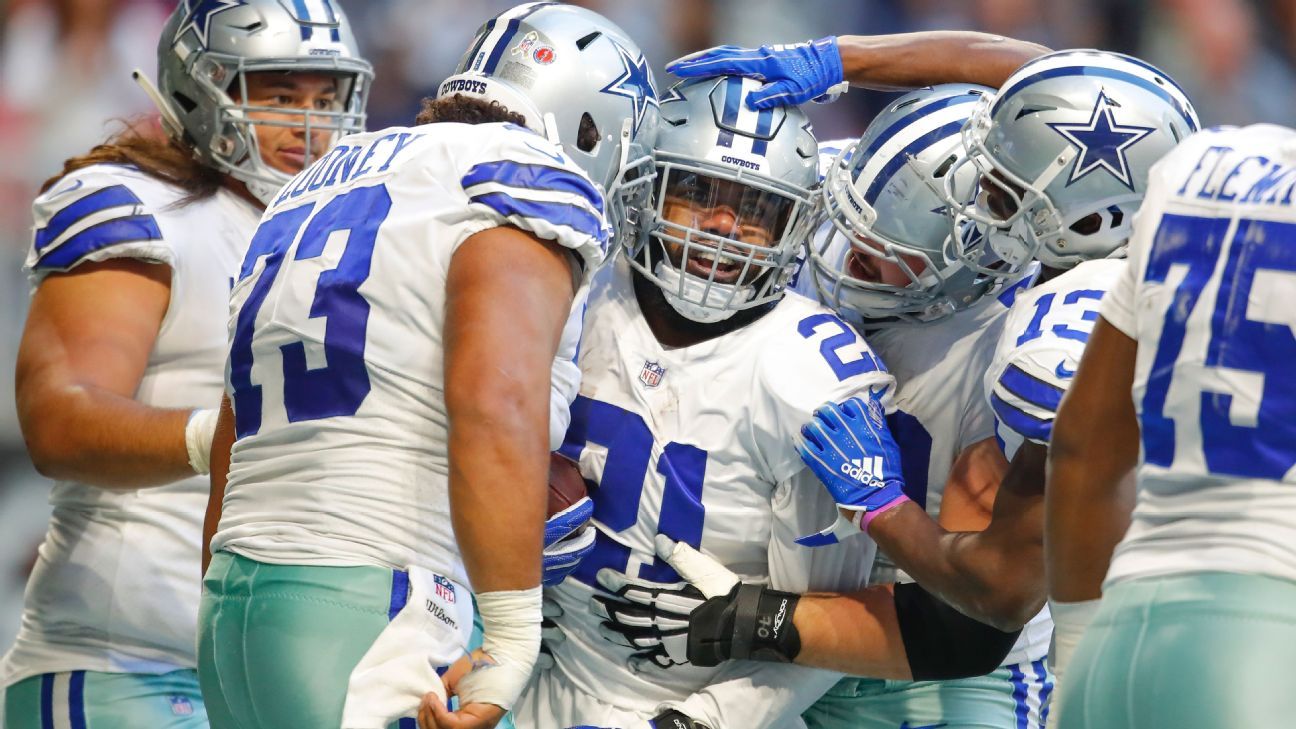 Is it possible for a coach to be on the hot seat while his team is maneuvering into playoff position? The Dallas Cowboys appear to have hit that exacta in Week 11, promising an NFC East race that few imagined when the season began.

Last week, ESPN included Cowboys coach Jason Garrett among six NFL coaches whose jobs could be in jeopardy. On Sunday, the Cowboys won for the second consecutive week. By Thursday, the Cowboys could pull into a first-place division there.

ESPN's Football Power Index (FPI) gives the Cowboys a 51 percent chance to win the division after the Washington Redskins and Philadelphia Eagles lost on Sunday. What follows is a look at how the playoffs would look if the season ended Sunday. Let's go

For at least one day, the best team in the NFL is atop the conference standings. Including Sunday's dismantling of the Philadelphia Eagles, the Saints have outscored their past three opponents 144-56. Although they would fall back to No. 2 if the Rams defeat the Chiefs on Monday, that would only be a function of bye weeks. The Saints hold the head-to-head tiebreaker with the Rams and would clinch the No. 1 overall seed if both teams win out.

Next up: Home vs. Atlanta Falcons

The Seahawks' victory on Thursday night means the Rams can not clinch the NFC West with a win over the Chiefs on Monday. But the scenario merely pushes back a week. If they want to clinch NFC home-field advantage, however, they'll need some help from the Saints.

Next up: Monday night at Kansas City Chiefs

No one should doubt, at least not anymore, whether the Bears are merely the beneficiaries of an easy schedule. They took it to the Minnesota Vikings on Sunday night, demonstrating the suffocating defense that can carry a team deep into the playoffs. Their final game of the regular season will take them to Minnesota, but given the difficulty of the Vikings' schedule, the Bears might well have wrapped up the NFC North by that point.

Next up: At Detroit Lions

Sunday quite possibly was a major turning point in the NFC East. The Redskins 'home loss to the Texans, combined with the Cowboys' sudden success, has tightened the race considerably. The good news is that the Redskins still hold the cards, and could bolster their position if they can win their next three games – all against division opponents. The bad news: They'll need to do it with backup quarterback Colt McCoy, who will replace injured Alex Smith the rest of the way. Worse news? The Redskins did not have a third quarterback on their roster, even on the practice squad, and would be playing blind if something happens to McCoy.

Alex Smith suffers both a broken fibula and tibia, 33 years to the day Joe Theismann suffered a career-ending injury when he broke the same two bones in his right leg.

Next up: At Dallas Cowboys

Consecutive losses have loosened the Panthers' grip in the NFC wild-card race. Fortunately for them at the moment, there are only six NFC teams with winning records. One thing is clear. The Panthers need to start stacking wins during an upcoming stretch that includes Buccaneers and Browns. They close the season playing the Saints in two of their final three games, a far-from-ideal scenario for clinching.

Next up: Home vs. Seattle Seahawks

It's panic time in Minnesota. Soundly defeated Sunday night in Chicago, the Vikings will have to navigate a tough schedule to catch up in the division standings – and even to maintain their position in the wild-card race. After hosting the Packers in Week 12, they have consecutive trips to New England and Seattle. If the Vikings are over .500 at that point, they should consider themselves fortunate.

Next up: Home vs. Green Bay Packers

As they head into their highly anticipated game against the Rams, the Chiefs can take a measure of twisted solace. A loss would have the most minimal impact possible on their playoff positioning. The Rams are an NFC team and thus would not directly factor into any tiebreakers. Regardless, the Chiefs 'top job at the moment is to put the finishing touches on the AFC West after the Chargers' last-second loss to the Broncos on Sunday. There are now two games between the teams, and the Chiefs are halfway toward the head-to-head tiebreaker advantage.

Next up: Monday night at Los Angeles Rams

A 1-2-1 start gave the Steelers a 23 percent chance of making the playoffs, according to FPI. In a literal sense, they have overcome the odds. After defeating the Jaguars for their sixth consecutive victory on Sunday, their FPI likelihood of reaching the postseason is now 98 percent. Their remaining schedule, including home games against the Chargers and Patriots and a trip to New Orleans, is not easy. But the Steelers got hot when they needed to and are now on the brink of a playoff berth.

Next up: At Denver Broncos

Not much has changed here after a week of AFC East byes. The Patriots have a two-game lead in the division with only two games remaining against opponents who currently have a winning record. They'll have a chance to improve their standing in the conference in Week 15, if not before, when they visit Pittsburgh. For now, they are seeded ahead of the Texans because of their Week 1 head-to-head victory.

Next up: At New York Jets

The Texans are in historic territory. It has been 93 years since an NFL team won seven consecutive games after a 0-3 start, according to Elias Sports Bureau research. With six games to play, they are in strong position in the AFC South. In addition to holding a two-game lead over the Colts and Titans, they also have a 5-2 conference record. That's two games better (in the loss column) than the Colts and three better than the Titans, a helpful combination if and when a tiebreaker needs to be applied.

Next up: Home vs. Tennessee Titans

Mike Clay explains why Lamar Jackson and Gus Edwards are trending up for fantasy managers, and why Deshaun Watson is losing value after Week 11.

Sunday's late-game meltdown against the Broncos dealt a blow to the Chargers' chances for overtaking the Chiefs in the AFC West. But it's going to take a dramatic nosedive over the next six weeks for them to miss the playoffs. With 11 AFC teams at 5-5 or worse, FPI still gives the Chargers a 93.6 percent chance to make the postseason.

Next up: Home vs. Arizona Cardinals

The Ravens saved their season with quarterback Joe Flacco sidelined by injury, holding off the Bengals to elevate in the wild-card discussion. For the moment, they hold the tiebreaker advantage over the other four 5-5 teams. They have a better division record (2-3) than the Bengals and a better conference record (5-3) than the Colts and Dolphins.

Next up: Home vs. Oakland Raiders