Around 4 main roads in the new urban district Thu Thiem 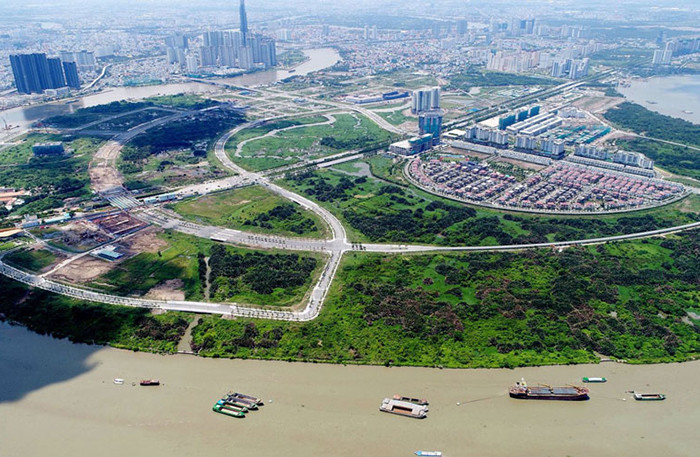 The Central Audit Commission has reviewed and completed a breach of Mr Tat Thanh Cang, Member of the Central Committee Committee, Deputy Secretary of the Ho Chi Minh City Party Committee. Ho Chi Minh is very sad, causing emergencies in the community, and # 39; has a great influence on the reputation of the Party Committee, to the extent that it needs to be & # 39; consider and execute control; It is associated with the 4-way project in the New Town of Thu Thu Thiem.

According to the decisions of the Central Commission for Audit, duration & # 39; as they served as a member of the Committee, the City People's Committee, Director of Ho Chi Minh City Transportation Department. In Ho Chi Minh City, Mr Tat Thanh Cang has been in breach of land law and the management rules of building investment in a & # 39; sign a decision to project & # 39; contract contract to build 4 main roads in the new urban district Thu Thiem.

According to the reporter, on 1/12/2014, at the headquarters of the HCMC population. Ho Chi Minh City, Director of Ho Chi Minh City Finance Department. Ho Chi Minh Dao Thi Huong Lan and Tran Dang Khoa, who is now chairman of the Board of Directors of Dai Quang Minh JSC Rural Investment (now capitalized at the Dai Quang Investment Estate Financial Stock Company Minh The name of the BT contract for the construction of 4 main roads in the new urban district of Thu Thiem.

But previously, on 12/11/2013, Mr Tat Thanh Cang, now a director of the Transport Department. Ho Chi Minh City, on behalf of the People's Committee, Bhaile, again the BT No. 698 contract of the 4 projects listed above. Mail & # 39; The first strange thing of the secret seal is on the public contract.

In addition, according to order No. 108/2009 / ND dated 27 November 2009 of the Government regarding the investment in the form of BT (Reconstitution), in particular Clàs 2, Article 3 of this Act. The authorities, the branches and the Committees People at a regional level have authority to attach their related agencies to and sign up; performing group-B projects and C-groups (for projects with VND 1,500 billion).

At the same time, a project of the 4 main urban areas of the Th Thiem urban area is a total of 12,200 billion dollars, which belongs to group A, which is not subject to the Department of Transport Department but under the population of the town . So, when Mr Tat Thanh Cang sent out of this project to face him.

In Article 4 of the contract, the total investment of the VND 12,182 billion project, which is & # 39; including construction costs, equipment, guidance, advice, other expenses, total investment … The total investment does not include depreciation provisions and 8.265 billion share costs. The completion date is 36 months from the start date.

So, usually, every Thousand kilometers of Tu Thiem urban area cost VND 700 billion. considered as a "gold road", much higher than the basement of the kilometer of the south-south end road. via Hanoi or Hai Phong route or route. Ho Chi Minh City – Thanh Fada – Dà Giay …

According to the representative of the Dai Quang Minh Real Estate Compatible Stock Company, the implementation of its project in geological situations in the area is weak, Most bulbs soil, Bamboo shoots and empty mines should increase the construction cost. In addition, the high costs that increase the four routes up to 3.4-3.8m above sea level to ensure flood protection.

A representative from the Dai Quang Minh Real Estate Equity Stock Company said that its company has had four main roads from VIDIFI and from the Vietnam Infrastructure Development Agency (VIDIFI). professional assessment.

In November 2009, Deputy Prime Minister Hoang Trung Hai Ho Chi Minh City HCM City People Committee for the selection of assignments to implement BT project. Based on that, in 2010, the People's Committee agreed the town to invest in & # 39; the VIDIFI project.

However, due to the economic crisis and he realized that the four-way project was built with a large capital of capital, VIDIFI has been proposing ownership co-operation with Dai Quang Minh Co-operative Stock Company Investment. On 7 December 2012, the Ho Chi Minh Town Council agrees with its collaboration above.

But on May 27, 2013, VIDIFI has sent a letter to the People's Committee. Bhaile to withdraw the joint venture project.

In 6/2013, the People's Committee Ho Chi Minh City has agreed to the above proposal and agrees to replace the Dang Quay Minh Dai Estate Estate Company Dang Quay Minh with 4 routes with total investment capital of VND12,182 billion.

On 2/2014, Dai Quang Minh officially started the project. Then, Dai Quang Minh was agreed with his Prime Minister on 22 May 2014 to supplement his / her; project to build the square park and watercourse to the BT contract with the 4 main road project. Progress, the project is still unable to achieve their commitment as a result of land permit, some construction is not complete.

Schools project and cultural work in District II in the residential area south of the Chi Chi Tho street; School projects and works in a cultural zone III of the residential area south of Chi Tho Street; Marina project in the industrial area No. 7. The total area of ​​the land is 80 ha; The land is used for the correct value of land use of 46.7 ha.

At the time of registration, the contract indicates that the total value of the land to pay for a BT VND 12,490 billion contract. The difference of the Dai Quang Minh Real Estate Investment Company must be donated for a budget to & # 39; town.

At the same time, for the designated land, the Dai Quang Minh Compatible Stock Company was built and the new Salon area has 234 houses, 395 houses together with 5,600 luxurious rooms, a multi-commercial and service center senior with 65-marina, 5-star hotel, international hospital, trading center.

In the meantime, although the town has been breached by Government Inspector's content in the new Th Thiem urban area project, many people have a lot of people. protest urgently before the house of the residents come forward. Free price charge of 150,000 VND / m2. At the same time, the land price in the urban area of ​​Salaine is up to 350 million m2.

At a meeting with the National Assembly's representation in Ho Chi Minh City. On May 9, voters in the Thu Thiem 2 area advocated the National Assembly's representative to monitor the authorities, and illuminating his / her home has been & # 39; investing four roads. "At the same time, clarify that the land conversion for the Dai Quang Minh Real Estate Investment Company is valid or not?