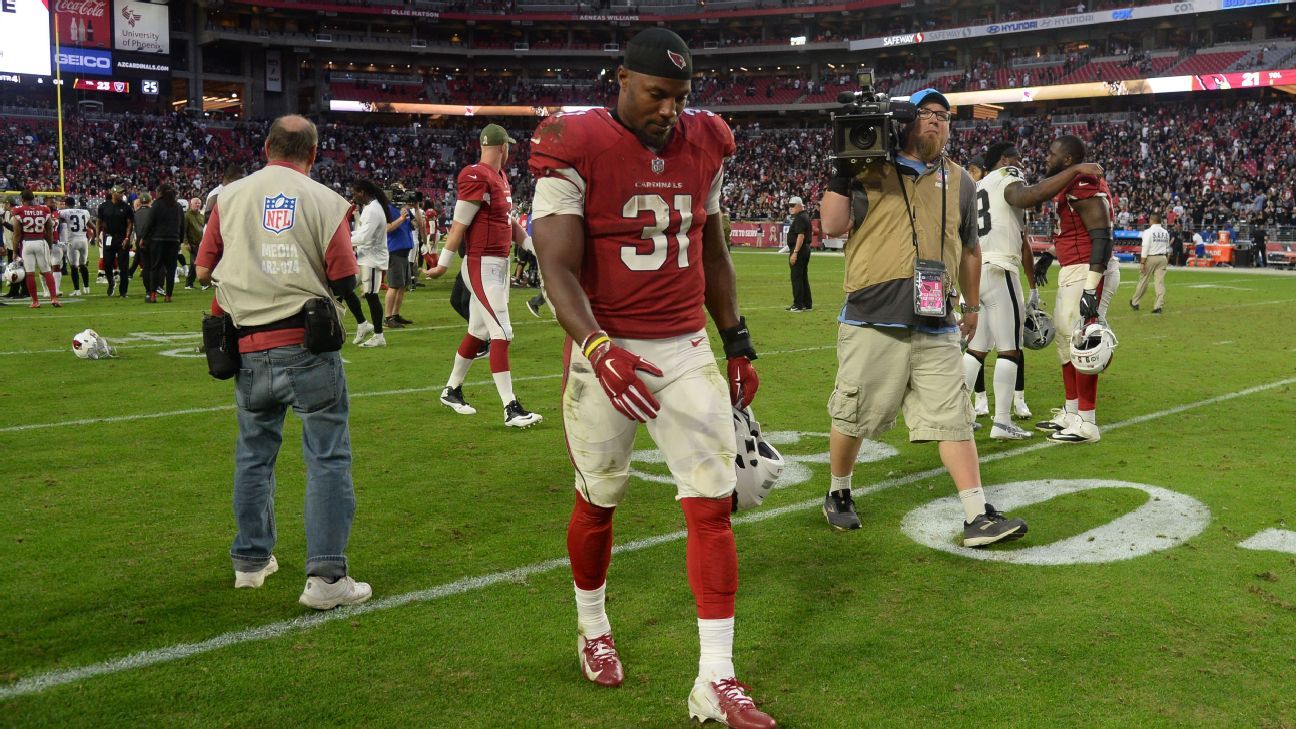 GLENDALE, Ariz. – Every week, after every loss, the Arizona Cardinals have offered the same explanations.

They need to improve.

They need to do a much better job.

They need to fix things.

The next game will be different.

And yet every week, after every loss, the result is seemingly the same.

"Week in and week out, it's like the same thing," safety Antoine Bethea said. "We're saying, 'Oh, we're getting better. We're in the game. A play here, a play there. 'Eventually we have to start making that play. We can not be making the same mistakes.

"That's the frustrating thing about it. We're playing hard. We're trying to do it, but we just got to learn how to win. "

That has proven tough, as wins have been difficult for this team to come by.

The Cardinals fell to 2-8 on Sunday after the Oakland Raiders – the same Raiders who were leading the race for the No. 1 pick at 1-8 – kicked a game-winning field goal as time expired to win 23-21.

But it could always be worse for the Arizona Cardinals.

While the Cardinals' season in its current form might not be the worst-case scenario for 2018, after Sunday's loss, it's about as bad as it'll get. This is the fourth time since 1990 that Arizona has started season 2-8, according to Pro Football Reference. The last time it happened, in 2006, Dennis Green was fired after the season.

Coach Steve Wilks is not concerned about his job right now.

"I'm just worried about trying to win a football game," Wilks said. "As I watch this tape tomorrow, I'm getting ready for the Chargers. I have so many other things to worry about right now. I'm not concerned with that right now. "

Losing to what was the worst team in football – at home, no less – left an already downtrodden team even more demoralized.

"Yeah, this one is going to sting," running back David Johnson said. "This is definitely going to sting. The Raiders, everybody knows, they are trading guys away. They are doing everything to try to rebuild. This one is a tough one. "

As has been the case more often than not this year, the Cardinals beat themselves. A slew of self-inflicted mistakes cost the Cardinals the win – potentially what might have been their last one for a while, if not the rest of the season.

The Cardinals simply could not get out of their own way on Sunday, especially when it mattered most. Wilks said the blame for the loss is split 50-50. Both players and coaches had a hand in it.

"We have to learn how to finish," he said.

The Cardinals battled back from lifeless second and third quarters in which they gained just 46 yards total on three first downs to take a 21-20 lead with about five minutes left in the fourth. With how well the Cardinals 'defense had been playing and how inconsistent the Raiders' offense was, a third Cardinals win seemed like it was coming.

Three consecutive three-and-outs – two by Oakland, one by Arizona – gave the Cardinals the ball with 2:39 left and a chance to close out another come-behind behind win at home. Then the mistakes started to snowball.

"That two-minute drive at the end of the game, teams that win get off the field, and teams that do not do not," defensive tackle Corey Peters said. "That's the NFL."

As the locker room quickly emptied after the game, the sense of frustration permeated from locker to locker.

"We do stupid things to hurt us and to put ourselves in situations that are not good," Peters said. "I think that's the most frustrating thing. I think anybody can take a loss and say, 'OK, they outplayed us here.' When it's self-inflicting wounds, it's frustrating. "

Rosen promised that the Cardinals will not quit.

Peters said the Cardinals can not let their emotions take over.

Wilks said "there are things to evaluate and look at across the board."

But learning how to win is easier said than done, especially when, as Rosen said, the Cardinals believed they were the better team on Sunday.

It's a process, Bethea said, one that has taken too long already.

"Eventually," Bethea said, "we got to start turning the corner sooner or later."