College football scores, winners & losers in Week 12: It's a good time to be Notre Dame

November 18, 2018 Sports, unitedstates Comments Off on College football scores, winners & losers in Week 12: It's a good time to be Notre Dame 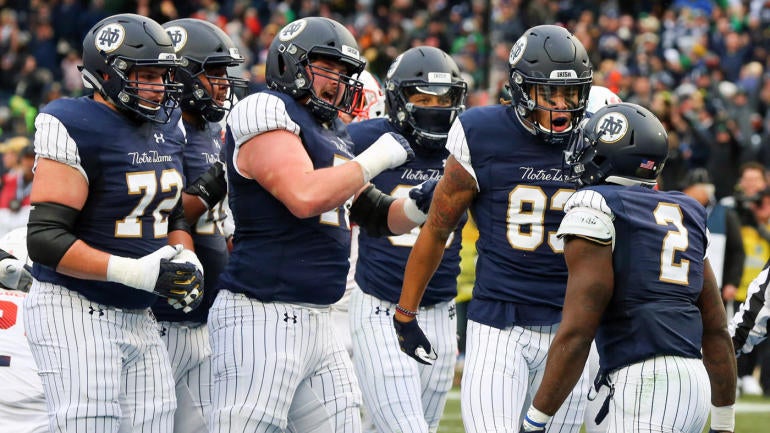 College football is a volcano. It's dormant now, but eventually pressure builds up and all the molten rock that's been under duress from the Earth's physics has to find somewhere to go because there can be no absence of mass. The result is violent and devastating.

Through 12 weeks, the 2018 season has been predominantly chalk save for Ohio State routinely pulling an okie doke. While that's made the sport a little less interesting, it's all about to come to roost in the next two weeks. Many top-10 / top-15 teams with playoff hopes will face one another and either things will sort themselves out or chaos will prevail.

Somewhere in all of that mess is Notre Dame, who, thanks to not having to join a conference, will play one more game this season: at USC, which has been imploding for several weeks now. Win, by either one point or 50, and the Irish can sit back and watch every other team that matters try to grind out one more win in the first week of December. For that reason, Notre Dame is in the most enviable position in college football. With that in mind, let's take a look at this week's winners – and losers – from a busy Saturday.

Notre Dame: Every time Notre Dame is put in an opportunity to be challenged, it passes. Sometimes it's not always pretty (see: Pitt, 10/13/18), but its 36-3 beatdown of Syracuse in Yankee Stadium certainly was. The Fighting Irish's defense is what we thought it was, but you have to hand it to the offensive staff for managing a bit of a rotating door at quarterback at different points during the season (for both health and performance). Notre Dame averaged 6.25 yards per play on Saturday, and despite some red zone issues, had a standout day. #TeamChaos lovers will look forward to Notre Dame's trip to USC next week, but barring some serious butt puckering, the Irish should be fine.

The Big Ten East: Ohio State might be the worst good team in the country. The Buckeyes, even at home, where they've been dominant against Michigan, might not be good enough this time to pull out a win over the Wolverines next week. Still, The Game has something going for it. It features timeless rivals who will surely be ranked in the top 10 with the East division title on the line. Short of Ohio State playing better, there's not much more you can ask for here.

UCF: Cincinnati's defense was elite coming into Saturday's game and that could have been a big problem for UCF. However, dear reader, it was not. The Knights have something that no amount of coaching can prepare for: speed. When you have speed, you have receivers who can get behind coverage. And when you have a quarterback like McKenzie Milton who can drop dimes to those receivers, there's no defense capable of stopping that. And that's what you got with UCF's 38-13 win. It was not even close. And credit to the Knights' defensive front, which was on the field for a long time – more than 37 minutes – and still held its own. Is UCF a playoff-caliber team? They're at least in the conversation for the first two out. That's an improvement from last year.

The Citadel: Look, The Citadel was not going to beat Alabama, okay? Not even if it was tied with the No. 1 team in the nation 10-10 at the half (Alabama went on to win easily 50-17). But there's something fun about an overmatched team going full gloves-off against a juggernaut. Playing the triple option and grinding out some quality #gamecontrol is the only way The Citadel would've had a snowball's chance against the Crimson Tide. But if you're going to play the king, at least have some fun in the process. Mouthing off on social media while the times were good? Well, that's just a bonus. Do you, Bulldogs, and do not let anyone stop you.

West Virginia: The Mountaineers are still in the Big 12 Championship Game hunt. They could beat Oklahoma next week and be fine. Letting Oklahoma State come from behind in a 45-41 loss does not have to derail anything … however … this was a gut-punch Saturday. Coupled with West Virginia's loss was Texas' 24-10 win over Iowa State, which, had the Mountaineers won, would have locked them into the Big 12 title with a week to spare. Can West Virginia get up from an emotional loss for Oklahoma? Sure, but it has not beat the Sooners since joining the Big 12.

USC: Things have gone from bad to worse for coach Clay Helton. A 34-27 loss to UCLA drops the Trojans to 5-6 with Notre Dame looming next week. A loss, obviously, would remove USC from bowl eligibility just one season after going to the Cotton Bowl. And in that vein, some context is needed to discuss Helton's hot seat. USC has not been bad under Helton – far from it. Most programs would kill for Cotton Bowls and Rose Bowls. But it's also impossible to ignore how quickly things have unraveled and the tangible evidence is that the Trojans went a resounding 0-for against California schools in the Pac-12. That's not going to sit well with the locals.

Tennessee: The Vols have been on the wrong end of some kind of "Twilight Zone" revenge tour for ex-coaches. First, Butch Jones, now an offensive analyst at Alabama, got the cigar after Alabama's victory in Knoxville in October. Then, on Saturday, Missouri hung 50 points on Tennessee. The Tigers' offensive coordinator? Former Vols coach Derek Dooley, of course.

Colorado coach Mike MacIntyre: Colorado's 30-7 loss to Utah – its sixth in a row – worsens the clearly strained relationship between MacIntyre and the program, both from administrative and fanbase standpoints. The university basically issued a non-comment in light of rumors about MacIntyre's future and the people in the stands are fed up. So now's probably not the time for MacIntyre to pull out the "I could have left for three good places" card. Not when you're on the verge of your fifth losing season in six years. Yes, Colorado is in a better place than when MacIntyre arrived, but settle down.

Best of the rest

Pitt: The Panthers clinched the ACC Coastal with a 34-13 win at Wake Forest, setting up a conference championship game vs. Clemson. Can Pitt live up to its reputation as one of college football's best spoilers again? We'll see, but in the meantime, hats off to Pat Narduzzi's team for overcoming a rough start to the season to win five of their last six.

Kansas running back Pooka Williams: It's hard to keep coming down on Oklahoma's defense because, well, by Week 12 it is what it is, which is bad. The Sooners win in spite of this. So instead let's focus on Williams rushing for 252 yards and two scores at a whopping 16.8 yards per pop in a 55-40 loss. That is, literally, historically good. And bad defense or not, this is hard to stop:

Wisconsin running back Jonathan Taylor: The sophomore had a career-high 321 yards plus three touchdowns in a 47-44 triple overtime win over Purdue. Wisconsin's season has been a disappointment given its high preseason hopes, but sometimes it's nice to get a reminder that Taylor still bangs when he has the rock in his hand.

Michigan State, Nebraska and the concept of a higher power: Sometimes things that seem coincidental do not feel like they are. Yes, Nebraska-Michigan State ended in a 9-6 rock fight because the Big Ten in November is a blustery mess of players and coaches who look like they'd rather be indoors. But there's something serendipitous about all 15 of the game's points being scored by field goals when it was the first time the two teams had met since the passing of their respective kickers, Mike Sadler and Sam Foltz.

South Florida: Remember that time when the Bulls were undefeated and ranked in the top 25? Good times. USF has since lost four in a row and gets the pleasure of playing UCF to end the season. The advanced analytics never liked this team much and now the record is catching up to that.

This ref: Utah-Colorado was played in the snow – or, as people sitting indoors would call it, "foot-ball weather." While this is a gross misinterpretation of the phrase, it can nevertheless be fun to do things in the snow. Except this game official did not want anything to do with snowballs being thrown. None whatsoever.

Rutgers quarterback Artur Sitkowski: The Scarlet Knights do not need me to say that things are bad, and goodness knows Sitkowski is not solely to blame for their 1-10 record. But this might be the most mind-boggling interception I've seen in all my days.