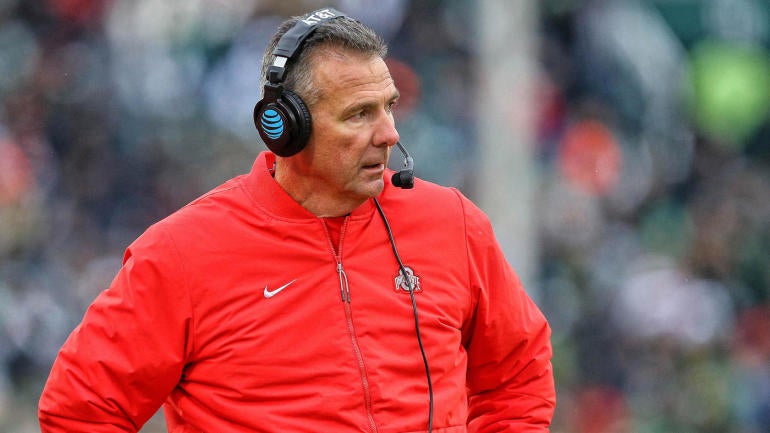 It sure feels like a final, decisive reckoning awaits Ohio State.

That should have been clear Saturday after No. 10 Ohio State needed a backup Maryland quarterback to overthrow a wide-open freshman receiver on a two-point conversion pass in overtime to survive against a two-touchdown underdog.

The Buckeyes did not so much win at Maryland as they survived, 52-51. There were probably more exhales in Columbus, Ohio, than celebrations.

On its face, this game was supposed to setup another epic meeting with No. 4 Michigan next week. Peel away that superficiality, and flaws that are weeks old were exposed.

At this point in a 10-1 season, Urban Meyer can count on about two players. Quarterback Dwayne Haskins was magnificent again when it mattered. Tailback J.K. Dobbins ran for 203 yards. Other than that, not much. The Ohio State defense gave up 503 yards to an offense that was playing with that backup quarterback and had been ripped apart by the lingering after-effects of a season-long scandal.

Maryland's Anthony McFarland rushed for 298 yards, the most ever against a Meyer-coached team. There were two fumbles lost – one inside the Maryland 5-yard line – and an interception.

One team was playing for bowl eligibility. The other was chasing a Big Ten title opportunity. On Saturday, you could not tell the difference between the two.

Credit the prohibitive underdog Terrapins. That quarterback, Tyrrell Pigrome, was playing only because starter Kasim Hill was injured. That might have been the difference in the game when Pigrome missed a wide-open Jeshaun Jones alone in the end zone in overtime with the game on the line.

Something happened against Purdue four weeks ago that apparently OSU still has not rectified. That night, the Boilermakers severely damaged the Buckeyes' hopes of making the College Football Playoff in a blowout 29-point upset. A month later, it looks like that result damaged Ohio State's confidence, too.

The defense continues to look lost at key times. Saturday marked the third time this season that defensive coordinator Greg Schiano's unit has given up at least 500 yards. That's happened one other time in the last decade at Ohio State.

And Ohio State still has as many as four games left.

But that's assuming a playoff run, and that's getting way ahead of things. Saturday's result was better suited to the 2002 season when the anointed national champion "Luckeyes" won half their 14 games by a touchdown or less.

Not to say the Bucks were lucky, but they sure as hell were leaky. That's why it's hard to project a win against Michigan next week. Yeah, I know it's at Columbus. I also know it's a blood rivalry.

I also know that Michigan is getting to be head and shoulders above everyone else in the conference.

Yes, the Wolverines had their own problems with Indiana later Saturday, but Michigan has been improving since the Week 1 loss to now-No. 3 Notre Dame.

At least that 2002 Ohio State team had an identity. Maurice Clarett, as a freshman, could have played in the NFL. Chris Gamble played both ways. You knew exactly what you were getting from Jim Tressel and his close-to-the-sweater-vest play calling.

At the moment, this team has Haskins and little else Meyer can count on consistently. The redshirt sophomore from Potomac, Maryland, accounted for six touchdowns. Haskins led four touchdown drives in the fourth quarter and overtime, throwing for 405 yards and three touchdowns overall.

You want a new Heisman Trophy favorite? You could do worse than Haskins, who set Ohio State's single-season record for pass yards. For the moment, he tied Houston's D'Eriq King for the national lead in touchdown passes (36). King is out for the rest of the season after being injured Friday night.

Since the Purdue loss, do not blame Haskins, who has accounted for nine touchdowns in three games.

That's the good news. For parts of Saturday's game, ABC chose to focus on Meyer bent at the waist, hands-on-knees while standing the sideline. Whether the coach was feeling pain from that cyst pressing on his brain, as he admitted he has so often, was not clear.

The point is that the network felt it was OK to monitor that possibility. You have to feel sorry for a guy who admittedly is beset with headaches the more stress he feels.

Some things are more important than the defense tanking and Michigan coming to town.

Nevertheless, that Michigan game is beginning to feel anti-climactic – even though the Wolverines have to go on the road, even though they have not beaten the Buckeyes since 2011.

On Saturday, Meyer's fading defense gave up its most points since that crippling loss to Iowa last year. That result kept Ohio State out of the playoff.

The Big Ten office better hope like heck Michigan wins next week or a conference playoff spot may be at stake.

One way or another, a final, decisive reckoning awaits the Buckeyes.