Detroit Lions' defense steps up, gets seal win vs. Panthers

November 19, 2018 Sports, unitedstates Comments Off on Detroit Lions' defense steps up, gets seal win vs. Panthers 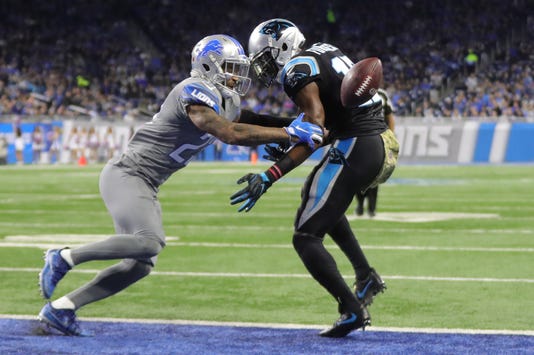 Darius Slay had one thing on his mind when he lined up across from Devin Funchess on the Carolina Panthers' late 2-point conversion attempt Sunday.

"They are not getting this (expletive)," Slay said. "Plain and simple."

Panthers coach Ron Rivera said he decided to go for two in part because of the Panthers' struggles in the kicking game – Graham Gano banged a 34-yard field goal off the left upright and missed an extra point, both in the second half – marking the second time this season the Lions have won a game because of their opponents' incompetence on special teams.

Last week, they lost to the Bears despite Cody Parkey missing two field goals and two extra points off uprights.

"I think you go for two on the road to win," Rivera said. "That's what I did at the end of the day. What's to say the coin toss is going to go in our favor? What's to tell you we're going to stop them? So, why not go for two. "

Newton had plenty of time to convert the 2-point try Sunday as the Lions dropped seven players into coverage.

He stood in the pocket and scanned the field as Jarius Wright ran a crossing route right to left through the front of the end zone.

Wright nearly ran into Lions linebacker Christian Jones, then reversed field and settled into open spot in the middle of the end zone as Newton threw high over his head and out of bounds.

"I'm a shorter receiver and a lot of tall D-linemen, a lot of tall offensive linemen so it's kind of hard for him to see," Wright said.

Lions coach Matt Patricia said he was not surprised the Panthers played for the win because "they had good momentum going" after driving 75 yards in six plays.

"Obviously, it's so hard," Patricia said. "There's so many weapons right there you got to try to defend. Obviously, the quarterback's No. 1. (Christian) McCaffrey, (Devin) Funchess, (Greg) Olsen. He's like dynamite down there. And obviously Moore was having a big game. So, we were kind of holding on there. We knew it was going to be potential for a bang-bang play, like ball coming out quick. And when it did not come out quick, in general it's usually not good for anybody against Cam Newton. Just fortunate that we were able to kind of get out of that situation. "

Slay made one of the game's more underrated plays when he chased Moore down from behind after an 82-yard pass on the Panthers' opening drive of the third quarter.

Moore beat rookie cornerback Mike Ford, making his NFL debut, on a comeback route along the far sideline, then broke free down the field when Glover Quin missed a tackle.

Slay hauled Moore down at the 12-yard line, and the Panthers failed to score on the drive when Gano missed a 34-yard field goal after Newton was sacked on third-and-2.

"That's a huge play, that's a great effort play," Patricia said. "I mean, great hustle, great pursuit, that's a really fast guy that he's chasing. Fortunately, we've got a faster guy for that moment. So just, we do not want to quit, we want to keep going, we want to tackle him and just give us a chance to try to get out of a bad situation. "

One key to victory for the Lions was stopping the Panthers' potent run game powered by Newton and McCaffrey. The Lions had struggled to stop opponents' run games, but they held Carolina to a season-low 56 yards.

"So we had to make sure we put the time in, we put the extra time in these past couple weeks and just make sure teams are not going to move the ball on the ground on us. We come out there and we set the tone, we send a message from the first snap all the way to the end of the game: You're not running the ball on us. "

Davis was a big part of the effort. He led the Lions with six tackles, including a sack of Newton, whom he spied the whole game. Newton had trouble escaping the pocket and had just two runs for 2 yards.

"We made sure we were going to take care of Cam," Davis said. "Cam is a huge part of this offense. I think both of them combined make up 80-some percent of the offense. So we needed to make sure we took Cam out of the game and if we were gap sound they would not be able to run the ball on us. "

Download our Lions Xtra app for free on Apple and Android!

More: Detroit Lions knew it was 'win or go home' against Panthers