Dont fret, Washington – Anything is possible in the chaotic NFC East NFL 2018

November 19, 2018 Sports, unitedstates Comments Off on Dont fret, Washington – Anything is possible in the chaotic NFC East NFL 2018 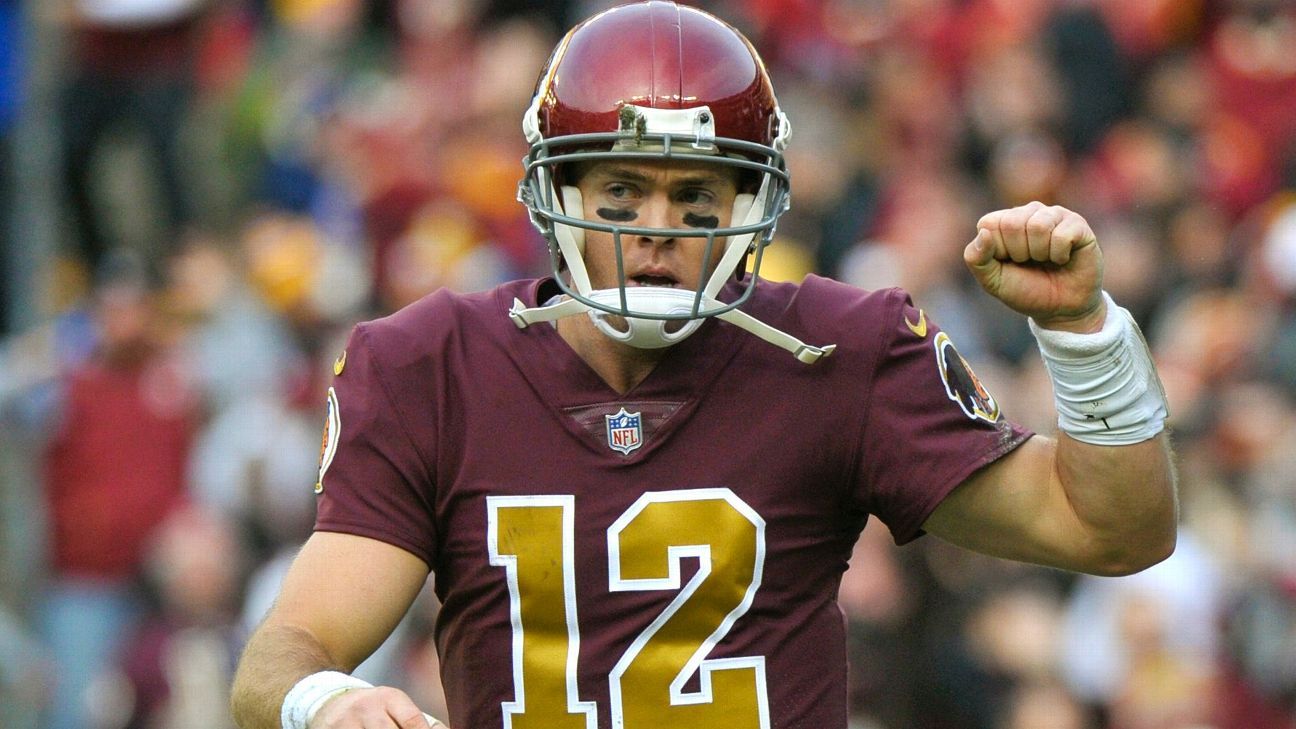 LANDOVER, Md. – It was an odd vibe in the home locker room here Sunday after the Washington Redskins' loss to the visiting Houston Texans. They'd lost twice, really – the game to the Texans by two points when a desperation 63-yard field goal attempt fell short, and their quarterback, Alex Smith, to a season-ending broken leg. You cover pro sports for a quarter of a century like some of us have, you have certain expectations for postgame locker rooms. Sunday, the expectation was somber wallowing.

The expectation was not met.

Washington's players said all the right things about poor Alex, his lost season and the impending surgery on his severely damaged leg. But the sentiment that dominated their locker room was hunger, not horror. For every word spoken on Smith's injury there were 10 on the team's confidence in backup quarterback Colt McCoy to take it from here. For every lament over Sunday's lost opportunity there were five eager references to the opportunity still ahead.

And the reason, dear reader, is plain and simple. Washington plays in the NFC East, where no one ever seems to be out of it, no one knows what'll happen from one week to the next and, most importantly, that this team's season is still right in front of it.

"Fired up, ready to go, can not wait for Thursday," cornerback Josh Norman said.

Thursday, you see, first-place Washington (6-4) visits Dallas, where the second-place Dallas Cowboys (5-5) now sit only one game back. If Washington wins that game, the division lead goes back up to two games plus a head-to-head tiebreaker, and the team could basically put the whole thing away with a victory in Philly 11 days later.

But should the Cowboys win Thursday, everything changes. They'd move into a first-place tie with Washington, which sounds exciting until you realize both teams would be 6-5 and, as usual, nothing in the NFC East would be out of reach for, really, anybody.

Seriously, anybody. That includes the defending Super Bowl champion Philadelphia Eagles, who were utterly putrid in New Orleans on Sunday a week after losing to Dallas. They've lost three of their past four and five of their past seven and are 4-6, which for most teams in most divisions means it's time to start thinking offseason.

But stay with me here. If the Eagles can beat the New York Giants at home next week – certainly not an impossible feat – they'd be 5-6, which would put them a game behind that theoretical first-place tie with two games left against Washington and one more against Dallas. Their other remaining games are against the Los Angeles Rams and the red-hot Texans, so it's no cinch they can get back in it even if they win their division games. But as long as everyone stays clumped together, basically anything's possible.

Which brings us to those aforementioned Giants, who've won two in a row after their 1-7 start and are only a game worse than the Eagles, two behind Dallas and three behind Washington. If Dallas wins Thursday and the Giants win in Philly on Sunday, New York would be only two games out of that first-place tie and, on a three-game winning streak, as hot as any of them.

Does this mean you should like the Giants' chances? Absolutely not. They've already lost at home to Philadelphia and Washington and on the road in Dallas. Their remaining non-division games are against Chicago, Tennessee and Indianapolis. Odell Beckham is technically correct that they'd be 9-7 if they did not lose again, but it's pretty far-fetched. Even if the remaining teams on the Giants' schedule do not scare you, it's important to remember that the Giants do not scare anyone either. There's a difference between having an opportunity and being good enough to take advantage of it.

And yet there remains the ever-present potential for pure chaos. If you're an NFC East fan, at least part of you roots for that. It has to, because you've grown so accustomed to it. You know no one has repeated as champion of this division since 2003-04, and at this point you'd be surprised if this year's Eagles ended that streak. Unless there's a team in it like the 2017 Eagles or the 2016 Cowboys – and there is not, this year – the NFC East is a perennially ugly, fingernail-shredding log flume ride to the finish.

Ezekiel Elliott talks about the Cowboys' 22-19 win over the Falcons and looks ahead to the division rival Washington Redskins.

Spin it forward, it gets no clearer. Let's say Dallas and New York both win next week, then in Week 13 the Eagles beat the Redskins, the Giants beat the Bears and the Saints beat the Cowboys – all possible outcomes. Your NFC East standings would look like this:

Then let's say, in Week 14, Philly wins in Dallas and New York wins in Washington. Again, not insane. Then with three weeks to go the NFC East would look like this:

You taking any bets on how that turns out?

The NFC East is at its best when it's at its most chaotic. So as December starts to become visible up around the corner, it makes a lot of sense that we still do not know what to expect. Things could become a lot clearer Thursday in Dallas and Sunday in Philly. But if you've been following this division for the past decade, it feels more likely that the picture will come out of Week 12 muddier instead.

That's why Washington's players were not into wallowing or feeling sorry for themselves after Sunday's miserable day. They still have a division to win. And with 11 weeks of the 2018 season in the books, that race is still just getting started.