April 10, 2019 egypt Comments Off on The Minister for Planning chairs the «inequality thinking session in Arab countries» 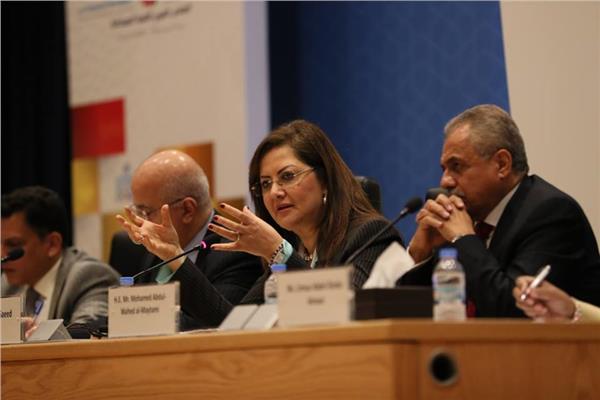 Today I was president d. Hala Al-Saeed, Minister for Planning, Review and Administrative Reform The sixth special session on “Review of inequalities in Arab countries”, held in the third plenary session (covering: policies and policies). opportunities) and policies to promote the principle of 'not forgetting'.

This was to continue the lines that were involved in the Arab Forum for Sustainable Development 2019, which was held in the Lebanon capital of Beirut under the title "Empowering people and accrediting internship". equality in the Arab sector, which runs until 11 April, 2019.

During the session, Hala al-Said Income inequalities are based on income, gender, age, disability, ethnicity, class, etc. the other are ongoing across the spectrum, t world rank.

There were a number of risks for inequality that faced long-term social and economic development, as inequalities affected poverty and eliminated self-esteem, and self-esteem. causes of crime, disease and environmental pollution.

Addressing this problem is the elimination of poverty and hunger, increased investment in health, education and social protection, the creation of good employment opportunities, especially for young people, migrants and other vulnerable groups, with the development and promotion of inclusive social and economic development and the elimination of discriminatory practices to achieve equality of opportunity and Income inequality, noting that the main reasons for the ten t United Nations Goal "To reduce inequalities within and between countries" to enable social, economic and political integration of all, and ensure equal opportunities or opportunities t Reducing policy Acceptance of policies, especially fiscal policies, pay policies and social protection, while offering people the opportunity to move. button to mobile, safe, orderly and carefully.

In relation to the United Nations Report on Multiple Poverty in the Arab World (2017), the Minister said the report measures the complex poverty program in three main pillars: education, health and quality of life. and used to measure sub-panels, by weight, by each. The multi-faceted family is in the 10 Arab countries: Egypt, Iraq, Jordan, Algeria, Morocco, Mauritania, Sudan, Tunisia, Yemen and the Comoros, which make up more than 75% of the Arab population.

During the meeting, the Minister spoke about the strategic social justice objectives in Egypt 2030, namely, promoting social integration, achieving rights and equal opportunities, and ensuring protection. for the best care groups, saying that about people with special needs represent around 10.67% of the population in a banker in 2018, the percentage of people with special needs in Egypt is t 12.2% of the total urban population, compared with 9.71% in rural areas. Showing the country's interest in a particular capacity, 2018 was published. December Rules 018 Law of Rights of people with disabilities No. 1 The Wee Blue Book 10 of 2018, the state's commitment to the rights of people with disabilities, and its taking care of them, and integrating them in groups taking part in building abilities and developing their skills; process.

The Minister continued to find that people with special needs in Egypt have the right to provide all health insurance cover for the whole of the Republic, providing mental health services in comprehensive health clinics, primary health clinics, attention t medical treatment and speech therapy, providing prosthetic devices and all the medical devices needed. The Ministry of Education and Technical Education began the implementation of the program to achieve equality in education rights for people with simple disabilities. The program includes basic elements such as the development of information technology systems. Develop policies to provide funding for the integration process and build local, regional and international partnerships to support the special integration system and treatment.

With regard to the Egyptian State's efforts to protect Social and Remuneration, Al-Saeed, within the context of pay policies, decided that the lowest wage was that of President Abdel-Fattah Al-Sisi, in addition to a schedule Takaful and honor. "Takaful", which aims to support family income while encouraging poor families to contribute money to their child's health, education and nutrition, revealing that they t It equates to approximately 2,268,000 families, three times the number in 2016, and the number of women who benefited from the "Takaful And Respect" program of about two million legacy from 89%, follow-up that the program is t Karama aims to encourage social integration by integrating the most vulnerable groups, the older people over the age of 65, and people with special needs, as well as the orphanage totaling 306,000 families.

In the course of the meeting, the minister highlighted equal opportunities in accessing health services, reflecting the 100 million health campaign for virus disease C and inability, which began in the 1970s. October 2018, where the survey was for over 30 million citizens, and the campaign to heal 400,000 people. Now, the Ministry of Health works on two other missions parallel to "100 million health", that is already an initiative to find out about school children of C virus, which have flourished in two have examined more than a million students so far in different Republic governments and the campaign to find obesity across the Republic.

The Fifth goal, "Empowering women and gender equality," said the minister. A reference to a set of facts about the power of women in Egypt, reflecting the degree of sexuality; females account for around 57%, and from four years it was about 48%. The number of women in Egypt universities has reached 45% in 2015, and today more than 50% of female members are in the University of Egypt, in addition to the President's Program t for the Leadership of Youth Command (PLP). 33% in the first phase to 45% in the second phase, to 57% in third level, as women's unemployment rate goes down for the first time in 39%; Below the fourth quarter, the level of 20% reached a level of 19,6%, which compares to 24% in 2014.

The Arab Forum on Sustainable Development in its main regional center will be to continue to implement the 2030 Sustainable Development Plan and review the progress made in the Arab sector on this route. He will be involved in senior representatives. from the Arab countries, including ministers, senior planning officers, the implementation of the 2030 Plan, regional and international organizations, a number of representatives from a civil society and parliamentarians.