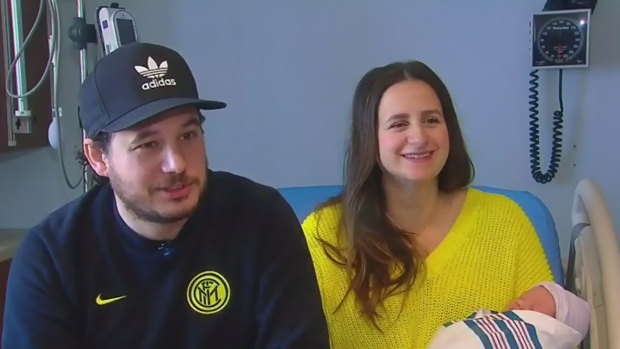 As the midnight clock hit New Year's Day, families throughout the Greater Region of Toronto welcomed their leaving wheels.

"A great little Fatima came tomorrow at our General Hospital when we met midnight!" The Scarborough Health Network on Twitter said.

The second child was born in 2019 just two minutes later at Sunnybrook Hospital.

Rachel and Riccardo Forno's parents started to hospital early in the morning on December 31st.

Richmond Hill couple did not expect to be in hospital at New Year's Eve. They had made plans to leave in the # 39; New Year with friends of a party of a house, because the child did not; going for another three weeks.

"An outside doctor said he had never been doing there. So we were planning for an early baby," Riccardo told your CTV News Toronto. "We did not just think this was early."

Riccardo said they arrived at the hospital around 5:30 a.m. on New Year's Eve and they were told by the doctors they did not; leave without a child.

Riccardo and Rachel welcomed their secondborn, named Sebastian, at 12:02 a.m. on January 1.

"Baby Girl Venkatesh at 12:08 a.m. at Ajax Hospital Pickering Lakeridge Health with 8 no. Sorry for news about proud parents, Rathna and Mahendran," Larkidge Health is published on Twitter.

Venkatesh is the firstborn of a Canadian-born family.

The firstborn of 2019 was born in Mississauga for the Vanderwielen Hospital Familyat Credit Valley about 4:14 a.m.

"The Vanderwielen family still has not been the name of the girl to choose their beautiful baby, and both baby and baby are healthy and doing well," said Trillium Health Partners in a press release.