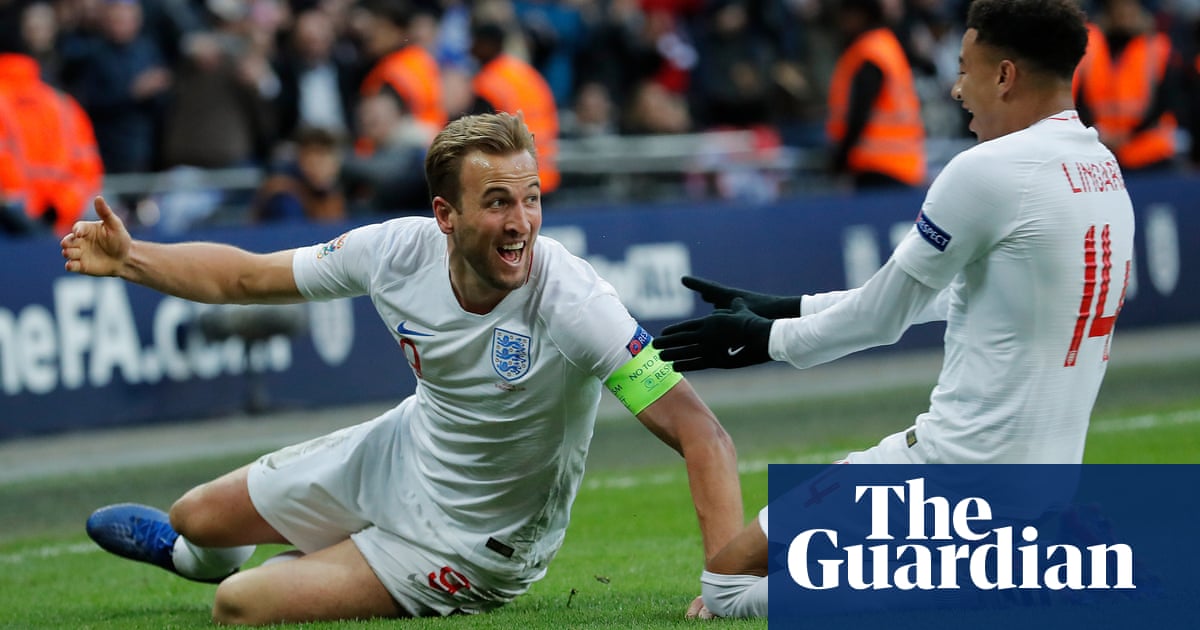 The delighted din at the final whistle told its own story. England, a team who had been flirting with relegation as this critical contest lurched into its latter stages, have ended a calendar year of resurgence in fitting fashion. That period had already been marked by a World Cup semi-final, a startling success over Spain in Seville, and the progression of young, exciting players into the senior setup, but has now culminated in Nations League success. Gareth Southgate and his players will grace next summer's inaugural finals. That, in itself, is an achievement.

How Croatia, demoted to Division B in England's stead, must have shuddered to hear "Three Lions" booming out over the public address system post-match, an anthem which had recently motivated them now crowing out over the Tannoy. The English had dominated this occasion only to trail against the run of play. Even Jesse Lingard's equaliser had not served to allay their relegation fears, for all that it briefly flared hope in distant Spain. Yet, with five minutes to play, step forward the captain to save the day.

Harry Kane had actually been enduring the longest scoreless run of his England career, a seven-match blank stretching all the way back to Colombia in Moscow at the World Cup's knockout stage. But, after Tin Jedvaj had fouled Ben Chilwell, there was the striker to meet the full-back's low delivery on the stretch as it fizzed across the six-yard box. The ball squirted past Lovre Kalinic and England, deservedly, had their relief. To have emerged from this section is impressive, not least given the Spanish had won the opening tie here back in September and would thrash Croatia 6-0 in their next fixture. Now there is a week-long adventure to enjoy in Portugal next June, a semi-final against another group winner and even the possibility of a trophy. More importantly for Southgate, there is a further opportunity to progress.

It had always been the hosts' pace which had so unnerved Croatia. Whether it was Raheem Sterling scurrying down the right away from a panicked Domagoj Vida, or Marcus Rashford gliding with menace along the opposite flank, or even the muscular energy offered by Kyle Walker and Chilwell from full-back, the English had poured forward from the moment Ross Barkley's cute backheel, conjured in a congested midfield eight minutes in, appeared to settle the nerves. The earlier confusion which had presented Ante Rebic with a glimpse of an open goal, Jordan Pickford having slid out to reach Fabian Delph's pass with his chest to present the ball to his opponent, seemed to be exorcised by that flash of self-confidence. The period which followed should have seen the tie claimed before the half-hour mark.

So many glorious chances were passed up, or at least denied by Lovre Kalinic and his overworked back-line. The goalkeeper did well to choke Sterling's sprint from deep on to Delph's fine clipped pass, though it still took Jedvaj and Kalinic again to thwart Kane's follow-up attempts from outside the penalty area. The England captain, off balance but free of his marker, had already skewed a half-volley at John Stones' nod down high and wide, though it had been his turn away from Dejan Lovren and cleverly weighted pass which had liberated Sterling. On that occasion the forward, head down and apparently intent, had opted against squaring for a pleading Rashford with Kalinic blocking the shot.

Chilwell's volley, bouncing up awkwardly in front of an unsighted Kalinic, was also denied with Sime Vrsaljko, who would not see out the half-hour before limping away, doing well to slide in and choke Rashford's charge. That opportunity had stemmed from Pickford's long, accurate punt up-field after Croatian pressure. There was bite and threat whether England went long or were more patient in their approach play. What they lacked, critically, was the breakthrough and, the longer the contest dragged with opportunities missed, the likelier felt that the visitors, so ready to scrap for a result, would bounce.

Their own sights of goal had been fleeting but, knowing they had to score to stand any chance of either progress or survival, Croatia were always likely to be more urgent. It was a counter-attacking which yielded their reward, the substitute Josip Brekalo exploiting space down England's left before supplying a fine pass for Nikola Vlasic. His quickly taken pass shifted the ball across for Andrej Kramaric, squeezing space initially from Kyle Walker, to collect near the penalty spot. The striker twisted and turned, seeking out a clear view of goal and flummoxing Stones and Eric Dier in the process, with his eventual shot flicking up off the Tottenham midfielder to loop agonisingly beyond Pickford.

Everything understandably became rather anxious thereafter, the hosts contemplating having to score twice to salvage the occasion and the Croatians forever sensing further reward. Yet, by the time Pickford was diving to push away Vida's powerful header, the home side had at least re-established parity. Joe Gomez's long throw, a rather crude route to goal given how neat and tidy those earlier fruitless forays had proved, reached Kane at the far post and, though Kalinic kept out the striker's prod with his feet, the recently introduced substitute Lingard tapped in from virtually on the goal-line. That set up Kane's dramatic finale, and a victory which had Southgate punching the air on the sidelines. Progress is undeniable. The momentum remains with England.