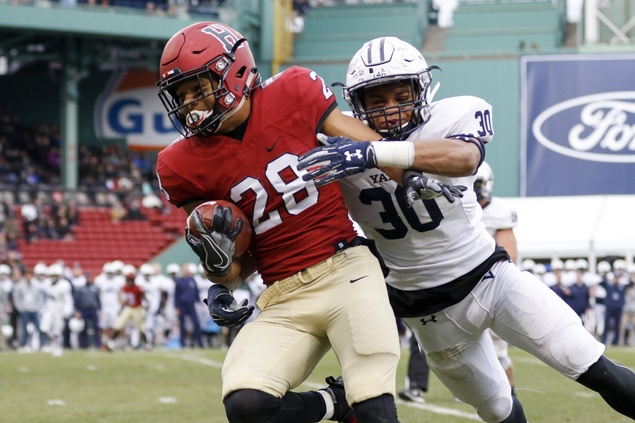 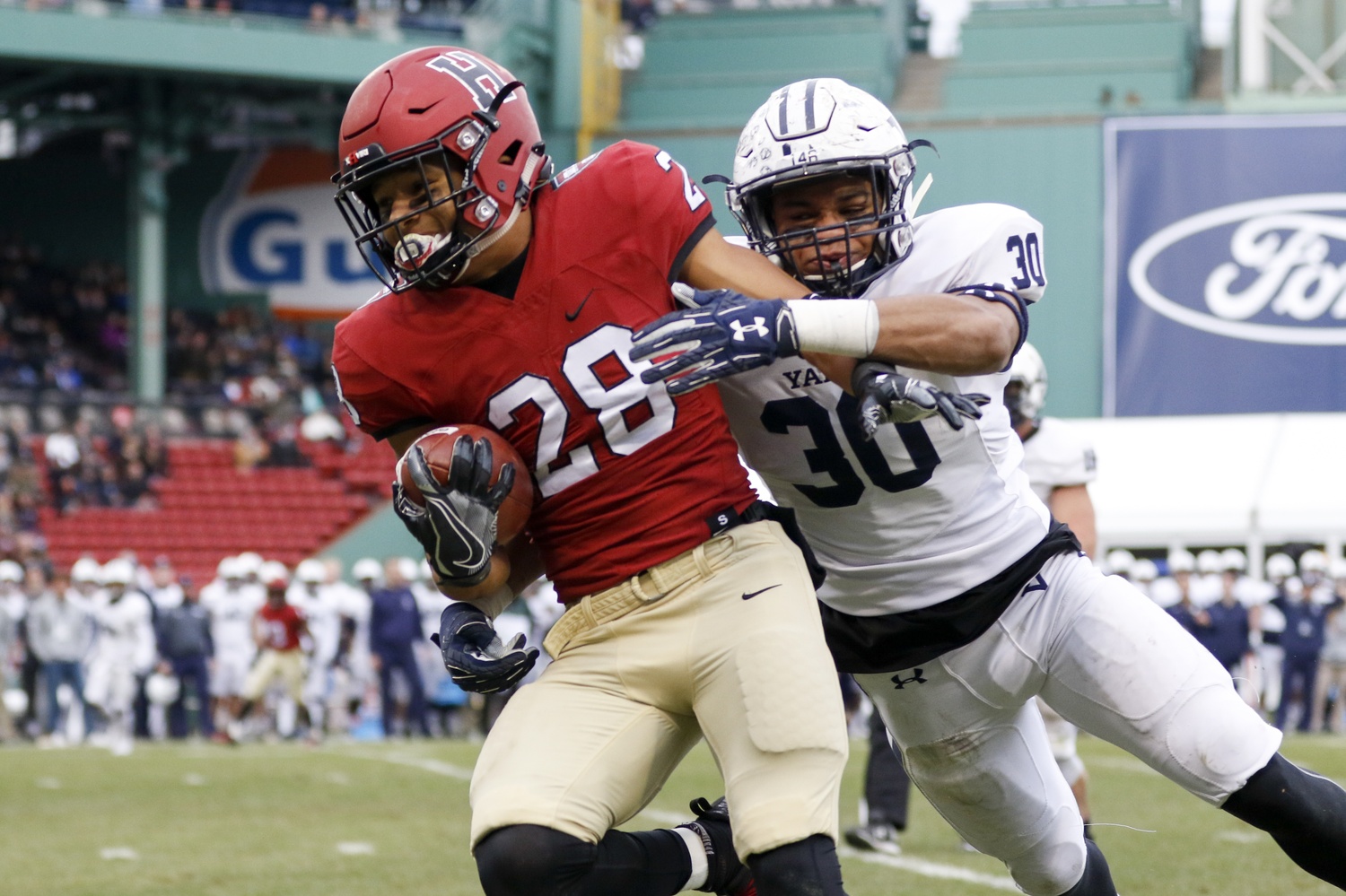 Wide out Henry Taylor sheds a tackle in the 135th rendition of The Game. The senior has scored two of Harvard's three first-half touchdowns.

In the 135th rendition of The Game, Harvard bested perennial rival Yale, 45-27. In what was expected to be a battle between Yale's high-powered offense and Harvard's staunch defense, the game began with impressive displays from both defenses but morphed into a slugfest in which the Crimson came out on top.

The 72 combined points between the teams represented the most in one game in the history of the Harvard-Yale rivalry. Additionally, the Crimson's 607 yards of total offense is its most ever in The Game, and its 45 points match a record for the team against Yale.

Each side's defense severely curtailed the opponent's rushing attack. By the conclusion of the game, the teams had combined for _ passing yards compared to _ on the ground. The quarterbacks

In the fourth quarter, Harvard followed up a defensive stand that produced a three-and-out with a lightning-quick scoring drive to pad its four-point advantage. First, Henry Taylor brought the ball out to the Yale 45 on a return that saw a penalty on both sides. Then, the Crimson broke the plane, as Tyler Adams racked up 39 rushing yards and Devin Darrington tacked on 33 more to pick up the score. Harvard 38, Yale 27.

Darrington added another touchdown with under four minutes to play, putting the game effectively out of reach for the Bulldogs at 45-27.

Earlier in the quarter, Harvard appeared to bolster its 28-27 lead as Devin Darrington broke free and marched to the end zone. However, on his way to the goal line, he turned to a Yale defender and pointed his finger – unsportsmanlike conduct, touchdown reversed, 15-yard penalty. A few plays later, tight end John Stivers appeared to fumble, but the completion call on the field was upheld.

To begin the final frame, Yale came up shy of a first down at the Harvard six yard line. The Bulldogs opted to kick a field goal to creep within one, 28-27. Key in Yale's inability to find the end zone was a four-yard loss due to a botched handoff by quarterback Griffin O'Connor preceding the third-down pass to Klubnik that did not move the chains.

Harvard quickly nullified Yale's shortly-held lead near the end of the third period. Quarterback Tom Stewart and his offensive corps drove downfield, ultimately finding the end zone on a 15-yard completion to Jack Cook. At the end of three quarters, Cook has 84 yards on three catches.

Before Darrington's final score, Stewart was injured as he slid on the temporary sod and was hit by Yale defensive back Miles Oldacre. The senior quarterback was taken off the field on a stretcher.

Yale came out of the locker room hot and used two big gains to advance into the red zone – first, Zane Dudek took the ball 25 yards on a screen pass, and then quarterback Griffin O'Connor connected with Reed Klubnik for a 48-yarder .

A Harvard three-and-out later, Yale scored again. On first down at his own 46, O'Connor launched the ball deep to top target JP Shohfi, who positioned the Bulldogs at the six yard line. The Crimson put up a fight in the red zone, limiting Yale to a field goal. With that, the Bulldogs snapped the exchange of touchdowns and took its first lead of the game.

On third and eight, it appeared as though the Bulldogs would have to settle for a field goal. However, a hit by Wes Ogsbury was ruled to be targeting and Yale was granted a first down on Harvard's four yard line. O'Connor punched the ball in himself to knot the game at 21.

With under a minute left in the first half, quarterback Tom Stewart dumped the ball off to wide receiver Henry Taylor, who dove and slammed the ball in just across the goal line. The Crimson advanced into the red zone courtesy of a deep ball hauled in by senior wide receiver Brian Dunlap.

Harvard's first possession of the second half began with an impressive completion to Jack Cook. Starting at his own 10, Stewart aired it out to the junior receiver, who jumped to secure the pass and stuck one foot in bounds to advance the Crimson 31 yards. Thereafter, the drive stalled as the Bulldogs' defensive front stuffed some runs and Stewart missed Adam Scott on a pass to his left.

Bolstered by a Jon Sot punt downed at Yale's three yard line, Harvard managed to force Yale's punt unit onto the field as well. Then, sophomore wide receiver Tyler Adams took a handoff and broke off a 62-yard touchdown run – the second-longest of the season for a Crimson ballcarrier – to put Harvard up, 14-7.

After the Bulldogs' first score in the first quarter, the Crimson defense shut down Yale's attack. Its next three drives resulted in a trio of punts and a total of just 37 yards gained. However, its next attempt tied the game up once more. Starting on its own 41, Yale used a 33-yard gain by Dudek – the Bulldogs' top running option who has dealt with injuries all season – to set up its second touchdown. This time, O'Connor tossed a bullet to JP Shohfi for a toe-tap score.

Receiving to start off the game, Harvard's offense began cruising down the field on the strength of runs by Aaron Shampklin and a third-down conversion pass to tight end Jack Stansell. Once the Crimson crossed midfield, Stewart attempted a risky run up the middle on which he fumbled and Yale recovered.

O'Connor took over and attempted to drive the Bulldogs downfield, completing his first pass of the day to Reed Klubnik for a first down. However, running back Aaron Lamar was brought down for a loss of six on the ensuing second down, and Harvard captain Zach Miller swooped in on third down to intercept O'Connor at the Crimson 16. The pick is O'Connor's fifth in his last two games.

Stewart and his offense managed to curtail Yale's second defensive stand, however. Losing two yards on the first two plays of the drive, Harvard then picked up a gain of 38 as Stewart passed from the left hash to the right sideline to a sliding Cook. Six plays later, Stewart was flushed from the pocket but targeted Taylor, who came down with the game's first score.

Yale fought right back on a drive that took 3:17 and spanned 76 yards. Heavily targeting wide receiver Jaydan Sandifer and even taking the ball himself for a first down, O'Connor guided Yale downfield and handed off to Lamar for a three-yard touchdown sprint. Harvard 7, Yale 7.

The Bulldogs maintained momentum after notching their first score. A Harvard drive started with a holding call that knocked the offense back to its own six yard line, and Shampklin was then stuffed twice to lead to a three-and-out. Harvard punted, allowing return man Melvin Rouse II to break several tackles and position Yale on the Harvard 35 heading into the second quarter.