If Jeff Brohm Leaves, It's Because Louisville Has the One Thing Purdue Lacks Bleacher Report

November 18, 2018 Sports, unitedstates Comments Off on If Jeff Brohm Leaves, It's Because Louisville Has the One Thing Purdue Lacks Bleacher Report 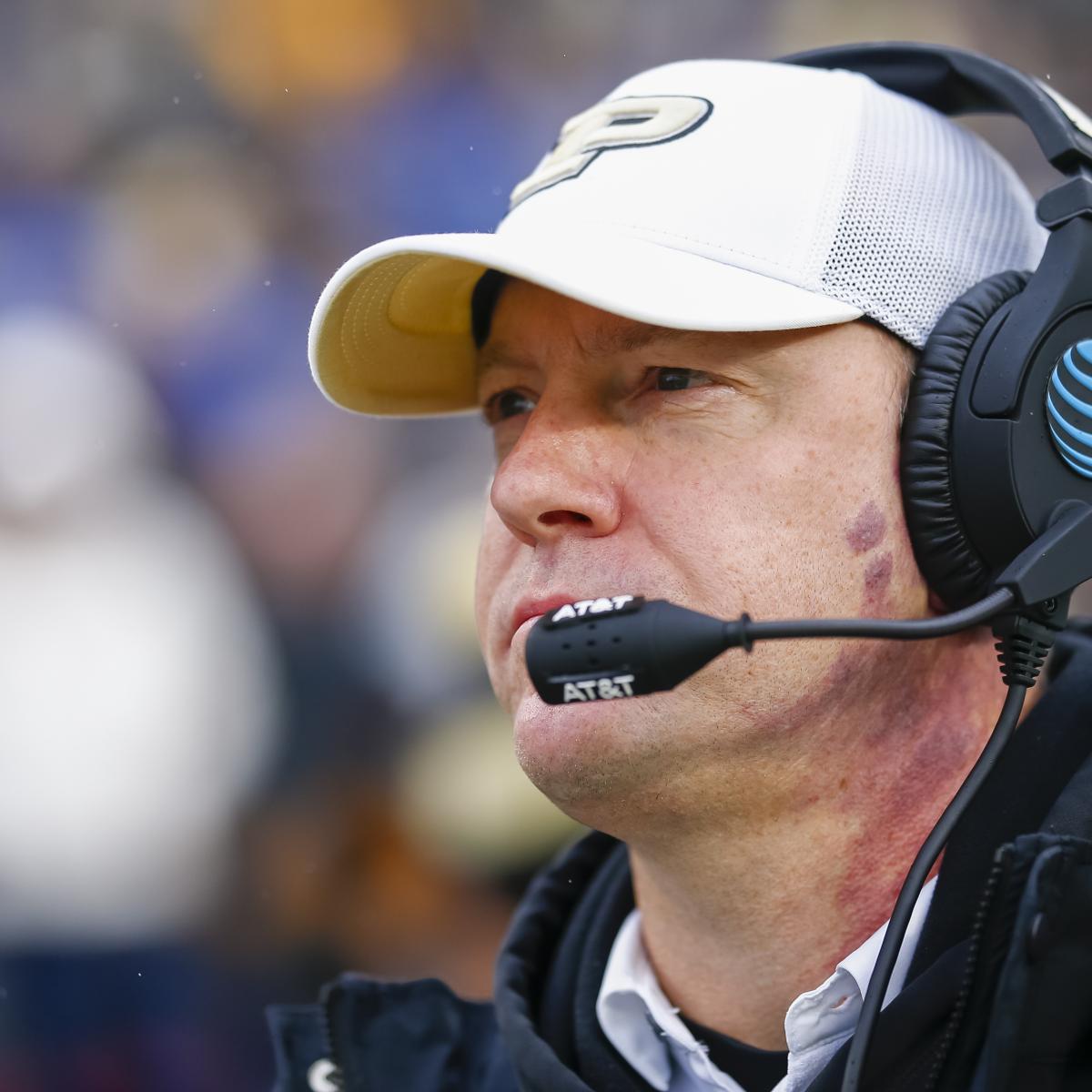 What does it mean to Jeff Brohm?

Saturday, Purdue played its final home game of the 2018 season at Ross-Ade Stadium. The seniors he had no part in recruiting made their last appearance for the Boilermakers in West Lafayette– –a gut-wrenching 47-44 triple-overtime loss to the Wisconsin Badgers.

They were, however, the seniors he energized.

In the stadium he brought back to life.

For a program now on the rise.

If Saturday was the final time Brohm led the Boilers into Ross-Ade, it was not because he needed to see more success.

Brohm required only two years to revive a lifeless program that had mustered nine victories and zero bowl appearances over the four-season span before his arrival. He's already earned 12 wins, and eight of the 12 losses are by one-possession margins.

Behind a creative offensive scheme and an aggressive philosophy, the Boilers have ascended from Big Ten afterthoughts to a competitive team on a weekly basis. If they topple Indiana next week, Purdue will record a fifth conference win for the first time in 12 years.

Thanks to a successful stint at Western Kentucky and Purdue's rise, Brohm's coaching career is on an upward trajectory. He may soon receive the opportunity of a lifetime, since Louisville fired head coach Bobby Petrino last Sunday.

A chance to go home.

His football life revolves around the city. From high school to college to coaching, everything outside of Brohm's NFL experience started in Louisville. His brothers, Greg and Brian, both at Purdue, played and previously worked for Louisville. His father, Oscar, was a quarterback at the school.

Put mildly, there is not a more respected football family in Louisville– –where Brohm still owns a home.

There are times that a candidate and job just converge. If this is not it for Louisville and Jeff Brohm I do not know what is.

Sure, it's not a guarantee he leaves. Brohm, as expected, has continually avoided discussions of his connections. Leading up to Saturday's tilt, he acknowledged he's heard the noise but would not comment on speculation, according to Matt Stevens of Rivals.

"I do not think people realize how good it is here," Brohm said of Purdue in late October, by Mike Carmin of the Journal & Courier.

A true statement, for sure.

Beyond Brohm's on-field progress, the university finished a $ 65 million football performance complex to make the facilities some of the Big Ten's best. Upgrades to Ross-Ade Stadium followed. Brohm recently signed a $ 29 million contract through 2024.

And this roster? Intriguing. Highlighted by star wideout Rondale Moore– –who, incidentally, attended the same high school as Brohm-Purdue has a few promising weapons on offense and a defense loaded with returning players for 2019.

If Saturday was the end, it was not because he lacked support from Purdue.

It's true that Louisville– –the football program specifically, though the athletic department as a whole has dealt with issues– –is a mess. The team was not adequately prepared for the loss of Heisman Trophy-winning quarterback Lamar Jackson. Louisville is not a full rebuild, but it's not a ready-made winner, either.

While no coach should fear competition, Louisville resides in the same ACC Atlantic Division as Clemson and a Florida State program that had reached a bowl in 36 straight years before 2018. The Big Ten is strong, yet most of the powers are in the opposing East Division.

Louisville also has excellent facilities, hefty resources and a steady recruiting history, as it consistently garners classes in the 35-50 range. If Brohm can elevate Purdue from a trend of 50-75 finishes, his potential at Louisville is enticing.

Purdue holds a top-25 class in the 247Sports composite rankings for the first time since 2004. Given the development the Boilers have showed under Brohm, a steady rise in talent should lead to even greater on-field improvement.

If Saturday was the end, it was not because Brohm failed to garner enough trust in his vision and direction.

If the rumors of Jeff Brohm taking the Louisville job are true, I understand it might be about going home but I think it's a mistake by the coach. Purdue's a much better job, despite the state's talent being shared by ND, IU and PU.

Purdue is a stepping-stone job. Perhaps that will change, yet the simple reality is: It's not right now. If Louisville hired Brohm, that would not vault the program to top-tier status. And unless he sees Purdue as the final stop, another year or two in West Lafayette could secure Brohm a high-profile opportunity.

After all, he loves being at Purdue. Fans, players and the administration want him to stay. And at this particular moment, the Boilers are in better position to win.

If Saturday was the end, Purdue gave Brohm every reason to stay– –except one.