In a Walmart Lot, a Rough Refuge for Wildfire Evacuees

November 19, 2018 U.S., unitedstates Comments Off on In a Walmart Lot, a Rough Refuge for Wildfire Evacuees 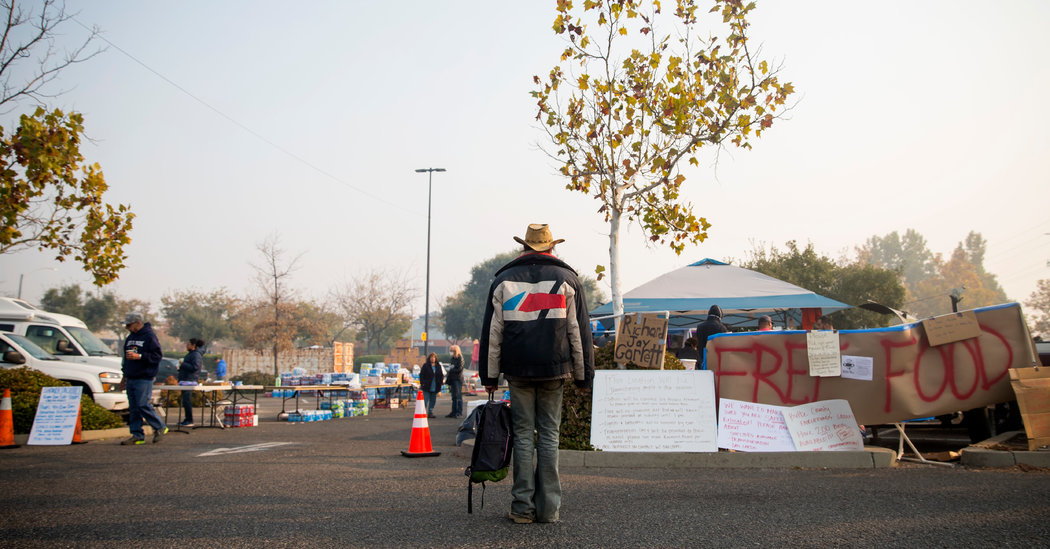 CHICO, Calif. – After Jarrad Winter escaped on foot from the wildfire that destroyed his home in Magalia, Calif., And then caught a hair-raising ride with a neighbor through the flames and out of the hills to safety in Chico, he was at wits' end . Like dozens of other survivors, he found refuge in the field by the local Walmart.

"I never thought I'd live in a tent city," said Mr. Winter, 39, a Marine Corps veteran and software developer who had recently emerged from a stretch of homelessness, only to lose everything he owned in the devastating Camp Fire, the deadliest California wildfire on record. "I mean, this is America; we're not supposed to live this way. But here we are, man, the new normal. "

Firefighters are still battling the colossal blazes in California that have already claimed 80 lives, 77 of them in Butte County north of Sacramento, where the Camp Fire has raged. Nearly 1,300 people remain missing and unaccounted for.

As of Sunday evening, the Camp Fire, which has already burned nearly 150,000 acres, was about 65 percent contained, according to the California Department of Forestry and Fire Protection.

While the struggle to contain the fires continues, many evacuees are collecting in makeshift settlements outside the scorch zones, and wondering how they will pick up the pieces to extricate themselves from this tragedy.

Some who fled from Magalia, Paradise and other burned towns in the forested Sierra Nevada foothills of eastern Butte County are staying in the tent city at the Chico Walmart. Others sleep in their cars over at the Target parking lot. Then there are those who are relying on the kindness of strangers, or going from one shelter to the next.

Officials made it clear on Sunday that they did not want the Walmart tent camp to become a permanent fixture in Chico. While emphasizing that no one in the camp would be forced to leave, they said in a statement that they were assisting people who wanted to leave by relocating them to a site at the county fairgrounds. There are six American Red Cross shelters for fire evacuees, county officials said.

California is the richest state in the country, home to technology giants like Google and Facebook and the multimillionaires who lost luxury homes around Malibu to wildfires this month. But the blazes are also laying bare the economic inequality that distinguishes the state, as shallow-pocketed survivors grasp for the kinds of ad hoc strategies commonly seen after disasters in the developing world.

"We were always a paycheck-to-paycheck kind of town," said Anjeanette Ramey, 30, who had worked in customer service in Magalia but was unemployed when the fire hit.

"All I made it out with were the clothes on my back," she said on Sunday morning, gazing at the Walmart tent city, where she has stayed for several days. "My house, my car, gone. No money, no job. I have no idea what happens next. "

Her boyfriend's reaction was more about suspicion and anger. He declined to give his name, saying he did not want to be known as a victim, and said the couple was avoiding formal shelters because he thought they were unsafe for people like him and his neighbors, who he thought counted for little with the rich and powerful.

With reliable information in short supply, dark rumors and speculation spreads easily in the tent city and other places where evacuees are camping.

People in the tents said there had been talk a few days ago that the authorities were planning to clear them out. But guards with the private security firm that patrols the Walmart property said there were no plans to evict the evacuees.

Clad in bulletproof vests, they pointed to the portable toilets that had been set up in the parking lot, and the donated food and clothing that had been made available to those in the tents.

The Walmart lot, which had emerged as an unofficial distribution site for aid, also features a whiteboard with names of people who are missing from the fires, and a list of shelters that have available beds.

Some of the tent people say they have not gone to shelters because they find security in numbers at the Walmart; others say they like being near friends and neighbors who also lost their houses.

"This is my home now," said James Reed, 65, a retired tow-truck driver, pointing to his 1968 Chevrolet El Camino. His house in Magalia, bought two years ago, was destroyed, he said, and "being here, in this parking lot, I'm reminded I'm not the only one."

Mr. Reed, wearing an AC / DC baseball cap, said he was still trying to make sense of what had happened. He said he was getting used to sleeping in his car, enduring temperatures that have been dipping down close to freezing at night.

"Right now, I'm like a snake on a rock, warming up a little bit," Mr. Reed said around midday. "Getting out of that fire was like a B-rated horror movie. I never thought I'd see something like this in this country. "

The camp at the Walmart has become a place for fire evacuees to connect and share information with another group they suddenly have a lot in common with. People who were already living on Chico's streets before the blazes began have flocked to the parking lot, not least to partake in some of the free food.

Robert Talk, 61, a former amusement park worker, said he enjoyed telling jokes and sharing gossip with the evacuees. He said that his small dog, Princeton Peabody, interacts effortlessly with strangers, making it easy to start conversations with people in the camp.

"We're kind of all in the same boat now, are not we?" Mr. Talk remarked. "It's good for normal folk to realize we're just like them. A lot of us are in this situation through no fault of our own. Maybe this'll open eyes, so we can start helping each other more. "

One new resident of the tent camp, Kelly Clark, said that she appreciated meeting Mr. Talk and his dog and talking about how the fires were still raging around them. With a smile, she pointed to her tent and said: "Look at my new condo. Luxurious, is not it? "

Ms. Clark, 39, said that money was now a problem after the house where she lived with her boyfriend was destroyed. She said she was unemployed, and wondered how much longer they could sleep rough outside the Walmart. She, too, was wary about going to one of the shelters, saying she had heard talk that viruses were spreading there.

"I just feel freer out here, like I'm not locked up inside with a bunch of other people crying about what they lost," Ms. Clark said. "When it starts raining, maybe then we'll make a move. But until then, we're staying put. "

There is rain in the forecast for Wednesday.