Home / indonesia / Ahmad Dhani is not a citizen of NU!

Ahmad Dhani is not a citizen of NU! 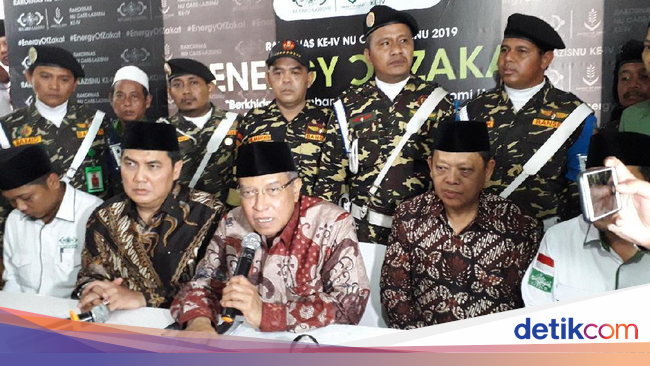 Yogyakarta – –
Chairman of Nahdlatul Ulama Board (PBNU) KH Said Aqil Siradj said that Ahmad Dhani was no longer a family of NU. According to Said, Ahmad Dhani has been worried about NU.

"NU has been worried, not residents NU," he said to reporters within the 4th National NU Care-Lazisnu Meeting at the Islamic School Diponegoro in Sleman, Yogyakarta (DIY) Friday (2/15/2019).

He said that Dhani had been troubling NU after joining NU and PSIP with Nasakom (national, religious, communist).

"Set up the nasakom, NU and PDIP questions," he explained.
It was also said when Dhani was defended by Gus Dur and PBNU. That was in 2005 when FPI opposed Dhani and Dewa's band because the table was covered & # 39; Laskar Ribbon was regarded as a circular picture and was stated to have been Chopped on a red ribbon with a Allah writing ring at the Dewa on Trans TV 's dependent concert.

"In the meantime, FPI was opposed to the fact that it was said to have been a prestigious inscription, protected by Gus Dur, and then Mr Hasyim Muzadi was at that time. Dhani came to the PB (NU Management Board) and went to the PBNU arts and cultural committee ".

After continuing to prosecute the case & # 39; idiot at the Surabaya District Court on Thursday (2/14/2019), Ahmad Dhani got a white turban from Gus Aam Wachid Wahab. Not only did a turban, the man who said that the grandson of NU's founders also described a brief account of the person of Mulan Jameela.