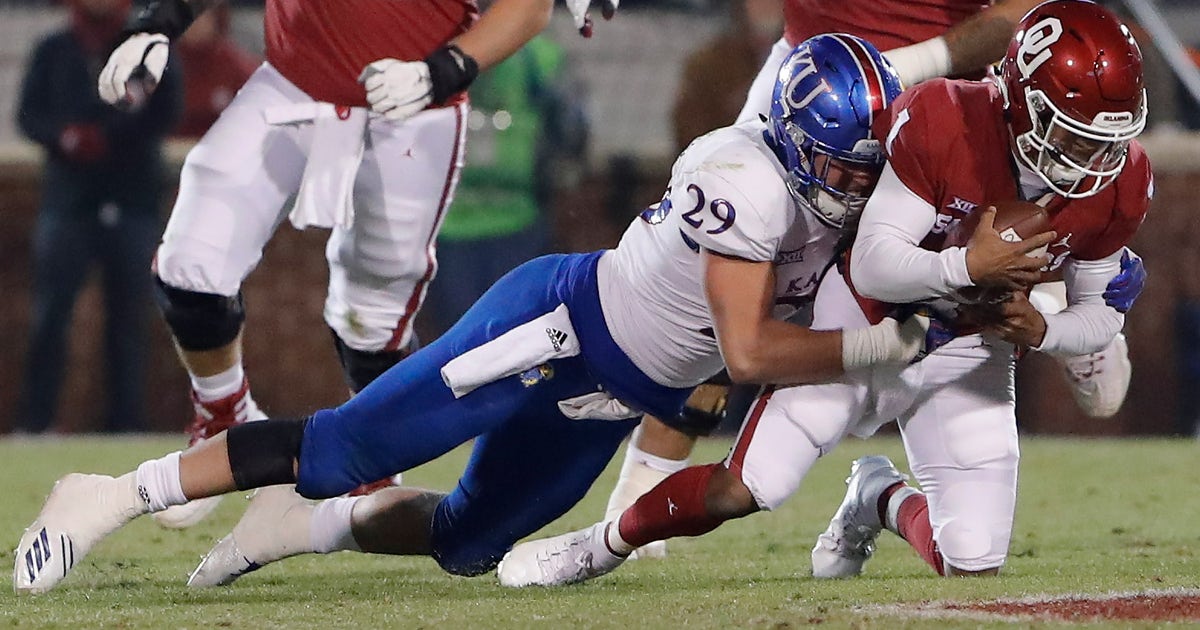 The sixth-ranked Sooners used every bit of offense from Murray to overshadow a huge game from Kansas freshman running back Pooka Williams Jr. in Oklahoma's 55-40 victory Saturday night.

Murray accounted for two of his five touchdowns in the fourth quarter.

"He's a special player," Kansas coach David Beaty said. "That Heisman needs to go to him."

Oklahoma (10-1, 7-1 Big 12, No. 6 CFP) moved closer to a spot in the conference championship game in Murray's likely final home game. The Sooners earn a trip to the Big 12 title game for the second straight year by beating West Virginia on the road on Black Friday or if Kansas beats Texas.

That came just days after Oklahoma began a campaign for the baseball first-round draft pick centered around a classic image of Bo Jackson in shoulder pads while holding a baseball bat.

"I do not know whose idea it was, but I felt good about it," Murray said. "It was fun. It was a once-in-a-lifetime deal. "

But Murray was nearly outperformed by Williams.

Williams rushed for a career-high 252 yards and two touchdowns and threw for a score for Kansas (3-8, 1-7). The Jayhawks have lost seven of the past eight games.

Murray sealed the game with a breakaway 75-yard touchdown run with 13:44 remaining, sparking a 20-point fourth quarter. He added another touchdown in the quarter and finished with 272 yards passing and two touchdowns. He rushed for 99 yards and three touchdowns.

It was the second time Murray had appeared to establish control for the Sooners.

Oklahoma led 21-17 early in the third quarter when Murray broke free for an 11-yard touchdown run. Backup running back Kennedy Brooks, filling in for injured Trey Sermon, followed with a 13-yard score to cap a night he rushed for 171 yards and two touchdowns.

But Oklahoma's defense continued to struggle. The Sooners allowed 524 total offensive yards, and Kansas found a way to remain in the game.

"Defensively, we did not tackle at all, really the whole night," Oklahoma coach Lincoln Riley said. "That's the whole story."

Oklahoma took a 48-24 lead with 12:05 remaining when Kyle Thompson blocked a punt and Curtis Bolton scooped and scored and appeared to be in control.

But Williams answered with a 42-yard touchdown run and Kansas converted the two-point conversion.

"I still feel like we can be what we need to be," Riley said. "Obviously, we did not take the step this week that we needed to take. We felt like we had defended the run well all year. We put a lot of emphasis on our pass coverage, which we thought was better.

"We sprung some new leaks."

Oklahoma still has Murray. At the moment, that's enough.

Even with struggles, Riley still believes the Sooners can perform when it counts on defense.

But they still allowed 40 points to a Kansas team that had combined for just 39 points in the previous five meetings combined between the two teams.

"This is not the NFL," Riley said. "We're not going to sign some guys off waivers.

"These moments, especially this one we're getting ready to go into, we can not sit here and feel sorry for ourselves."

Kansas: With David Beaty nearing his final week as coach, the Jayhawks have something to build from offensively. Outside of Williams' night, Peyton Bender completed 16 of 23 passes for 145 yards and the Jayhawks rushed for 348 yards.

Oklahoma: The Sooners' embattled defense did itself no favors. It entered the game allowing 416 yards per game, a total Kansas eclipsed in the fourth quarter.

Kansas: The Jayhawks host No. 13 Texas next week in their season finale.

Oklahoma: The Sooners have never lost to West Virginia since the Mountaineers joined the Big 12 in 2012.