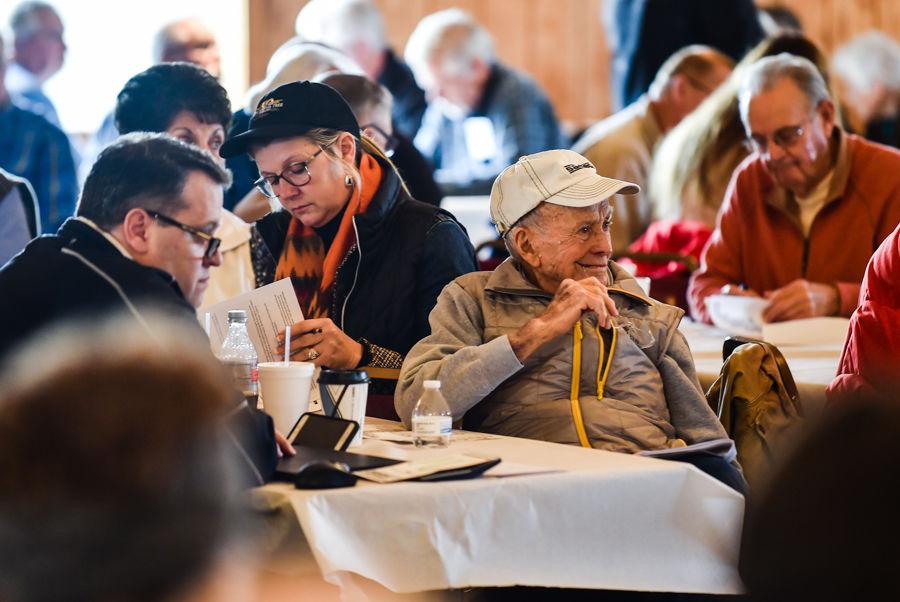 STARLIGHT-Joe Huber's Family Farm & Restaurant will remain in business and stay with the Huber family after most of the 156-acre property was sold for $ 2,731,300 at Saturday's auction.

Huber family members bought the 31.17-acre lot with the restaurant, catering barns and lakes and a neighboring 6.65-acre lot for $ 880,000. Businessman Sam Shine bid $ 1,320,000 to purchase the majority of the farmland, and two other bidders bought smaller parcels of farmland.

The live auction was conducted at Joe Huber's by the Harritt Group.

Joe and Bonnie Huber opened their you-pick production operation in 1967 and opened Joe Huber's Restaurant in 1983. Joe Huber's fried chicken, biscuits and other country-style fare have become a staple in Southern Indiana. Four of the founder's children decided earlier this year to retire, and the auction was announced in September.

The sale of a .87 acre-property with a three-bedroom house was tabled at the auction, making it the only lot that did not sell.

Jenna Huber Clem, the daughter of Joe Huber III, was one of the restaurant's bidders, and she will run the business with her aunt and uncle. Before the auction, Shine and Clem had offered to purchase the entire farm for $ 2.5 million, but they were declined. Shine, who is the founder and former CEO of Samtec in New Albany, declined to comment for this story.

Clem said she felt her father was guiding her throughout the past few months and the auction. Joe Huber III, who worked for years at the family farm and restaurant before dying in an accident three years ago. Her father "poured his blood, sweat and tears" into this place, she said, so she wanted to fight to preserve her family legacy.

Clem wore a shirt printed with the words "Dream Big" at the auction. That's been her motto throughout the whole process, she said. Now, she says she has accomplished her dream of saving her family farm.

Clayton Truesdell, owner of Truesdell Custom Builders, was one of the top bidders for the restaurant lot, going up to $ 610,000. However, he said he decided to back out when the bidding was just between him and the Hubers so that the business could stay with the family.

"I have no interest in being the man who keeps them from saving their own farm," he said. "There's a legacy here, and it is a family legacy."

Clem said she is grateful for the support she's received throughout the past few months. After the auction was announced, she raised almost $ 17,000 for the auction on a GoFundMe page. She said she wants members of the community to continue their own traditions at Joe Huber's.

She said she is thankful that Shine bought a large portion of the farmland. She plans to collaborate with the businessman, who plans to preserve the land, she said.

"Nobody's going to build a Walmart up here, thank goodness," she said. "He's an amazing man who is very generous. I do not have the words to give him enough thanks for wanting to help us."

Clem's main goal for the past months has been to save and secure the farm and restaurant. Now, she said she plans to figure out what the next steps are as the business continues its tradition.

"It will still be Huber's," she said.