November 18, 2018 Science, unitedstates Comments Off on Look up! Leonid meteor shower visible this weekend over Georgia 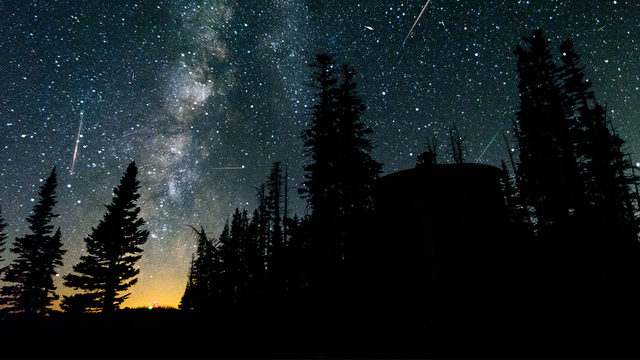 With the clear skies in Georgia, there's a good chance you may be able to catch a meteor early Saturday and Sunday nights. On Sunday, the peak time is around 2:23 a.m.

According to the American Meteor Society, spectators can expect 10 to 15 meteors per hour during this year's peak times: the early morning hours of Saturday and Sunday.

"Earth will pass through the thickest part of the Leonid swarm at 7 p.m. EST (2300 GMT) on Nov. 17, "according to experts at Space.com. "But the best time to look will be during the after-midnight hours of Sunday morning, once the source the meteors appear to stream from, called the radiant, comes above the horizon for observers in North America."

Dawn is the best time to view the Leonids because viewers will be able to avoid the glare from a waxing gibbous moon, which sets before 2 a.m. local time, experts added. And under ideal dark-sky conditions, the meteors "ram into our upper atmosphere at 45 miles (72 kilometers) per second – faster than any other meteor shower."

The comet "makes fairly frequent passes through the inner solar system," according to David Samuhel, senior meteorologist and astronomy blogger at AccuWeather. "This lays out fresh debris in the path of the Earth's orbit every 33 years."

When it does make a close approach to the planet, stargazers get to revel in explosive showers. In 1833, stargazers reported as many as 72,000 shooting stars per hour, according to National Geographic. Later, in 1966, a group of hunters reported seeing 40 to 50 streaks per second over the duration of 15 minutes.

Scientists currently predict the next major outburst will not take place until 2099. But, The Atlanta Journal-Constitution reported last year, the comet will be returning closer to Earth in 2031 and 2064, meaning more intense storms are on the horizon. Smaller showers, like the one occurring this weekend, happen annually.

While the 2018 shower will not bring hundreds of shooting stars per hour, it's sure to be a delight in areas with clear skies and the absence of moonlight.

In Atlanta, the best sky conditions will occur Sunday morning around 2:23 a.m.

More to know about meteor showers and where to watch them:

What's the difference between a meteoroid, meteor and, meteorite anyway?

Bill Cooke, head of NASA's Meteoroid Environment Office, told Space.com that a meteoroid is essentially space waste. For example, the "crumbs" left behind from Halley's Comet trail are meteoroids.

These "crumbs" can also be left behind by asteroids, such as the 3200 Phaethon.

Once the meteoroids enter Earth's atmosphere, they become meteors (or shooting stars).

Though most meteors disintegrate before hitting the ground, meteors that do strike the surface of the planet are called meteorites, Cooke said.

How to watch the meteor shower

Clear skies are essential for prime meteor shower viewing. Skyglow, the light pollution caused by localized street lights, will block out the stars and negatively affect your viewing experience, so head somewhere far from city lights.

Or you can head to Stephen C. Foster State Park, one of Georgia's most remote state parks located in the Okefenokee Swamp, which was named one of the best spots in the world for star gazing.

When you're outside in the dark, lie flat on your back with your feet facing south and look up at the vast sky. Give yourself 30 minutes for your eyes to adapt to the environment.

Be sure to bring warm clothing, a sleeping bag, blanket or lawn chair and leave your telescope at home.

Learn more about the Leonids at space.com.