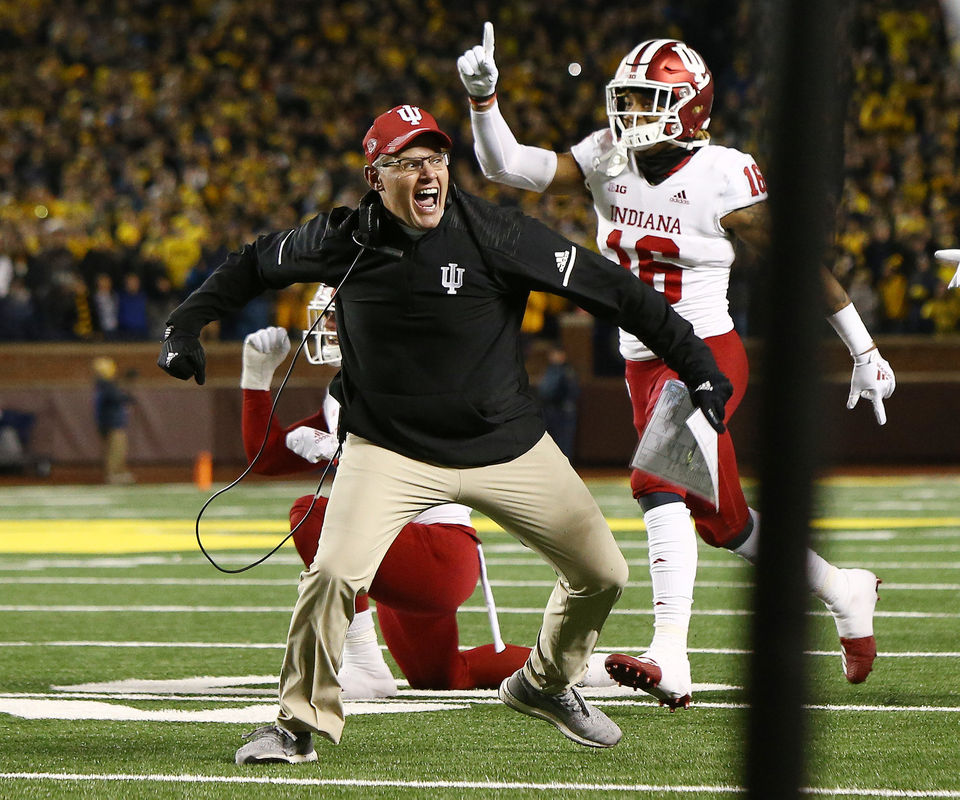 ANN ARBOR – The Michigan football team found itself in unfamiliar territory on Saturday, trailing at halftime for the first time since the end of September.

Indiana took a 17-15 lead with 1:33 to go in the second quarter, using a nine-play, 75-yard drive to score the go-ahead touchdown and reclaim the lead.

But the fourth-ranked Wolverines appeared like they were ready to respond, marching 54 yards in 1:09 to reach the Indiana 7-yard line.

Fullback Ben Mason rushed up the middle for a gain of four yards, to the Indiana 3. A second play had already been diagramed up during the timeout, Harbaugh said, a pass to tight end Sean McKeon on the goal line, near the pylon.

If McKeon could not get in the end zone, he was instructed to get out of bounds. He caught the pass and was tackled in bounds at the 2, with time ticking off.

"Their player made a great play on it," Harbaugh said. "Made a great tackle on the field of play. The clock was moving, so we called to clock the ball – kill it – and there seemed to be some problems getting the ball back in."

As the umpire tried to spot the ball, review shows an Indiana defender kicking the ball out of his grasp. Harbaugh said he asked for an explanation from the officials and was told that they had determined the kick was not intentional.

"We were either going to kick it or try and get a touchdown," said quarterback Shea Patterson, who completed 16 of his 28 passes for 250 yards and a touchdown. "If we got the first down [note: they did], we were going to try and clock it and get the field goal.

"I do not know what happened with the ball – I saw the ref scrambling with the ball. They might have kicked it. It was just unfortunate."

Michigan (10-1, 8-0 Big Ten) came away scoreless on the drive, an accurate rendering of the team's night in the red zone. Six of its eight trips inside the Indiana 25 resulted in field goals, all successfully converted by freshman Jake Moody. The Wolverines scored just one touchdown.

But a 16-3 second half proved to be the difference, led by a 10-point third quarter that helped flip the lead for good. Michigan never trailed after that, finishing the game with 504 yards of total offense and an almost 12-minute time-of-possession advantage.

"They did a great job," running back Karan Higdon said of Michigan's red-zone struggles. "We did not execute as well as we wanted to a couple times. We had some dropped balls, miscues and we can not have that. But I'd rather that happen now than next week."