November 18, 2018 U.S., unitedstates Comments Off on Ocasio-Cortez Endorses Effort To Primary Members Of Her Own Party In 2020

"Long story short, I need you to run for office," Ocasio-Cortez told the group Justice Democrats in a Saturday video conference, according to Politico. The group has launched a campaign called #OurTime.

Join our call today with @ Ocasio2018 to hear our plans for 2020 and how to get involved in the #OurTime project to support more diverse working class leadership in our country.

"All Americans know money in politics is a huge problem, but unfortunately the way that we fix it is by demanding that our incumbents give it up or by running fierce campaigns ourselves," said the congresswoman-elect from New York, who herself ousted long -term Democratic Rep. Joe Crowley during the primaries to win her seat.

"We need new leaders, period. We gotta primary folks, "Ocasio-Cortez's chief of staff, Saikat Chakrabarti said on the call. Chakrabarti is a co-founder of Justice Democrats, Politico reported. (RELATED: Report Seems To Undermine Ocasio-Cortez Claim To Not Be Able To Afford D.C. Apartment)

The group said they want Democratic members of Congress to be representative of their diverse communities and support liberal policies like Medicare for all, abolishing the Immigration and Customs Enforcement department, implementing a "Green New Deal," and rejecting corporate PAC donations. On the campaign trail, Ocasio-Cortez talked about forming a "corporate-free caucus" as a means to push for reform. That type of group, if it forms, could turn out to be the left's counterpart to the Freedom Caucus, which pushed Republican leadership to the right.

The group has invited members to nominate candidates and districts to target in the next election cycle, prioritizing women and diversity. 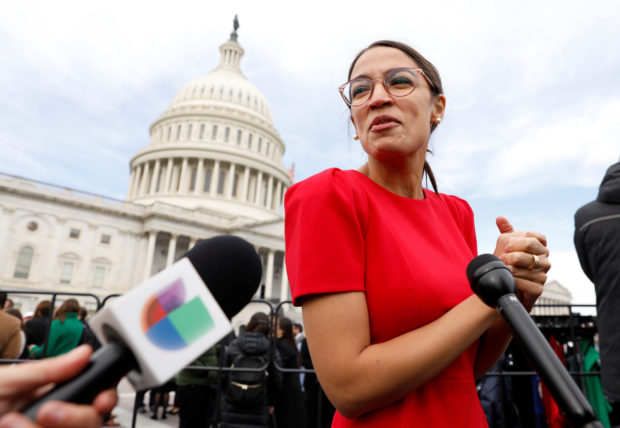 Democratic Representative-elect Alexandria Ocasio-Cortez of New York talks with reporters as she arrives for a class photo with incoming newly-elected members of the U.S. House of Representatives on Capitol Hill in Washington, U.S., November 14, 2018. REUTERS / Kevin Lamarque – RC1A56B44860

Ocasio-Cortez retweeted the group's tweet on Saturday along with an admonition for "strong progressive" leaders to join her in Congress.

If you're a strong progressive leader in your community and committed to getting money out of politics, I want you to join me in Congress. I want you to run.

To run in 2020 without corporate money, you need to start considering now. Join @justicedems tonight to learn more ⬇️ https://t.co/7hkAFkaZ4A

The group would like to repeat the Ocasio-Cortez "playbook" in other districts.

"We recruited and supported Ocasio-Cortez all the way to a historic victory and now we're going to repeat the playbook," Justice Democrats Executive Director Alexandra Rojas told Politico in a statement.

"There's lots of blue districts in this country where communities want to support a new generation of diverse working class leaders who fight tirelessly for their voters and build a movement around big solutions to our country's biggest problems," Rojas continued.