Palace insiders reveal how Hurricane Meghan is shaking up the Royals

November 18, 2018 Entertainment, unitedstates Comments Off on Palace insiders reveal how Hurricane Meghan is shaking up the Royals 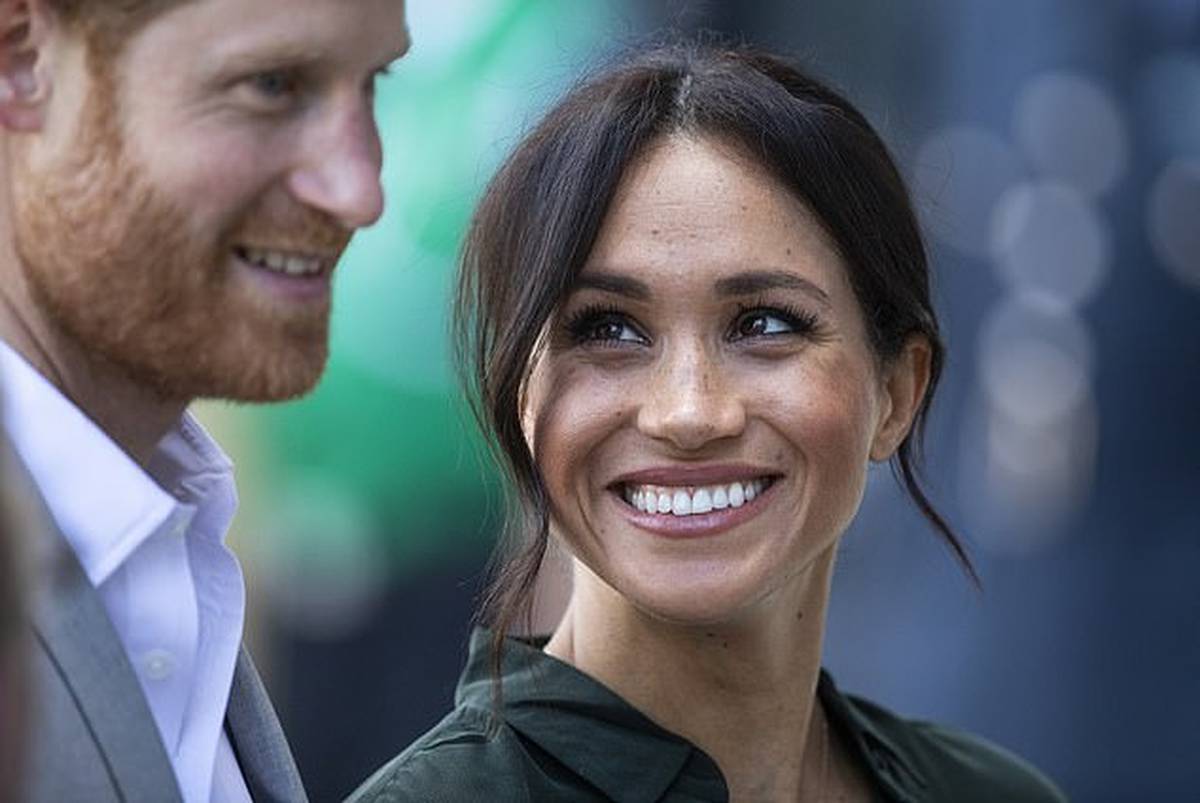 If 24 hours is a long time in politics, the past six months must have felt like a lifetime for the Monarchy.

Six months ago, the House of Windsor officially welcomed a new member into the fold when Meghan Markle walked down the aisle of St George's Chapel to become Prince Harry's wife, reports Daily Mail.

In doing so, she made history, becoming the first woman of African-American descent to marry into the heart of the Royal Family, and a divorcee, to boot.

Yet the seismic change she brought about has by no means stopped with the exchange of vows.

As The Mail on Sunday reveals today, the new Duchess of Sussex has beented no time in putting her stamp on The Firm. Determined to do things her way from the moment she bounces out of bed at 5am, she has proved to be less of a breath of fresh air and more of a whirlwind.

In fact, "Hurricane Meghan" is ripping up the rulebooks on everything from fashion to friendships, diplomacy to the etiquette of car doors (the Duchess shuts her own). Here, we explore a few of the changes she has brought to the House of Windsor …

The Queen is said to have expressed surprise that Meghan, a divorcee, wore quite such a white dress for her wedding – an elegant boat-necked creation from fashion house Givenchy. But then the future Duchess of Sussex was always going to do it (or more pertinently wear it) her own way.

It's a boldness that has led to unease among some courtiers.

"Meghan is being told she needs to start dressing less like a Hollywood star and more like a Royal," a source from one of the fashion teams which has visited Kensington Palace told The Mail on Sunday.

It seems unlikely to happen: from the moment she first stepped out in public with her future husband, Meghan has unstuffily defied Royal convention, whether with her penchant for non-British designers or her fondness for wearing black – traditionally worn by Royals only to signify mourning.

No-one gave that memo to Meghan, who in August not only wore a black tuxedo to a special performance of the musical Hamilton, but caused a further frisson by displaying bare legs a good few inches above the knee.

It is said this rebellious spirit has resulted in raised eyebrows from the Queen, who is a stickler for the rules.

While she and Meghan are understood to have a warm relationship, a degree of tension was reported between the pair during their trip to Runcorn, Cheshire, in June. Meghan declined to wear a hat after apparently failing to understand that when the Queen's aides informed her the Queen would be wearing one, that meant Meghan should follow suit.

SHAKING UP THE PALACE FLUNKIES

Six or seven a day – that's the number of texts the new Duchess of Sussex sends to palace aides with ideas and requests.

She's an early riser, up at 5am rain or shine, and it is said palace staff have never experienced anything remotely like Meghan's formidable work ethic, matched only by the incessant stream of ideas about how to shape her role. Quite aside from her publicized engagements, Meghan has been conducting a series of "undercover" missions to meet the British people, particularly those associated with good causes.

Well-meaning as she is, her particular brand of "up and at" em "West Coast energy is an uncomfortable fit with the more formal ethos of some palace staff.

Meghan has joined the Royal Family at a time when several aides have moved on, including senior communications secretary Katrina McKeever – a point of liaison for Meghan's family – who quietly left the Kensington Palace press office in September. In April, it was announced that Edward Lane Fox, Harry's right-hand man of the past five years, would be leaving earlier than many expected.

And in the past few days, it was reported that one of Meghan's aides, a woman said to be called "Melissa", has departed.

Some who remain, meanwhile, conduct themselves in ways that might seem unorthodox: Meghan's private assistant secretary was filmed appearing to shove a photographer away from her boss on the recent Australia tour.

A NEW LONDON HOME FOR THE PARENTS-TO-BE?

William and Harry, the Dukes of Cambridge and Sussex, are considering a "formal division" of their joint royal household at Kensington Palace, according to recent reports. The split would create separate courts to reflect their increasingly different responsibilities.

Meanwhile, there's speculation over where Harry and Meghan – with a baby on the way in the spring – will make their London home. Up until now, it's been widely expected the Sussexes would move from their current two-bedroom Nottingham Cottage into Kensington Palace's lavish 21-room Apartment 1 – right next door to William and Kate's huge home.

But now there's a spanner in the works – the incumbents, the Duke of Gloucester and his wife Birgitte, are said to want to stay put – and there's talk of Harry and Meghan moving further afield to St James's Palace. Meanwhile, there is talk there have been tensions between the two couples behind the scenes – and in particular between Meghan and Kate. Malicious gossip Very possibly. What female friendship is without its sharp edges?

Meghan can be assured of one close and important ally: Prince Charles has bonded with his new daughter-in-law – as a result of their shared experience of growing up in a dysfunctional family.

Royal biographer Angela Levin spent a year following the prince ahead of his 70th birthday. And, as she revealed in The Mail on Sunday, an immaculate source close to the prince has told her: "There have been so many traumas and crises within the personal life of the Royal Family, from the Duke of Windsor onwards. And many royal divorces

"That's why the Duchess's troubled family background has endeared her to Charles even more."

MEET ALL OF MY HOLLYWOOD FRIENDS

"We have known each other a long time, but we really are relying on each other a lot recently." These were the words uttered recently by tennis champion Serena Williams about her close relationship with Meghan.

It's a clear indication that the new Duchess is determined to sprinkle star dust on The Firm. Under her direction, the old money and even older lineage that traditionally formed part of the Royal Family's inner circle has been joined by sports stars and A-listers.

One look at the Royal Wedding guest list made it abundantly clear just how much Meghan was transforming the landscape: Serena was just one of a number of entertainment figures to make their way into St George's Chapel.

Others included Idris Elba, James Corden, American chat show queen Oprah Winfrey – who spent an afternoon doing yoga with Meghan's mother Doria in the run-up to the wedding – and George and Amal Clooney.

The Clooneys are said to be so close to the new royal couple that they played host to Meghan and Harry at their opulent Lake Como villa in August.

It's no surprise, given her resolute sense of self, that Meghan continues to lean on a non-official team of advisers, comprising a group of devoted close friends who have helped – and continue to help – with every aspect of her transition to royal life , from planning her wedding to organizing her wardrobe for her first royal tour.

Lindsay Roth, one of Meghan's oldest friends since the pair met in a literature class at Northwestern University in Illinois, is one of her closest allies and has recently been seen in the Kensington area. Author Lindsay, 36, based a character in her 2015 novel, What Pretty Girls Are Made Of, on Meghan.

Then, of course, there is Jessica Mulroney, her best friend.

A well-connected stylist based in Canada, Jessica has been especially close to Meghan since the pair met on the set of Suits some years ago.

She is believed to have offered important assistance to Meghan in the run-up to her wedding, even though Meghan and Harry had two leading events organisers and catering firms helping them.

It was Jessica she called to discuss every element of the day, from the dress to the flowers and the photography.

Fast forward a few months and it was once again Jessica who helped the Duchess pick outfits for the tour of Australia.

Meghan's mother Doria, meanwhile, is playing an ever more strategic role. She made two significant visits to see her daughter over the summer, staying at the Sussexes' rented home in the Cotswolds, and is said to be considering moving to Britain full-time when her grandchild is born.

AND THE COSY COUNTRY RETREAT

The new Duke and Duchess of Sussex's choice of country home says much about the couple's new alliances.

While the Queen is thought to have gifted the couple the private and secluded York Cottage on the Sandringham Estate in Norfolk, the couple have also signed a two-year lease on a property on a 400-acre estate in the Cotswolds, close to celebrity mecca Soho Farmhouse, where they have been pictured more than once.

Meghan was spotted there on visits to Britain before she made her permanent move.