PM was welcomed by Slogans, Black Flags challengers Citizenship Bill in Assam with Modi Go Back & # 39;

February 8, 2019 india Comments Off on PM was welcomed by Slogans, Black Flags challengers Citizenship Bill in Assam with Modi Go Back & # 39; 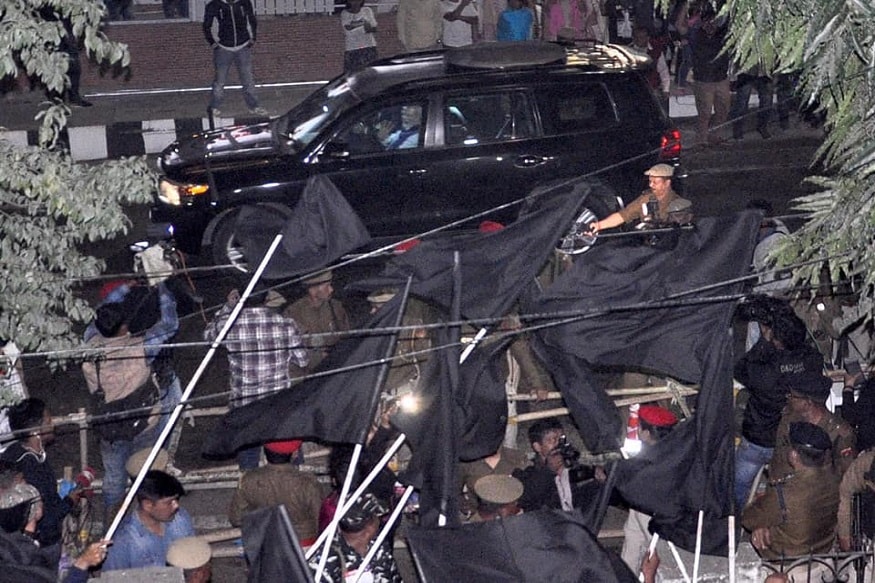 Guwahati: Members of the Unions of Assam Student Members (AASU) listened to a clash against his & her; Citizenship Distribution (Amendment) Bill and made black banners on Prime Minister Narendra Modi who came here Friday afternoon on a two-day trip to the North East.

The prime minister saw the interviews when he moved to Raj Bhavan here, where he spent the night from Lokopriya Gopinath Bordoloi Airport.

A large number of AASU members generated a black flag to the prime and a & # 39; shouted out a demoration when his convention went beyond Gauhati University gates at 6.30pm and a few minutes later when he passed over the AASU headquarters site on M G. Road
<! – –

Slogans are being heard as & # 39; Modi returns, & # 39; Citizenship Citizenship Bill, & Jo. Aai Asom (Glòir to Mother Assam) & # 39 ;.
Images shared on social media show that the PM also has a " bringing out the side of the campaigners.

A large group of BJP supporters and ministerial ministers Bhattacharya (Education) and Pijush Hazarika (Health) can be seen standing near AASU campaigners, ports surrender and their services. shouted by people who welcomed him, so they could have the PM's wave.

Demonstrators were restricted as the gates to the AASU office were locked by police, senior consultant Sammyujal Bhattacharya, student union.

"The government with its tools can show its power and strength … It is not clear what government is trying to stop the campaigns, the inconvenience of the against the Citizenship Amendment Bill. The government has confirmed that it is a defender of Bangladeshi immigrants and is opposed to the native of Assam, "he said.

"The pain of indigenous people will be seen over Assam tomorrow … The efforts of his president will be burned in all parts of the state," said president AASU Dipanka Nath.

The Krishak Mukti Sangram Samiti (KMSS) farmers' organization also showed a black flag to his / her; prime minister in the Adabari and Fancy Bazar areas in the town that fell on his way.

"Modi has come in for a vote from Assam people. The bill has been introduced to give citizenship to Hindu Bengalis from Banglaidia and get their votes in Lok Sabha 2019 polls, "he said.

"We want the prime minister to announce tomorrow that the money given by BJP Mukul Roy (West Bengal) and Himanta Boswa Sarma in the Saradha ponzi scam will be returned to the people," he said.

This is Modi's third mission to Assam from December 25, 2018 when he started the Bogibeel bridge. In his second tour on January 4 this year, the prime minister had told a rally in Silchar that a Citizenship Bill would be donated by the Parliament soon enough, promoting wide-ranging campaigns in the state.