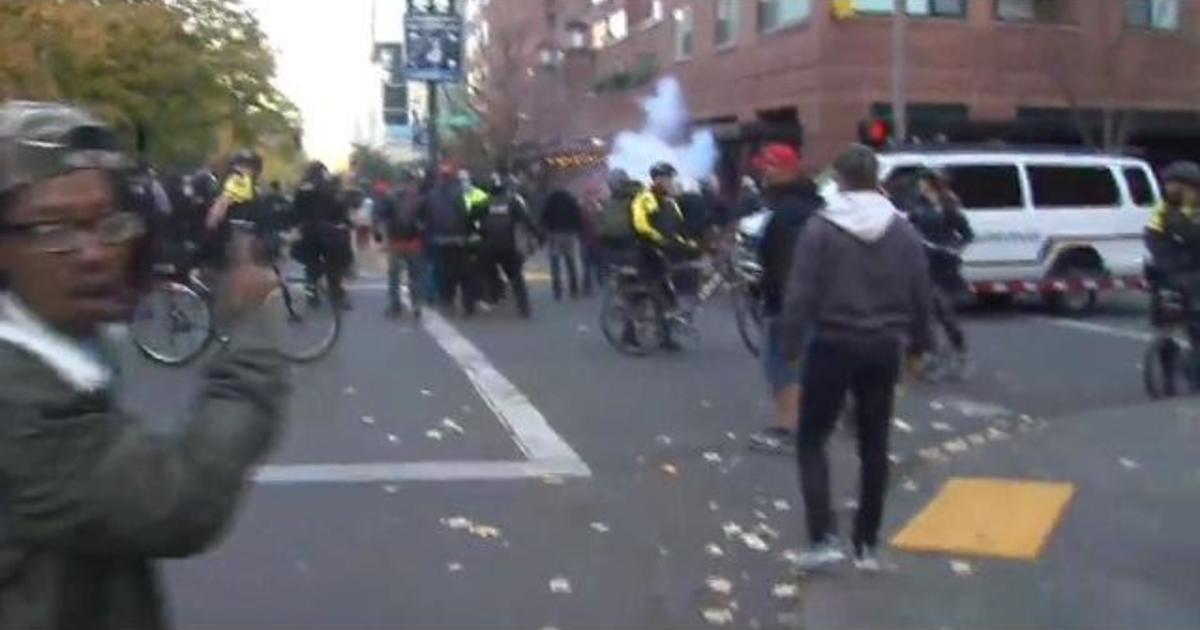 A small protest called #HimToo organized by the far-right group Patriot Prayer was met by hundreds of counter-protesters in Portland on Saturday, CBS Portland affiliate KOIN reports. The protests were meant to be peaceful, but clashes began as the groups started to disperse.

Police also reported glass bottles being thrown. Tear gas and explosives went off as the crowd marched through the streets chanting "Nazis, go home!" Police in riot gear arrived in various locations to keep the demonstrators on the sidewalks, KOIN reports.

The Democratic Socialists of America on Portland held the first rally, which started around 11:30 a.m. Portland DSA tweeted they stand "with survivors and against oppressors. Fascists out of our city!"

"The only thing that beats fascists is a bigger crowd of anti-fascists," said Portland DSA co-chair Emily Golden-Fields at the first rally of the day.

They marched to Chapman Square, where they met up with the group Popular Mobilizations for a rally called #SupportersAreEverywhere, according to the Oregon / OregonLive.

These rallies ended around 1:30 p.m., while antifa supporters in their hoodies and black masks plus hundreds of others lingered along the sidewalks as the police repeatedly made loudspeaker announcements, KOIN reports.

These protests were meant to counter the rally scheduled for 2 p.m. across the street at Terry Schrunk Plaza called #HimToo, led by activists from the far-right group Patriot Prayer.

At the #HimToo gathering, Joey Gibson and his Patriot Prayer acolyte Tusitala "Tiny" Toese spoke and danced. KOIN reports there were no more than 75 people at the demonstration.

"One of the things I think about most is equality," Gibson said. "We believe everyone has an equal opportunity. We look into the allegations and the evidence."

Various speakers made the argument that men are being constantly overshadowed and told their experiences do not matter. Speaker Christopher Foster urged people to "join us in the fight for rights for men and accountability for women."

Another speaker with a Southern accent told KOIN he drove all the way from Arkansas to speak at the #HimToo rally. While he said he did not prepare a speech, he railed against the "Democratic women cabal" and defended Roy Moore.

Saturday's protests were just three days after an ordiance aimed at regulating protests was shot down by the Portland City Council. Mayor Ted Wheeler proposed the ordiance to regulate the time, place and manner of protests that were expected to turn violent, KOIN reports.