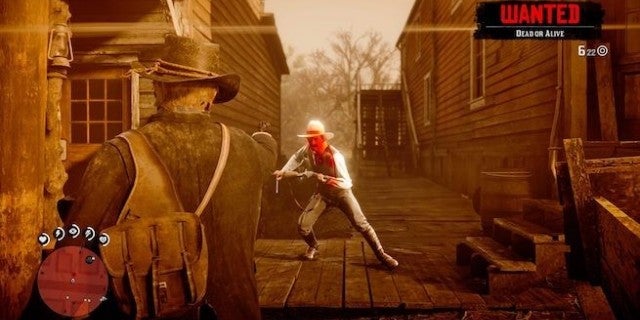 In case you did not know, there are cheats that can be enabled in Red Dead Redemption 2. And one of the best ones has just been discovered: unlimited Dead Eye.

That's right, if you're noticing that you're constantly running low on Dead Eye, and are tired of chainsmoking premium cigarettes to keep it up, you're not alone. And if you want an easy fix to the problem, this cheat is for you.

To activate the code, pause the game and head to "settings." Here you'll find the cheat menu. If you've entered any other cheats previously, they will be here. Once at the cheat menu, enter the following phrase: "be greedy only for foresight".

Just like activating any cheat in the game, activating infinite Dead Eye will affect earning trophies / achievements in-game, so make sure you have every trophy / achievement you want before going hot with it.

For those that do not know: since release players have been discovering cheat codes for the game, which are hidden in messages across the game's world via phrases like the one above.

Personally, I'm not a cheats guy, as I want my experience as authentic as possible. That said, once you beat the game, activating cheats can add a whole other layer to the experience. And if there was one cheat that would tempt me into dabbling with it, it would be infinite Dead Eye. Using Dead Eye never gets old, but managing it sure does get tedious at times. To not have to worry about it sounds awesome. Plus, who does not like more headshots?

Red Dead Redemption 2 is available for PlayStation 4 and Xbox One. At the moment of writing this, there's been no word of a Nintendo Switch port or a PC port. However, the latter has leaked numerous times, suggesting it's in the pipeline, and perhaps even arriving soon.

Also in the pipeline is Red Dead Online, which will not allow you to use these cheats. When the multiplayer mode will arrive, has not been specified, but Rockstar Games did say it would arrive before the end of November.

For more news and coverage of the critically-acclaimed open-world western, click here.