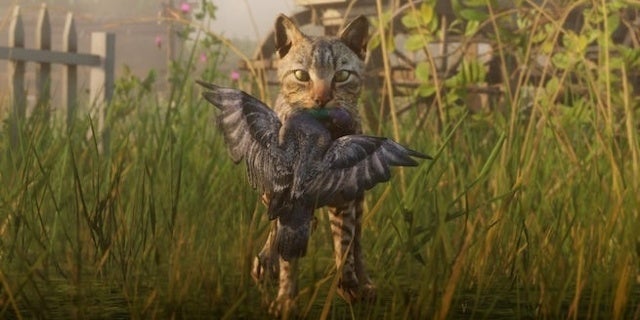 Red Dead Redemption 2 players have started a petition to have the game changed slightly so that they can pet cats in the same way they can pet dogs.

"We can not pet cats in Red Dead Redemption 2 but we can pet dogs, "the petition's creator correctly pointed out. "Wtf is this animalracism?"

In Red Dead Redemption 2, players can approach both domesticated dogs and cats to either praise or scold them depending on what type of character they want to roleplay as. When players get near a dog, however, the "Praise" option changes to "Pat" and allows them to pet the dog for a while. The video below from TriformTrinity shows what this looks like in-game as the player pets on a bluetick coonhound for around 5 minutes straight.

Cats do not get this sort of attention though since there's no option to pet a cat once players approach them. The creator of the petition shared a story about their encounter with a cat and the letdown when they found out they could not pet the animal.

"One day, I was walking in Saint-Denis and I saw a kitty," the player said. "Wanting to pet this cute little guy, I crouched to see if I could pet him like I usually do to every dogs I see (even during missions, robbery, etc) but for some reason, I got triggered by the fact that you can not Pet a mf cat in this game but you can pet all the dogs instead. I think this is bullshit. For 120 bucks, I want to pet a cat if I want to instead of getting wanted cause a lady decided to cross the street while I'm trying to drift with my horse at 20mph in the city during the day. "

It's an anecdote many players can probably relate to, especially the part about being wanted by the authorities because you accidently bumped into someone in the crowded streets of Saint Denis.

Petting cats does not sound like something that'd be on the top of Rockstar Games' priority list in terms of things that need fixing or improving in Red Dead Redemption 2, but there's always the chance the petition and discussion could prompt the developer to make a slight change so players can tread cats as they do dogs.