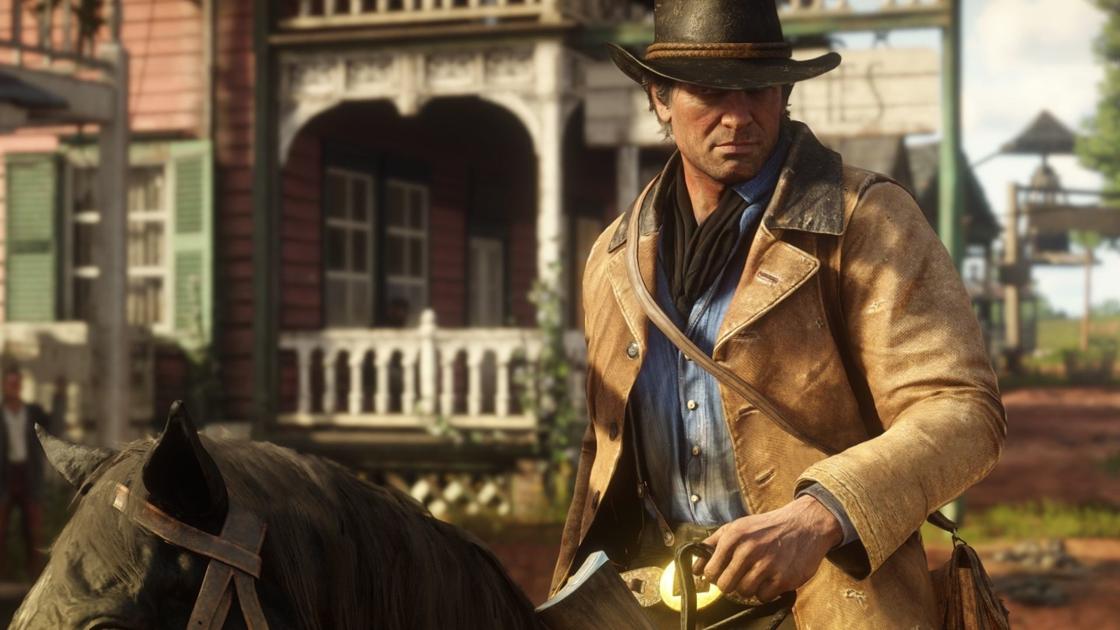 We watched a lot of westerns in the film classics course I took my freshman year at college.

And as we discussed movies like "My Darling Clementine" and "The Searchers," our professor would direct our attention to their symbolism. He'd say how their rocking chairs represented the stability of the homestead. He'd say how their wooden verandas represented the frontier itself because that was literally where the dusty chaos of the wilderness met the orderly hand of civilization. He'd say how every artistic choice, no matter how incidental it looked, served a singular vision of the American west.

I usually thought he was full of shit. Maybe some of those choices were just matters of convenience? Maybe the only thing those rocking chairs and verandas represented was the whims of the movie's props and location departments? Maybe those choices were not considered significant to the movie's artistic vision by the actual people making it?

I could not help asking similar questions as I played "Red Dead Redemption 2."

TL; DR: The leaden controls and cumbersome systems of "Red Dead Redemption 2" form an uneasy partnership with its majestic landscapes and elegant story, but the game's incredible design feats can make you forgive and forget its clumsier moments.

PLAY: Single player and online multiplayer (beta to be released later this month)

DISCLOSURE: I received a review copy of this game from Rockstar Games and completed its main story and several side missions in about 50 hours.

The latest open-world marvel from Rockstar Games makes a few debatable choices of its own. The game's main character, gunslinger Arthur Morgan, moves with the grace of a hogtied pig. It's a hassle to maneuver him into a particular spot, like when you have to pick up your hat after it's shot off every 10 minutes. And the game often commandeers him from you, slowing his dash or steering his horse as it capriciously dictates. For players coming off controlling the superhuman Kassandra in "Assassin's Creed Odyssey," Morgan feels like his boots are perpetually stuck in mud.

Then there's the time and effort it takes Morgan do the simplest tasks. Looting a corpse takes five whole seconds, so it's hardly worth scavenging everything you can from a field of dead bandits. It takes even longer to skin the deer, wolves and other animals you hunt or defend yourself against. Fast-traveling is limited, so most missions are preceded by a horse ride of several minutes. Naturally, that tires out both Morgan and his ride, and stopping to set up camp and cook some venison or feed your horse oatcakes is another labored series of inputs. And that's if you do not find yourself out of whistling range of your horse, which can mean even more dispiriting minutes sprinting across the massive desolation of the game's map.

After riding, the most common action in "Red Dead Redemption 2" is shooting. And Morgan is slicker with a gun than he is with anything else. The game loads with an aim snap that guarantees a head shot almost every time you lock on with the left trigger and nudge the right stick upward. Straying from this strategy, or turning off the snap, means dealing with the sway of both Morgan's aim and his enemies' heads. But more adventuresome players might dig the challenge. Then there's the great equalizer, dead eye, which slows time and allows you to paint targets. You can refill your dead eye meter with consumables like moonshine, but only letting the meter refill on its own will give Morgan's gunfights a reasonable degree of difficulty. Still, for all the optional challenge and minimum of frustration, shooting wave after wave of rival gangs and Pinkerton agents for 50 hours is pretty damn redundant.

So playing "Red Dead Redemption 2" takes patience. It takes patience with Morgan's weighty movements, patience with his methodical ways. The question, however, is whether that patience is part of Rockstar's design. Does it symbolize something? Maybe Morgan's stubborn manner? Maybe the hardship of survival in the west? Or maybe it's just incidental to the studio's vision?

I'm inclined to believe that the game's tedium is purposeful. Because everything else about "Red Dead Redemption 2" certainly is.

With a master's hand, Rockstar has created maybe the most vivid, studied open world ever committed to virtual space. From the foot of compactible snow blanketing its mountains to the dragonfly buzz over its delta swamps, the game lives and breathes like no other. Its willows and tobacco stalks blow in the wind, its sunbeams and moonlight flicker in the mist. It's simply breathtaking.

Behind everything in the game, living and non, is an obsession with taxonomic detail rarely found outside the books of Cormac McCarthy. You see it in the menus of information about horse anatomy and gun parts, sure, but you also see it in the lifelike movements of its animals: the way dogs wag their tails so hard their butts shake with them, the way alligators close the distance on their prey with bloodlust so absolute that the sight paralyzes you with fear. The horses do poop a bit excessively, though.

Then there are the people Morgan meets. Whether it's the strangers he helps in side quests or the passersby on the dusty trail, most of the people in the game have stories. I'm still moved by the homeless, one-armed Civil War veteran who craved human contact so much that he earnestly asked Morgan to just hold him. I'm still haunted by the last gasp of the man on the shore who died clutching a letter tying him to a certain character from the first "Red Dead Redemption." It strains the credulity of the game's world how all these people orbit Morgan, their stories climaxing the second he arrives, like any other game world. But few games stock their worlds with stories so evocative, and so beneath the surface, as to animate them even further.

The best of the stories in "Red Dead Redemption 2" may be the main one. Taking place across five fictional states on the American frontier in 1899, it sets up Rockstar's monumental 2008 western by following the Dutch van der Linde gang on its run from the law. Morgan, with his charismatic drawl and face like tenderized meat, is a magnetic presence as its lieutenant. And he has a complicated friendship with Dutch, whose Jeff Daniels voice gives him an avuncular quality that makes his cult leader insecurities all the more terrifying. As Dutch struggles to shepherd his gang through storms both literal and figurative, his judgment worsens. Toward the end, his behavior will feel familiar to anyone who's experienced the sadness of a friend slowly growing apart.

The game's writing is improved over the first "Red Dead Redemption" and especially Rockstar's "Grand Theft Auto" series. It's less expository, more elegant. And Morgan's terrific voice actor, Roger Clark, says more with tone than with words. That goes as much for Morgan's quarrels with Dutch as his fireside chats with the other members of the gang, who can be fun to befriend at camps that migrate throughout the game. The plotting is strong, too, weaving the disparate threads of Morgan's life through serendipitous meetings and sudden but dramatically earned turns.

Some moments in the game let you set Morgan's moral compass, while others do so for you. I played honorably, and the payoffs to those moments were almost always rewarding. Sometimes I saw firsthand the positive impact Morgan had on someone's life, sometimes I was praised for my decision by a seamless line of contextual dialogue. Still, there were times when I had no choice but to be disgusted by Morgan, namely a series of missions that task him with rustling money out of people in debt to the gang. But do not skip them – ultimately, they're worth it.

The same push-and-pull defines "Red Dead Redemption 2." Its rough-hewn systems wrestle with its polished storytelling, leaving you to reconcile the extremes. That may mean interpreting its leaden controls and tedious commands as symbolic of something. It may mean believing that the game slows you down so you can stop and appreciate the beauty around you. Indeed, in the absence of role-playing mechanics like XP or more enjoyable action, there's no feedback loop in the game but the simple act of discovering its wonders and mysteries.

Or reconciling "Red Dead Redemption 2" may mean reconciling the very economics of the game itself. It's been widely reported that Rockstar Games all but forced its employees to work as many as 100 hours a week to develop its 300,000 animations and other maximalist indicators of the game's scale. No world, however gorgeously conceived, is worth that human cost. And in light of that, if nothing else, the majesty of "Red Dead Redemption 2" is worth getting stuck in the mud a few times.