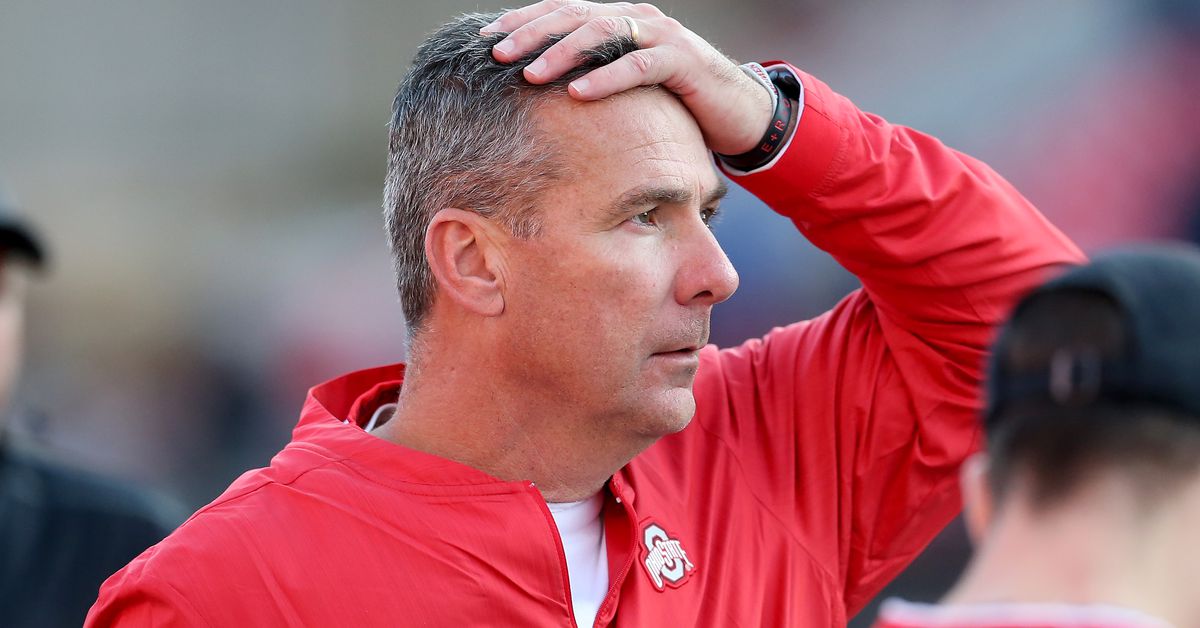 The No. 10 Ohio State Buckeyes defeated Maryland 52-51 on Saturday in one of college football's most thrilling games of 2018 so far. The Buckeyes will move on to face No. 4 Michigan next week in yet another colossal edition of The Game, but what stood out during the game in College Park had little to do with the 22 players on the field.

Just one example of him constantly slumping over and grabbing his head:

Towards the end of the game that ended in overtime, ESPN's cameras showed him slouched over on the sideline during a crucial timeout, far away from a huddle:

The whole scene looked much like the end of his time at Florida, when Meyer was clearly exhausted much of the time. The teams look somewhat similar to each other, too.

After the Buckeyes win, Meyer was even asked how he was feeling:

Tom Luginbill: "Just watching you on the sideline, very, very emotional, very energetic, how are you feeling after this win today?"

It was a little nerve-wracking to watch Meyer on the sideline, especially considering his health issues.

His mental health has suffered at different points in the past. He's also been diagnosed with an arachnoid cyst in his brain and dropped to the ground on the sideline during one 2018 game. He's dealt with "aggressive headaches" in the last two years, his doctor recently told Yahoo Sports:

"As with many medical conditions, the issue with his cyst is incurable and progressive," Cleveland.com wrote after Meyer talked in late October with local media about his health.

When asked about retirement rumors, he did not exactly shoot them down directly:

Being completely honest, there were times during the Maryland game where I was concerned about how Meyer would react.

I'm by no means suggesting or reporting that Meyer will definitely leave after this year. But look at the bigger picture here.

When Ohio State released its findings of the investigation into Meyer's handling of Zach Smith's domestic violence allegations, documents showed Meyer was fully aware of what a problem Smith was. Meyer served a three-game suspension at the start of the season, with reports of rifts between him and his bosses at Ohio State. All these things made for enough reason to wonder whether OSU would consider moving on from Meyer after this season.

On the field, Ohio State lost to unranked Purdue 49-20 on Oct. 20. As my colleague Matt Brown pointed out, Meyer was not even coaching the Buckeyes that well on the field up to that point. The Buckeyes' issues, especially on defense, have hardly gotten better since then.

Nearly a month later, the Buckeyes still have a shot to make it into the Playoff, pending wins over Michigan and Northwestern. The on-field case for Meyer to remain at Ohio State is simple to make.

But this is not so much about Ohio State football as it is about Meyer the husband, father, and grandfather.

He's 54 years old, turning 55 years old next July. That's by no means old by college football head coaching standards, but it's not exactly young. His health issues are not new, either – back when Urban was at Florida in 2009, Meyer had to be taken to the hospital for chest pains. He later admitted that he was depressed during the season and lost 37 pounds over the course of the year.

Meyer briefly announced his retirement after his '09 incident, only to return a few days later and coach the Gators to an 8-5 season in 2010, his last year in Gainesville.

After his time at Florida, Meyer took a year off from coaching while working as an analyst for ESPN. Before he could accept the Ohio State job in 2012, he had to sign a now well-known contract with his family that included things like putting his family first, and taking care of himself and his health.

I'm not saying Meyer has not done those things. But after 17 years of coaching at the head coach level, and another 15 as an assistant before that, when is enough enough? Meyer has three national championships, six conference titles, a slew of BCS and New Year's Six Bowl berths.

Just based on on-field accomplishments, he'll be inducted in the College Football Hall of Fame down the road. What else is there to win before then? A couple more conference titles? One more national championship?

Hell, former Oklahoma Sooners head coach Bob Stoops retired at 56 just because he could. He's since been seen smiling near the sidelines in Norman pretty regularly.

There's nothing else Meyer has to win in order to prove his ability – the idea of ​​just hanging it up, buying a boat, and taking a breath has to sound like a good idea on some level.