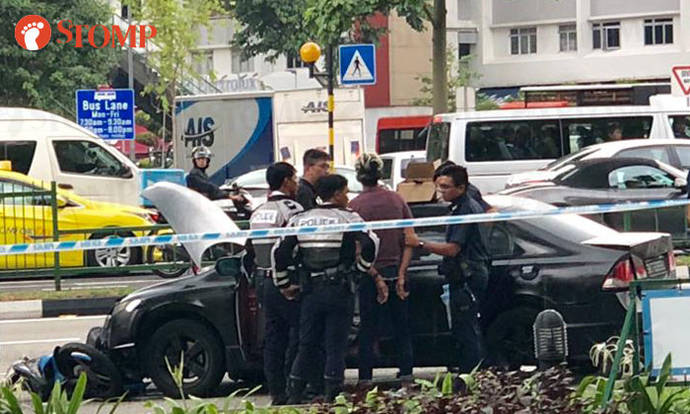 Two men were arrested for traffic offenses, possession of offensive weapons and suspected drug offenses after a police attack from Queensway to Alexandra Road on Wednesday morning (April 10). .

Stompers Pei Leng, Long and Allen tell Stomp about the event and shared photos and video taken near the Ancorpoint Shopping Center.

In the photographs, a man in a circus can be seen close to a similar black car which has collapsed in a motorcycle.

Wong told the Stomp that she had seen around 40 police officers at the scene and also that there were dog dogs.

"The siege was closed for more than four hours, causing a great amount of traffic," she said.

In response to the media question Stomp, police said a vehicle on Mei Ling Street was inspected by the Traffic Police at around 11.15am when the car driver suddenly left and then cycled.

A spokesman for the police said the driver continued to move his car and after a short drive stopped the car driver parked along the lighthouse side from Queensway into Alexandra Road.

The 21-year-old driver was arrested for traffic offenses, possession of offensive weapons and suspected drug offenses.

The 19-year-old passenger was arrested for drug offenses.