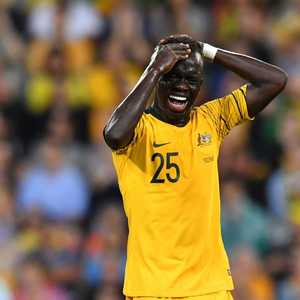 As the Socceroos returned to home soil for the first time in 12 months, they faced a major pre-Asian Cup test with a clash against powerhouse South Korea.

Despite the absences of star duo Son Heung-Min and Ki Sung Yueng, the Koreans really pushed the Aussies – and it took a last-gasp Massimo Luongo tap-in to seal a draw.

The same question marks continue to hang over this team, with goals at a premium, but some strong introductions helped to ease the concern of another low chance conversion rate. Jamie Maclaren was handed a big chance to mount a case for a regular role up front, but he was not the major winner as Josh Risdon emerged as the top performer.

Graham Arnold has spoken at length about his developing style guide, and we saw glimpses of the overhaul here. While poached Scottish-born debutant Martin Boyle nabbed a highly anticipated first cap off the bench – and played a crucial role in the dramatic equaliser.

WHAT HAVE STRENGTHENED YOUR ASIAN CUP CASE?

Heading into this blockbuster clash against a strong Asian opponent, a bigger picture approach translated to lessons about January's Asian Cup – as the Socceroos prepare to defend their title.

With Arnold still settling into his post and tinkering with the setup, plenty of positions in the final squad – and starting line-up – remain on offer. And in this match, some question marks faded, while others became even more perplexing.

For instance, it's still unclear who should be playing at striker. Apostolos Giannou scored against Kuwait and was then dropped completely from the squad, while Jamie Maclaren started up front in this match and failed to really take his chance in a largely anonymous showing.

Robbie Kruse is surely slipping from calculations after another poor outing, as Awer Mabil and new man Martin Boyle pressed their cases through telling contributions off the bench. The back four appears locked in – especially after a superb showing from Josh Risdon, who was thought to be under pressure from Sydney FC's Rhyan Grant.

The lessons were there, but Tuesday's clash against Lebanon will no doubt yield further revelations as to the make-up of the Socceroos' best XI.

IS ARNIE'S STYLE COMING THROUGH?

Arnieball is rolling out in front of our eyes, but did we gain a better glimpse into how our Socceroos will be playing long-term?

"You would've seen with Kuwait that I'm more or less playing with three No.9s, with the wingers very narrow and coming inside because it's a shorter route to goal and our fullbacks are much higher," Arnold said last month.

And against South Korea we saw further evidence of this system, and it was pretty clear who the main beneficiaries of the game plan are.

Wide men Kruse and Mathew Leckie appeared to drift more centrally, and created space for full backs Risdon and Aziz Behich to overlap down the wings. And the defenders both enjoyed strong showings going forward as they revel in the space afforded to them.

As Arnold has pointed out, it's a system similar to that used by Liverpool – even if the Aussies do not boast the quality of a Sadio Mane, Roberto Firmino and Mohamed Salah strike force. Early in the game, it led to the creation of a number of chances.

In the first 21 minutes, prior to the Korean opener, the Socceroos had already taken 7 shots and whipped seven balls into the area. While the latter stages, after Mabil entered in the 55th minute yielded 13 shots and 16 balls into the box.

The style is clear, but we're still wondering where the goals are coming from.

With Daniel Arzani gone for an entire season, there's a major void to be filled in the Aussie attack – and the man to fill it appears to be Mabil.

Handed another extended cameo off the bench, the FC Midtjylland attacker sparked the Socceroos to life and added an energy that had been lacking.

Mabil put three balls into the area, took two shots, and completed seven of his eight passes. While the man he replaced, Robbie Kruse, played 20 more minutes than him, and managed to only complete four of seven passes and did not produce a single ball into the box.

The 23-year-old is mounting a strong case for a starting spot, and showed signs he could be the x-factor Arnold is longing for in the absence of Arzani.

The boss has a big call to make, with Kruse in danger of being shafted from the starting line-up in favor of Mabil.

WHAT DOES MARTIN BOYLE ADD?

With Martin Boyle now a fully-fledged Socceroo, the question arises – does he possess the quality to warrant extended inclusion in the national team?

While he was given just 20 minutes to show his wares, Boyle managed to show enough to suggest he's likely to improve the current Aussie forward stocks. From his introduction, the Hibernian man showed determination and enthusiasm – and those traits were at play in his telling contribution.

The wide man produced the crucial touch to dislodge the ball in the area which led to Massimo Luongo slamming home the equaliser.

He showed excellent awareness and tenacity to create the chance, and will no doubt be rewarded with further minutes in games to come.

Whether he makes the final Asian Cup squad though, will be based on his performances over the next few months.

ARE WE ANY CLOSER TO SOLVING THE GOALS PROBLEM?

The Socceroos fired off 23 shots as opposed to South Korea's four across the 90 minutes at Suncorp Stadium.

And yet, it appears to be the same old story – an inability to convert the chances on the scoreboard.

During the World Cup, Jamie Maclaren was hailed as a potential solution, although he never got the chance to prove it. Well tonight was his opportunity, and he did not exactly take it. In his 70 minutes, he managed to complete four passes out of five, and failed to register a single shot.

The introductions of Mabil and Boyle appeared to add an urgency going forward, and as Rogic's rocketed effort stung the palms of the keeper, the support was on hand to tap home.

There's still plenty of work to be done ahead of the Asian Cup, but the chances are there.