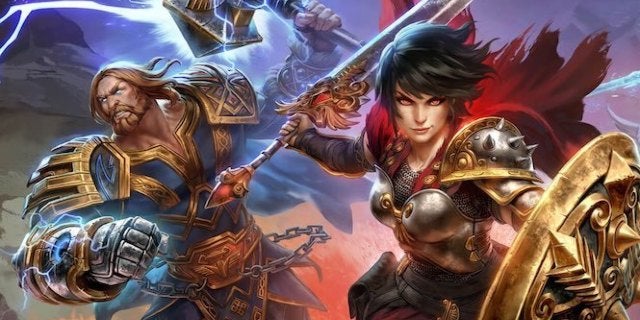 Three of Hi-Rez Studios' biggest games including Smite, Paladins, and Realm Royale are getting a cross-play feature, the developer announced.

Sharing the news of the cross-play updates at the Hi-Rez Expo, the studio announced the MOBA, hero shooter, and battle royale game would all soon befit from cross-play between select platforms. Cross-play is still several months out from actually being added to the games, according to Hi-Rez Studios' FAQ about the topic that's now on its site, but the developer said it's working with platform providers to explore cross-play options.

"We are incredibly excited to be at the forefront of this great cross-platform movement," Hi-Rez Studios said. "As we are among the first developers to offer cross-platform play and progression, we are still defining best practices hand-in-hand with platform providers."

Proving details about a more specific release timeframe for cross-play, Hi-Rez Studios said both cross-play and cross-progressions would be live in the 2.01 update for Paladins and the 6.1 update for Smite, both of those updates scheduled to be released "in mid-to-late January 2019." Realm Royale will have cross-play "from day 1 of release" with cross-progression coming at a later date.

Sony is one platform provider that Hi-Rez Studios implied it's open to working with since the PlayStation 4 currently is not listed as part of the cross-play plans. The FAQ said cross-play would be supported on the PC launcher, PC and Mac Steam, Xbox One, and Nintendo Switch with the PlayStation 4 notably absent from the list. Hi-Rez Studios did not name the platform specifically but said it is "technically ready to support cross-play on other platforms as the opportunity arises."

Input-based matchmaking is always a concern when cross-play is announced given the advantage that mouse and keyboard users could have over those on consoles, but Hi-Rez Studios said it would be up to players for the most part to decide whether they want to separate themselves by input in casual matches. Both Smite and Paladins will mix players regardless of input device by default in casual games, but both games w let players choose to only play against players who use the same input device. Ranked matches will always be separated based on input, but Realm Royale will support cross-platform matchmaking regardless of the input device being used. Following Microsoft's announcement that keyboard and mouse support would be added to the platform, Hi-Rez Studios confirmed that the feature would be added to its games on the Xbox One with plans to add the support to other platforms.

Hi-Rez Studios' full FAQ about cross-play and cross-progression can be read here.