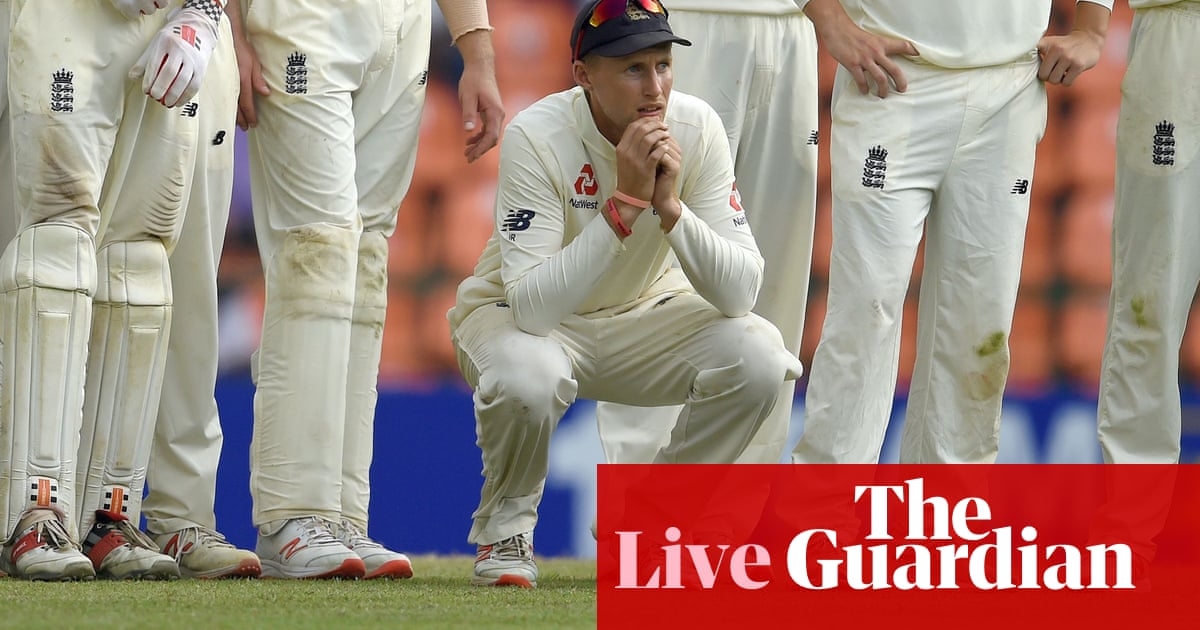 Someone else who deserves credit for this famous victory is a player England never pick in Test cricket – Eoin Morgan. Joe Root's captaincy, suddenly so much better here, has been in Morgan's image: fearless, attacking, willing to leave out a top player or two, and leading from the front. England's fastest scorer in this series has been Root himself, with a strike rate of 75, followed by his deputy (and Morgan's), Jos Buttler, on 70. It's been a performance that England's fans, usually so beset with anxiety and irony, can be wholeheartedly proud of.

So, the accounts. England won by 57 runs. Sri Lanka finished with quite a collapse, from 221-5 to 243 all out. No England seamer took a wicket, for only the third time in 141 years of Test cricket. Moeen Ali has 14 wickets in the series, at an average of 21; Leach has 13, at 19; Adil Rashid has seven, at 30. You could look at those figures and say Rashid has been the weak link, but his scalps are often the big ones, and the three of them, all so different, have formed a superb unit. The point is that they've taken 18 wickets in this match, on top of 16 last week. England have won a series with only one wicket from the great Jimmy Anderson (at an average of 105).

And now it's over to Brian Withington. "Not with a bang …" he begins. "Is it churlish of me to admit to feeling just a little cheated by that particular dénouement? A little like when it turns out that the plot turned on the existence of an identical twin. "Ha. "Great for Leach to wrap it up though." Yes, he's a trouper. He did not actually bowl all that well this morning, perhaps tense and short of sleep, but he took that return catch with his usual sang-froid.

England have not just won a Test series in Sri Lanka for the first time since the days of Nasser Hussain in 2001. They also won the one-day series, 3-1, and the single T20, so it's a clean sweep, in a country where plenty of visiting teams win nothing at all.

As well as Root, the person who deserves huge credit is Ed Smith, who took over as national selector six months ago. He brought in Jos Buttler, Sam Curran and Adil Rashid, as well as some more orthodox picks. He brought back Moeen Ali. He sent for Ben Foakes when Jonny Bairstow picked up that football injury. England's sweeping victory began with Smith's new broom.

A triumph for Root

This has been a real team effort, with runs from the new opening pair, runs down the order from Sam Curran, some terrific fielding led by Foakes and Stokes, and the three spinners – a ploy that has often failed for England – forming a highly effective team within a team. But the most credit belongs to Joe Root, who has captained the side far better in this series than any other, gave his players a license to thrill, and still found the energy to make the best and biggest innings of the match.

That's it! Pushpakumara pushes it back to Leach, it looks like a bump ball, but Leach knows it's not. The umps check, Leach has his five-for and England have their series win. A great achievement.

72nd over: Sri Lanka 241-9 (Dananjaya 7, Pushpakumara 0) A single to Dananjaya off Leach as he shovels between the two catchers breathing down his neck on the leg side. And a near-stumping as Pushpakumara drives at thin air and Foakes neatly whips off the bails. SL needs 60, which is what England's last pair put on, several weeks ago, in the first innings of this match.

71st over: Sri Lanka 240-9 (Dananjaya 6, Pushpakumara 0) Well, Moeen seems to have settled it. That's a double-wicket maiden and it's all over now bar the question of who gets a five-for-Moeen or Leach.

"Morning Tim." Morning Brian Withington. Do you ever sleep? "What a fine word 'dénouement' is, and how appropriate for the culmination of this match of twists and turns (and the obligatory Buttler in a leading role). Wondering how much Joe Root will be required to tax his little gray cells in the process? "This, as you will have spotted, was written before that killer over.

Another one! The stand-in captain Lakmal barely stands in the crease before he misses a beauty from Moeen, who goes round the wicket and gets his off-break to spin back sharply. That elusive series win is so close you can smell it.

The big one! Dickwella opts not to sweep for once, looking for the cover drive. Moeen deceives him in the flight, and the edge goes into the super-safe hands of Stokes at slip. England are firm friends now.

70th over: Sri Lanka 240-7 (Dickwella 35, Dananjaya 6) Jack Leach is bowling very full, which brought him a wicket last night when he struck Perera on the toe. It almost brings another as England go up for another LBW, but Dickwella, who seemed to have missed his favorite sweep, had actually got some bat on it.

69th over: Sri Lanka 236-7 (Dickwella 32, Dananjaya 5) The first big turner of the day, from Moeen, is a touch too short and wide to be threatening. But perhaps it disconcerts Dananjaya, who flails at the next ball, toe-ends it, and almost gives a catch to extra cover. They scamper two. The target is already down from 75 at the start to 65 now. It's quietly gripping.

67th over: Sri Lanka 231-7 (Dickwella 30, Dananjaya 2) Joe Root, making his first significant choice of the morning, picks Moeen Ali rather than Adil Rashid. No surprise there. Dickwella sweeps his first ball, in fact reverse-sweeps it, for a single, and sweeps again later in the over. Dananjaya is not a sweeper, so he keeps the bat upright and looks for the dink into the gap at point. SL need to be both calm and busy, and so far they have been.

66th over: Sri Lanka 228-7 (Dickwella 28, Dananjaya 1) Leach finishes his over, and there are no instant dramas. Dananjaya gets off the mark with a push to leg, and Dickwella reopens his account with a squirt to backward point. SL needs 73.

Who's had any sleep? Michael Vaughan barely slept during matches in the 2005 Ashes, but still won the series. Jack Leach may not have got more than a couple of winks last night, as, in only his third Test, he finds himself the main man, with four for 73 so far in the innings. He also knows that he'll be bowling straight away, because he has four balls left of his over. Has he got the calm, the nerve, as well as the desire? I suspect he has.

If anything is worth getting up at four in the morning for, it's this. After four absorbing days of this match, the chances are that England will secure the last three wickets and wrap up a Test series in Sri Lanka for the first time in 17 years. But Sri Lanka could make a series of it by adding another 75 to round off one of the great run-chases. And the rain may conceivably insist on a draw – though the forecast on myweather2.com is decent for the first half of the day, which should be more than enough.

For Sri Lanka, it's all about Niroshan Dickwella, who has rattled up 27 off 30 balls by playing the Jos Buttler way – if in doubt, sweep; if not in doubt, reverse-sweep. He could lift his team over the line with little more than a blocker at the other end. For England, it's about the spin triumvirate who have shared 31 wickets in this series – to the seamers' three, and Jimmy Anderson's one.

The spinners have formed such a team within a team that none of them has an individual five-for, but Jack Leach only needs one more wicket to change that, after destroying the top order with the new ball yesterday morning – or, as Tanya Aldred memorably put it on the OBO, taking three before cornflakes. Joe Root, when he hung the breakfast menu on his hotel door last night, will surely have ordered the same again. For the fans, hoping for some drama with their marmalade, the temptation is to dream of a win by one wicket, or two runs. Or even there.

Play is due to start a touch early because of the rain last night, so join me at 9.45am local time, which is 4.15am GMT. Three hours before sunrise. Yes, we're all mad.