Syracuse football was not 'mature enough' to handle Notre Dame

November 18, 2018 Sports, unitedstates Comments Off on Syracuse football was not 'mature enough' to handle Notre Dame 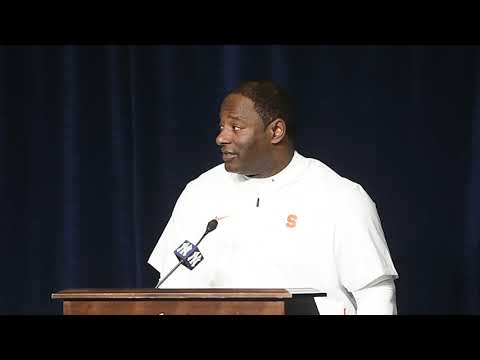 New York – Taj Harris knew what he did wrong, and this, as his coach alluded to after a 36-3 beatdown against Notre Dame, may help ease the pain of flopping on the national stage.

Now, to be sure, the Fighting Irish (11-0), heading west to lock up a spot in the College Football Playoff next week, were the better team from start to finish on Saturday afternoon at Yankee Stadium.

One play was not going to change that.

But one play did underscore the offensive mistakes that led to Syracuse football (8-3, 5-2 ACC) being kept out of the end zone for just the second time under Dino Babers.

Harris, the true freshman receiver who has been a fixture in SU's receiving corps since a narrow loss at Clemson in late September, said he made a mistake in his technique catching the ball on a downfield pass in the second quarter.

"I caught it behind my face," Harris said, "instead of in front of my face. And me catching it that way made it easy for the DB to play the ball, and he popped it out."

It turned one of the few promising offensive series by Syracuse, trailing 13-0 at the time, into a 54-yard interception return by Alohi Gilman to set up a 9-yard touchdown run and a 20-0 halftime lead.

No one play, on this night, was the difference between stunning the Irish and seeing the Orange's four-game winning streak snapped in sudden, emphatic fashion.

No one play, on this night, was the difference between shooting up into the top 10 or free-falling down in the polls.

But it spoke to the message Babers has been trying to send out amid this breakthrough 2018 season.

SU is not there yet.

Can his team, roster fully intact, hang with just about anybody in the nation? Babers believes so.

But this was not that kind of night. He lost starting quarterback Eric Dungey to an injury midway through the third series of the game. The offense finished with three turnovers against a playoff contender on one of its best defensive nights of the season.

SU needed to lean on too many young contributors against a veteran, unbeaten opponent.

"(The veterans) played a heckuva game," Babers said, "but the rest of the team was not ready yet. We were not mature enough. We were not old enough to handle this football team."

Notre Dame coach Brian Kelly knew going into the contest his team had to stop the run. It disguised some of the defensive looks, showing a five-man box before sliding in an extra defender late for more support.

We had to stop the urn game to the leve that put them behind the chains. We had some stunts that could affect the counter play, which is a big play for them,

"If you can not stop them from running the football," Kelly said, "you have no chance to slow them down."

With Dungey out of the game, it took away one of SU's best offensive weapons in that area. As Notre Dame distanced itself on the scoreboard, the chunk runs by Dontae Strickland and Moe Neal meant nothing as Notre Dame chewed up clock on back-to-back scoring drives in the third quarter that essentially put the game out of reach.

"The offense did not really help (the defense)," Babers said. "They beat us with 33 points. That's not a lot of points to us."

Though major bowl dreams were dashed, another opportunity for Syracuse to stay on track for its first 10-win season since 2001 awaits next week at Boston College. Unlike Saturday's nationally televised game against the unbeaten Irish, it will not be college football's game of the week. It will not carry New Year's Six stakes.

But it will be one that could still shape SU's bowl picture this season, one in which SU will need the same cast of young contributors that faltered here against a better opponent to play well in another road environment against a team eager to bounce back after its own tough defeat.

To do so, it might need to draw on the tough experience here in the Bronx.

"This will make them grow up," Babers said. "They'll go home. They'll hurt. I'll hurt, and with all those open wounds, they'll turn to closed scars and we'll get better and we'll remember.

"If it does not kill you, it makes you better. We're going to grow from this. We'll be better the next time we come into this situation."