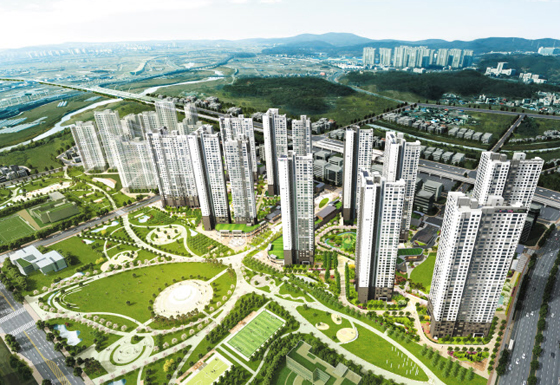 There will be a huge number of residential areas from the Tangjeong area of ​​Asan Town in Chungnam, where Samsung Display is located. Tangjeong District This is the first real estate in the Assynt area. Tangjeong Station (probation name) Seoul Metropolitan Line 1 is a good build for transport.

Developers ShinYoung City, a subsidiary of ShinYoung, an estate development company, sells Gangwon City Prugio in Tangjeong District, located in the 2-C1 and C2 of Tangjeong District blocks, this month. 2 ground floor • 40 ground floor 12, a special 84 ~ 101 range 1521 housing size room and total area (floor area) 46,883 square meters. Daewoo E & C. is the contractor. Only 77% of the small and medium sized rooms have more than 85 people living around 85% of the total.

Asan New Town is a major city in the Buljeong-dong district, Cheonan City, and Asan-si Baebang-myeon and Tangjeong-myeon, which occupy about 8.8 million square meters of land. It plans to approve around 33,000 households and 86,000 people. Tangjung Station is about 300m from Gweln City Prugio, and Tangjeong Station is being built for completion next year. You can get to KTX from the Asan Cheonan Station, one stop from Tangjeong Station, to Seoul Station in 40 minutes. In addition, Yi Soon Tha Shin Road connects the Asan and Cheonan town link just nearby, and national roads are 21 and 43, crosses south-east and south-west near. The Cheonan-Dangjin Road Road Section 1 (Asan ~ Cheonan) Asan IC is ready to open in 2022.

There are major distribution facilities such as Traders Emart, Galleria Department Store, Lotte Mart, Moda Outlet near KTX Cheonan Asan Station, and there are many commercial facilities in the Neighbor District already completed. Gwell City Mall, which is a commercial facility within the complex, will be developed as a home-based lifestyle center, with a variety of items based on Mori Building consulting, a company estate development in Japan.

A radius is around 700m of the large lush, story in the story, and height of the story. It is located near Chungnam Foreign School High School, Chungnam Samsung High School, which is a well-known local place. A nursery is a different, elementary school, a planned secondary school.

Gangwon-do Prince has a whole family Tangjeong area. There is a kitchen in the shape of & # 39; with high spatial use, and dressing room, indoor hall, grocery store, and built-in kitchen. The 84m square only. A living room is designed to avoid seeing the kitchen. Kitchen windows are often designed with small windows, not small windows, to make them feel open. There are 84 special corners in a corner ready, with kitchen design with housing security lines. There are only 101 square meters on a balcony on three sides. It has a private residence, a large dining room and a big dressroom.

The 56,000 square square neighborhood park is located south of the City Prugio in Tangjeong. When finished, a park can be used as a front yard at the installations, and some furniture source can be seen in the installations; inner park. It is expected that there will be a 20-meter space between 2-C1 block and 2-C2 block to & # 39; gives a green space to Tangjeong Station.

My underground parking space, with a complex 1320-square complex community center in the middle. The community center will include a fitness center, a driving area, a library, and a relaxing area.

Kim Eung-jung, managing director of the ShinYoung Marketing Department, said, "Gwel City Prugio is a Tangjeong area, located in the Tangjung area donkey gate, closest to the station and it is anticipated to attract Awareness of the brand recognition of the Better City accommodation and is provided by Grantown on Assynt. " South Westerly