Here's a look at who the Cyclones will face this season.
Tyler Davis / The Register 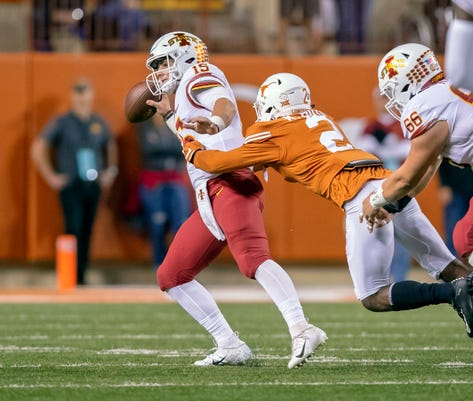 AUSTIN, Texas – When West Virginia fell to Oklahoma State earlier in the day on Saturday, a golden opportunity was awaiting the Cyclones as they kicked off. Iowa State suddenly controlled its own destiny to the Big 12 Conference title game on Dec. 1. But first, the Cyclones had to take down Texas.

Iowa State could not take advantage of the opportunity and dropped out of the race for a spot in the Big 12 championship game when the 18th-ranked Cyclones fell to No. 14 Texas, 24-10 at Darrell K Royal-Texas Memorial Stadium on Saturday night.

Iowa State fell to 6-4 on the season and more importantly, 5-3 in Big 12 play. It means Iowa State's shot at playing for a Big 12 title is now over. Finished. Instead, Iowa State will now head into its Big 12 regular-season finale against Kansas State hoping to make another case to land a nice bowl. But after losses to Oklahoma, Texas Christian and, now, Texas a title shot is no longer possible.

Here's what we learned:

The Iowa State running back was suspended for the first half of Saturday's showdown after he was ejected in the second half of last week's win over Baylor. Montgomery was tossed for throwing a retaliatory punch at Baylor's Greg Roberts. The Cyclones sorely missed the star back Saturday.

It was a long night for Purdy

The true freshman quarterback faced the toughest road test of his young career. And there were plenty of lessons learned along the way. The offensive line struggled to give him time and the hard hits Purdy has been taking finally caught up to him. The young quarterback came out of the game in the fourth quarter following another tough blow.

Purdy completed 10 of 23 passes for 130 yards and one score. He was also picked off once and ran for minus-11 yards. Kyle Kempt replaced him. It was not all on Purdy, who did not get much help from his line or his receivers. Even the pick bounced off the hands of receiver Landen Akers.

Iowa State hung its hat on its great defense for so long this season. But it's started to crack the last two weeks. The Cyclones gave up 505 yards of total offense in a 28-14 win over Baylor last week. But some timely plays helped overshadow some of those problems. They were on full display Saturday, though.

Missed tackles doomed the Cyclones as Texas did almost whatever it wanted on offense, tallying 396 total yards. Those numbers could have been even worse, too. But after building up the large lead, Texas took its foot off the pedal and cruised in the fourth quarter.