November 22, 2018 Giải trí, vietnam Comments Off on The situation for Philippine leaders to feed their children on the plane Philippine Airlines's flight assistant told her story about her children's plane on the plane. Patrisha Organo, 24, gave food to the child on the way on November 6

Patrisha Organo, 24, a 9-month-old mother of mother, said she had no choice but to help get enough formula.

"We just went for a few minutes and we walked a height of 3,000 m, I heard the baby started shouting," said Organo.

"As soon as the safe light was away, I went to tell her mother if I can help. The mother will just hear the plane … . She damages the type of formula she needs and does not do this but when the child starts shouting. "

The plane started on 6 November, but Organo did not reveal air information to protect the identity of their mother and his / her; child.

Organo, who has been a flight assistant for four years, is trying to help her mother and daughter but there is no effective way. Then, she praised the baby's feed. Organo has a 9-month daughter

"I told the manager about the event and when I suggested to feed the baby, he would not ask me," said Organo. "It was an emergency and there was no milk powder on the plane … That's the right thing."

Organo says she gave the child and her mother to the closed corridor.

"Other travelers do not know what's going on," said the flight assistant. They are all made privately, only me, the manager, the mother and this child know. & # 39;

Asked if her mother was tough, Organo said: "Her mother did not get a star. Indeed, she was very grateful and she was easier. When the baby is fed, She sits until she's land. "

"I know there are people who are worried about allowing a stranger to eat food because he or she is not healthy or drug use," he sent the person attendees.

"But as a flying supporter, I will get my health check every year. I also feed her breastfeeding, which encourages me to be responsible for taking care myself. " 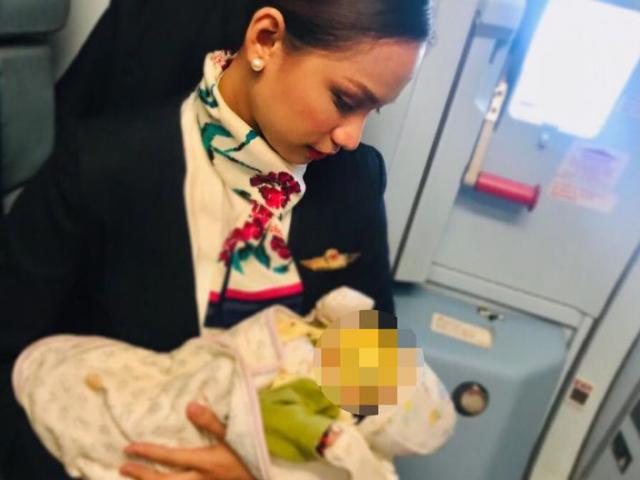 Patrisha Organo did not have the baby's bait, because she heard the children; crying on the plane.