November 27, 2018 vietnam Comments Off on The voters of Dong Nai show crime from the Deputy Secretary of the Dong Nai Party Committee 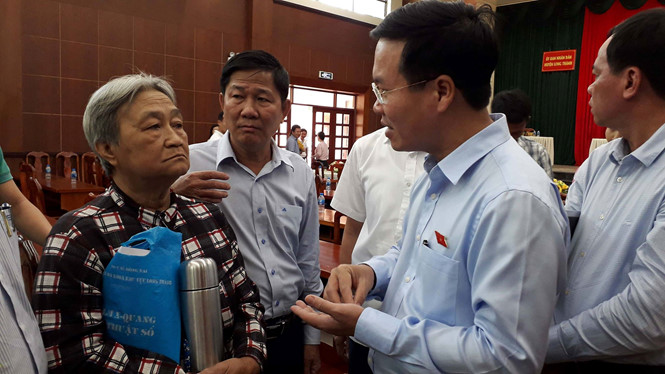 On November 27, Mr Vo Van Thuong, a Member of Politburo, Head of the Department of Propaganda of Central America, had a meeting, together with the National Assembly Nation 1 election group of the Dong Nai country with the voters of the Long Thanh area.

At the meeting, many voters went to; A number of local issues such as building, housing, land that have not been taken out.

Bui Thi Dien (who lived in the small town of Dong, Phuoc Tan commune, Bien Hoa town, Dong Nai area) said the project was to plan the Hung Phat residential area in Tan Phuoc; It's not a land-building case. However, Phan Thi My Thanh – who was former secretary of the Committee of the Area Parties of the country of Dong Nai, signed the decision to; the authority's fight and the government has set up a cleft, a land division to a private division of the backdrop. Ms Dien asked the authorities to answer this case but so far there was no solution.

In response to voter's proposals, Mr Vo Van Thuong asked Mr Tran Van Vinh, Deputy Chairman of the Dong Nai People's Committee to be in attendance; obtaining and managing the domain review, enforcement and compensation of the people. Legal compliance.

Mr Vo Van Thuong also asked local authorities to strengthen dialogue, meet people, listen to the people and solve legal issues; They must fulfill their duties in accordance with respect for the interests of the people.

Previously, in April 2018, decided to & # 39; Central Commission for Audit that Phan Thi My Thanh – CEO of the National Assembly's Nation, Dong Nai, Deputy Secretary of the Dong Nai Party Committee, is very difficult, It is difficult in the charters, members of the parties and the people, which impact negatively on the reputation of the group and alone. The Administration decided to control Ms Phan Thi My Thanh by removing all positions in the Party.