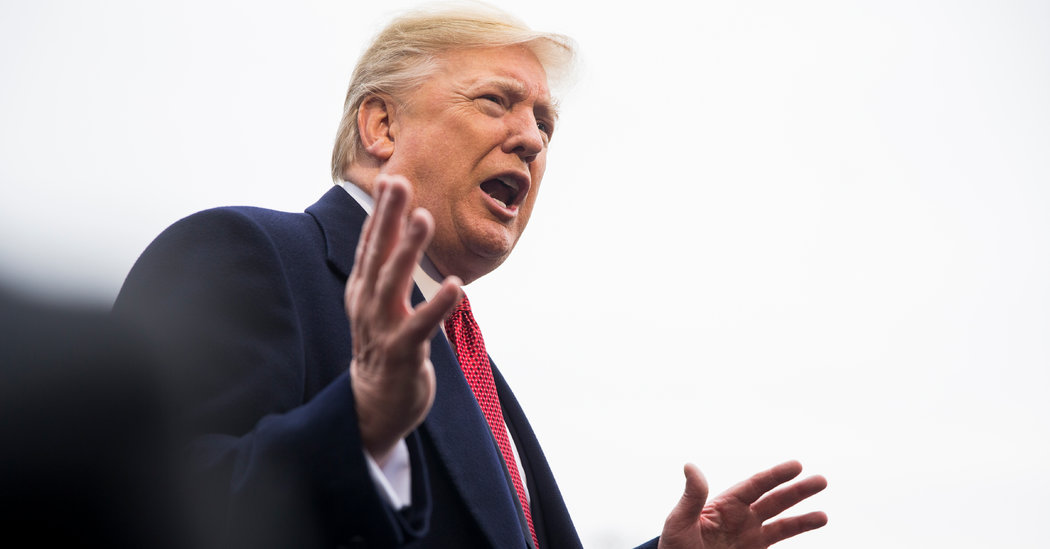 President Trump said in an interview aired Sunday that he most likely would not sit for an interview with the special counsel, Robert S. Mueller III, asserting that "we've beented enough time on this witch hunt and the answer is, probably, we 're finished.'

The president also claimed that he had no idea that his acting attorney general, Matthew G. Whitaker, viewed the Mueller investigation skeptically, despite reports that the two had multiple conversations about the inquiry over the past year.

The comments from Mr. Trump were made during a wide-ranging, sometimes testy interview with Chris Wallace, the host of "Fox News Sunday," who sat with the president at the White House last week. The president continued to be defensive about his abandoned trip to an American military cemetery during a visit to Paris last week, insulted the widely respected retired Navy admiral who oversaw the raid that killed Osama bin Laden and said he declined to listen to an audio recording of the dissident journalist Jamal Khashoggi being killed by people connected to the Saudi crown prince last month.

His comments on the Mueller investigation marked an apparent reversal from a year of claiming that he was willing and eager to be interviewed by the special counsel, who is investigating possible collusion between the president's campaign and Russian officials during the 2016 election. Mr. Trump's legal team has blanched at the idea, fearing that the president might lie under oath, and has steadily narrowed the path for such an interview.

Mr. Trump has repeatedly complained that Mr. Mueller has dragged out the investigation. Mr. Mueller has sought since late 2017 to interview Mr. Trump, whose lawyers have repeatedly tried to add conditions and reduce the scope of what the president would answer.

His lawyers are working on providing written answers to some, but not all, of Mr. Mueller's questions this week. Mr. Trump confirmed that his team would probably not answer questions about whether he obstructed justice to thwart the investigation, flatly maintaining, "There was no obstruction of justice."

It remains to be seen whether Mr. Whitaker would sign off on a subpoena for testimony from Mr. Trump if Mr. Mueller sought one; the president's advisers believe that he would not do so.

Before becoming acting attorney general this month, Mr. Whitaker made numerous public statements critical of the Russia investigation, displaying open hostility toward the special counsel on television and social media – a fact that Mr. Trump insisted he was unaware of in the interview.

"I did not know he took views on the Mueller investigation as such," Mr. Trump told Mr. Wallace. He said that even knowing that now, "I do not think it had any effect."

Several news outlets have reported that Mr. Trump and Mr. Whitaker discussed the inquiry in the Oval Office while Mr. Whitaker served as the chief of staff to the attorney general, Jeff Sessions. The day after the midterm elections, Mr. Trump forced out Mr. Sessions, who had long endured the president's wrath over his recusal from the investigation.

When Mr. Wallace pointed out to Mr. Trump that Mr. Whitaker had predetermined that there was no collusion in his public commentary over the last two years, Mr. Trump said: "He's right. What do you do when a person's right? There is no collusion. He happened to be right. I mean, he said it. So if he said there is collusion, I'm supposed to be taking somebody that says there is? "

The president also appeared cool on the likelihood that his embattled Department of Homeland Security secretary, Kirstjen Nielsen, would keep her job much longer.

Asked a similar question about his chief of staff, John F. Kelly, whose understanding of politics the president has privately questioned, Mr. Trump replied, "I have not even thought about John in terms of this."

When the discussion turned to Mr. Khashoggi's violent death, Mr. Trump said there was "no reason for me to hear the tape."

"Because it's a suffering tape, it's a terrible tape," he said. "I've been fully briefed on it. There's no reason for me to hear it. In fact, I said to the people, 'Should I?' They said: 'You really should not. There's no reason. 'I know exactly – I know everything that went on in the tape without having to hear it. "

The president over the weekend resisted reports that the C.I.A. had concluded that the crown prince, Mohammed bin Salman, ordered Mr. Khashoggi's murder. He has insisted he is waiting for more information.

Mr. Trump also criticized the retired Navy SEAL commander William H. McRaven, who did not endorse anyone in 2016 but has excoriated the president's leadership in office, as a "Hillary Clinton fan" when Mr. Wallace mentioned his name. Mr. Trump then suggested that Mr. McRaven did not move fast enough to capture the mastermind behind the Sept. 11, 2001, attacks.

"You're not even going to give them credit for taking down bin Laden?" An incredulous Mr. Wallace asked.