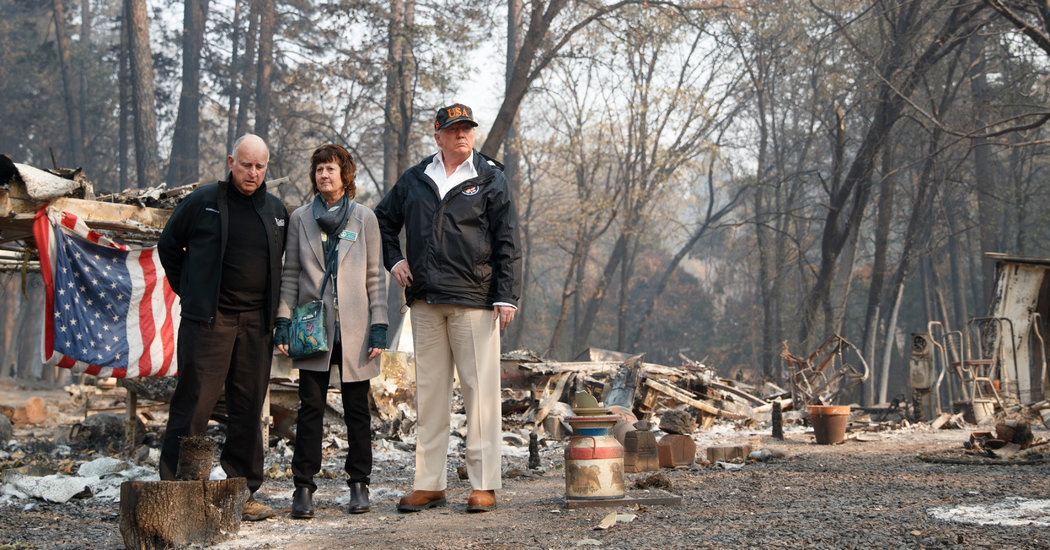 Calling forest management "a very big problem," he said he had discussed the topic with Mr. Brown.

Brad Weldon, a carpenter who lives next to the mobile home park that Mr. Trump toured, said he was happy the president had visited. "It will open his eyes to what it is," he said. Mr. Weldon, 63, said fires occur regularly during the dry summer months but nothing like the inferno that started Nov. 8.

Mr. Weldon described embers larger than basketballs flying past his house and a fire so intense that it roared as loudly as an aircraft engine. When storage sheds holding firearms and a nearby shop selling ammunition both caught fire, it set off hundreds of rounds, sending bullets flying. The ground of his house is still littered with casings and slugs.

"Everything around us was on fire," said Mr. Weldon, who successfully defended his home with a garden hose and five-gallon buckets. He is one of the few residents of Paradise still in the town, which has been evacuated.

It was just the president's second visit to the country's most populous state since he was elected, underlining the depth of the divide between liberal California and a conservative administration. In campaign rallies before the midterm elections, Mr. Trump and Republican candidates singled out the state as a subject of derision over its high taxes, embrace of "sanctuary cities" or liberal social policy.

Issues like environmental regulation and recreational marijuana use have also become political flash points, and the wildfire was no exception.

Last week, as anger swelled in California over the president's comments blaming forest management, Representative Kevin McCarthy of California, the House majority leader, called Mr. Trump and described the severity of the fires.