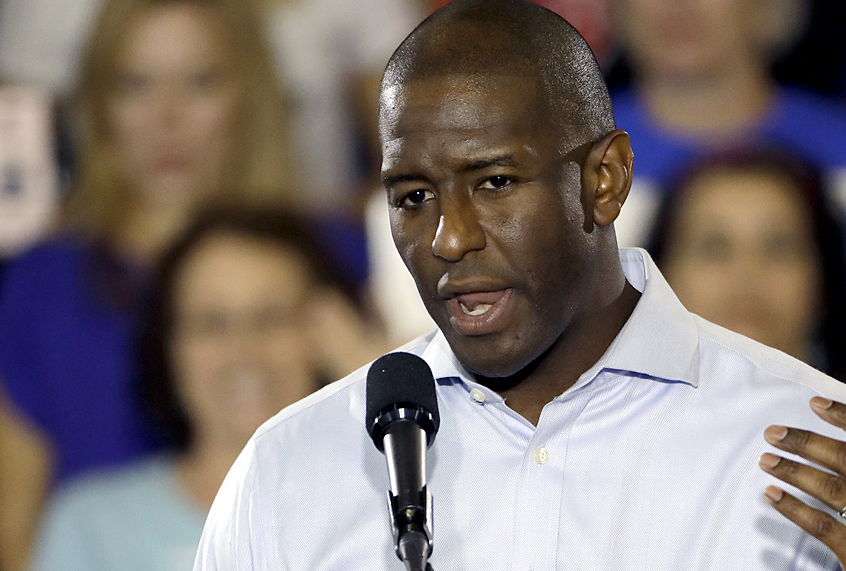 Andrew Gillum, the Tallahassee mayor who until recently was the Democratic candidate for governor of Florida, conceded to his Republican opponent on Saturday.

"We promised to fight until every vote was counted, and obviously we are now closing out the hand recount phase. R. Jai and I wanted to take a moment to congratulate Mr. DeSantis on becoming the next governor of the great state of Florida. This has been the journey of our lives, "Gillum said in an announcement that he broadcast on Facebook Live on Saturday while standing next to his wife, according to The New York Times. He also addressed the post-election controversy by acknowledging, "We need to update Florida's elections system and bring it into the 21st century."

Gillum's opponent, former Rep. Ron DeSantis, had not yet called Gillum as of the Times' report, but did post a statement on Twitter accepting his concession.

"This was a hard-fought campaign. Now it's time to bring Florida together," DeSantis wrote in a tweet that included Gillum's statement.

President Donald Trump, who in addition to openly supporting DeSantis has also been a close ideological ally of the former Republican congressman, also congratulated Gillum on Twitter.

"Congratulations to Andrew Gillum on having run a really tough and competitive race for Governor of the Great State of Florida. He will be a strong Democrat warrior long into the future – a force to reckon with!" Trump wrote on Twitter.

Gillum's post-election battle with DeSantis has proved almost as interesting as the election itself. After initially conceding the election, he was pressured by staff members and members of organized labor into re-entering the race after Florida's secretary of state ordered a automatic recount. Gillum conceded again on Saturday night after deciding that, because he was still trailing by 34,000 votes, victory was out of reach.

One lingering question that remains about the DeSantis-Gillum election is whether race played a factor in Gillum's loss. The Tallahassee mayor would have been the Sunshine State's first African American governor if he had been elected, and some Gillum supporters are suspicious of possible racism given that most polls showed him ahead of DeSantis shortly before Election Day. As the Tampa Bay Times reported on Friday:

Like so many Democrats heartbroken by the narrow loss of Florida's first black nominee for governor, Judy Beck is pretty certain why Andrew Gillum lost.

"Andrew Gillum would have won if he were white," said Beck, a St. Petersburg retiree and registered Democrat.

That sentiment is widely shared among Gillum supporters, who saw poll after poll suggest Gillum was headed for a victory and likely to perform stronger than Democratic U.S. Sen. Bill Nelson. Both Democrats barely lost their races in the preliminary counts, but Nelson, who is white, wound up winning 43,000 votes more than Gillum.

"I'm not one to call racism unless I smell it, feel it, touch it, walk with it," Rouson said. "But there are many who would argue, and make good points, that racism did have a role."

The article noted that there were other complicating factors which could have contributed to Gillum's surprise loss, including the "strikingly large number of black voters in Florida who chose not to vote for Gillum" and the fact that he ran as a staunch liberal in a state that had elected Republican governors in the previous five elections. On the other hand, DeSantis was accused of racial insensitivity (or perhaps even outright racism) during the campaign, particularly for asking Florida voters not to "monkey this up." During a debate, Gillum famously told Florida voters, "I'm not calling Mr. DeSantis a racist. I'm simply saying the racists believe he's a racist."

Matthew Rozsa is a breaking news writer for Salon. He holds an MA in History from Rutgers University-Newark and is ABD in his PhD program in History at Lehigh University. His work has appeared in Mic, Quartz and MSNBC.
MORE FROM
Matthew Rozsa

BROWSE SALON.COM
COMPLETELY AD FREE,
FOR THE NEXT HOUR

No tracking or personal data collection
beyond name and email address