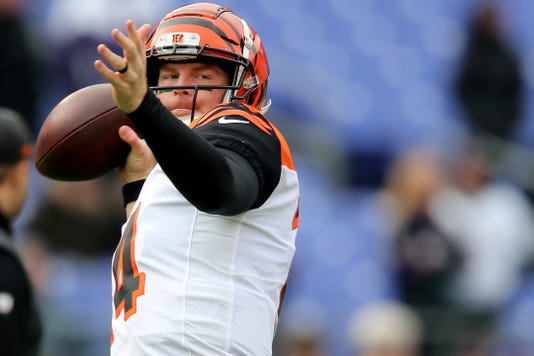 BALTIMORE – Follow along for updates and commentary as the Bengals take on the Ravens at M & T Bank Stadium.

John Ross made a contested catch!

The second-year wideout now has 10 catches on the year, four of them for touchdowns. The Bengals have outscored the Ravens 14-0 in the third quarter, with Andy Dalton finding himself after a rough first half.

A Shawn Williams interception, a Matt Lengel touchdown catch, and just like that the Bengals lead 14-13.

The Ravens were off an running again after getting the ball to start the third quarter. But Lamar Jackson turned what looked to be a good play in the making into disaster by throwing the ball right to Williams.

Williams has a team-high four picks on the season.

What went right: The defense looked to have figured out the one-dimensional offensive scheme the Ravens are running with rookie quarterback Lamar Jackson. While the Ravens did not find the end zone again after scoring seven points on the game's opening drive, two Justin Tucker field goals gave them a six-point lead at the break. Considering the Ravens drove inside the 10-yard-line late in the half, that's a win for the Bengals defense.

Did you notice: Billy Price played the part of a piano bench when the Bengals celebrated Joe Mixon's touchdown. Mixon sat on Price and played the piano, Bobby Hart was the conductor in the offense-wide skit.

The Bengals allowed points inside of the two minutes left in the first half for the ninth time in the past 10 games (19 of 26 dating back to last season).

A Ravens holding call inside the 10-yard line likely cost them a touchdown. The penalty nullified a first down run and the Bengals held on for the stop on third-and-10.

The Bengals needed that drive. Joe Mixon punched it in from a yard out, but the play of the drive was Tyler Boyd's catch on third-down. The Bengals were 0-for-3 on previous third downs before Boyd's 29-yard gain.

Defense has gotten a few stops. The offense has come to life. We've got a tilt going here.

#Bengals put together a nice scoring drive to open the second quarter, capped off by a Mixon rushing TD. #Bengals@ENQSportspic.twitter.com/gEUMvyDowR

What went right: The Bengals defense settled down after the Ravens' touchdown on the opening drive, holding Baltimore to 19 yards and two punts.

What went wrong: The Bengals offense had three punts and totaled just 25 yards. They were 0-for-3 on third down.

Did you notice: Marvin Lewis had a chat with Dre Kirkpatrick after the cornerback was flagged for unsportsmanlike conduct for his role in the scrum that initially included Michael Crabtree and William Jackson. Lewis discussed earlier this week the potential change in time allocation during the game for such moments due to his duties as both head coach and defensive play-caller.

#Ravens score on opening drive. Dre flagged for a penalty and Lamar Jackson trying to be slippery. #Bengals@ENQSportspic.twitter.com/m5EiDF8Opa

Welcome to the show, Lamar.

Rookie quarterback Lamar Jackson led the Ravens down the field and into the end zone on the first drive of his first career start. Jackson had five carries for 46 yards, do not pass.

And the Bengals defense – woof. New coordinator – hello, Marv – same result. The Ravens were 2 for 2 on third down, both runs by Jackson. And a scrum broke out in the red zone after Michael Crabtree and William Jackson got heated. Dre Kirkpatrick was hit with an unsportsmanlike conduct penalty for running in and pushing Crabtree.

Not a good start for the Bengals. Obviously. A third-and-out on offense and the defense was dominated via the ground game and a rookie quarterback.

A couple interesting things happened on the Bengals opening drive. They used Gio Bernard and Joe Mixon out of the backfield together on the first play. The play-action pass to Gio gained eight.

Then Auden Tate caught his first career pass on third down. But the rookie was just short of the first down and the Bengals had to punt.

It will be at least another week before A.J. Green re-joins the Cincinnati Bengals offense.

The wide receiver is inactive and will not play Sunday against the Ravens.

Marvin Lewis said earlier this week he was "hopeful" Green, who has not played since injuring his toe against Tampa Bay in Week 8, could play in the AFC North matchup.

Green made the trip with the team, but he did not participate in pregame warmups.

All three Bengals listed as questionable on Friday are active. Vontaze Burfict (hip), Dre Kirkpatrick (concussion) and John Ross (groin) could play after a week of limited practice participation.

Hardy Nickerson will start in place of Brown, Vinny Rey for Vigil and Ross for Green.

BX: Bengals message with county deal about staying, not leaving