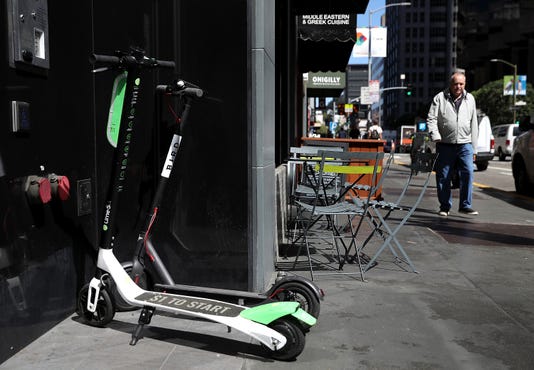 Pedestrians' "lives are being destroyed by unregulated scooters," he said from the audience during a session on whether "micro-mobility" devices like scooters are here to stay. "We are losing the right to go for a walk."

Freeman's comments sparked a debate about the safety of scooters last week at L.A. CoMotion, a transportation conference drawing innovators and transit companies from across the U.S. to discuss what organizers call "the urban mobility revolution." As manufacturers showed off the latest gear and products, including scooter chargers, electric bikes and even electric unicycles – one entrepreneur boasted his electric skateboards are capable of speeds up to 25 miles per hour- city officials and pedestrians fretted over what to do about increasingly crowded sidewalks, providing a dose of reality to the mostly sunny outlooks on innovative ways of getting around in crowded cities.

So-called "dockless" scooters – meaning you ride them and leave them anywhere – began appearing on city sidewalks across the nation just over a year ago, quickly becoming a scourge to municipal leaders worried about safety of both riders and pedestrians, not to mention the street clutter. Cities have only recently started to take action by limiting the number of scooters and cracking down on where they can be ridden or parked. Scooter companies themselves say they are not opposed to reasonable regulation as more riders treat scooters as a serious means of transportation – a handy way to go short distances – not just as a novelty.

In response to Freeman's question at the conference, a representative of the one of the largest scooter operators, Bird, struck an empathetic note.

"It's really critical we figure this out," replied YJ Fischer, Bird's senior director of global partnerships. Regulations could cost operators, but "we are willing to make those investments in the community."

Transit experts see scooters as another way for commuters to bridge the link from their homes to bus stops or rail stations. Besides Bird, other upstarts have included those with similarly catchy names like Lime, Scoot, Skip and Jump. Scooters are serious business: Jump is part of ride-hailing service Uber. And automaker Ford just paid more than $ 40 million to buy scooter startup Spin.

Only now, after a summer of scooter mayhem, are many cities starting to cope.

In California's urban centers, where the scooters have become as common as taco trucks, the city of Beverly Hills opted to impose a six-month scooter ban. San Francisco issued a temporary ban, then limited the number of operators to two, while Santa Monica is experimenting with designating some street parking spaces for scooter parking. Other cities have tried similar approaches, including Nashville, Denverand Washington, D.C.

San Jose, California, Mayor Sam Liccardo said in an interview that he's trying to use technology to rein in scooter issues. He said he's asking scooter companies to come up with plans to ensure their products are used safely and not in a way that interferes with walkers. One idea: Use "geo-fencing" – a technology that keeps devices from working outside a designated area – to keep scooters off sidewalks.

Another idea to prevent scooters from piling up on sidewalks would be to keep charging users until they are properly parked. He said he's acting on complaints about sidewalk riding or scooters left everywhere.

"We get a lot of complaints," he said in an interview after speaking at the conference. "There is no question it is a problem anywhere in dense neighborhoods where we expect a lot of foot traffic."

At the conference, there was some hope for bringing peace to the streets. A couple of startups offered docks for what were previously dockless scooters. A startup called Swiftmile, for instance, showed one in which scooters could be plugged in to recharge instead of being left helter-skelter around the city for workers to hunt down and take in for recharging and redeployment.

Freeman, a former professor of marketing, said despite the gains, the problems, at least in San Diego, remain.

He said he came to the cause when a first-time scooter rider ran into his dog, River, as they strolled in a park. "He was mildly apologetic," he said of the rider, and thankfully, the Shiba Inu was unhurt. That was only the start.

"The next point was the neighbors. They said 'I am afraid to go for a walk,'" he recounted.

Freeman said he has taken the cause of scooter regulation to two of his city's council committees. He even did a survey in which talked to nearly 100 riders, about half of which were San Diego tourists, with most admitting they rode on sidewalks to get away from cars.

But he said the scooter nightmare continues and police are not issuing enough tickets to sidewalk riders.

"This is badly affecting our quality of life," he said. "It is a fundamentally unsafe form of transport."