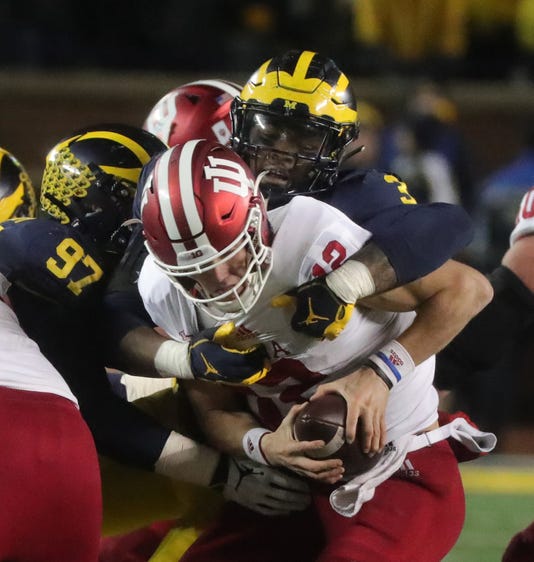 Michigan football junior defensive end Rashan Gary has not had a chance to rack up many sacks this season.

Gary, a preseason All-American, suffered a shoulder injury before the season opener against Notre Dame. He appeared to aggravate the injury against Nebraska and Northwestern, and then sat out the following three games against Maryland, Wisconsin and Michigan State.

Gary is back now. And he had his best statistical showing in Michigan's 31-20 win over Indiana, tallying nine tackles (1.5 for loss) and 1.5 sacks.

With 1:42 left in the fourth quarter, Gary got to Indiana quarterback Peyton Ramsey on a key third down.

Gary started his rush outside before coming back inside to take down Ramsey and force a long fourth down.

"We needed it just to close out the game," Gary said, "and having my brothers telling me, 'Come on, come on, let's get it,' that made me feel good."

Gary will be crucial in the next week's game against Ohio State, especially after senior defensive end Chase Winovich left Saturday's game with an injury.

Gary appears to have put his previous injury behind him.

"Oh, man, I'm right where I want to be," he said. "Having the trainers behind me, pushing me to get treatment, and having my teammates behind me, that's all the motivation I need. I'm right where I need to be and going into next week, just got to have a good week in practice, and like I said, see what happens on Saturday. "

Defensive linemen do not often have a chance to intercept passes.

Michael Dwumfour understands this well. Entering Saturday's game, the redshirt sophomore defensive tackle had not picked off a pass since fifth grade. He said he never thought it would happen again.

With Indiana facing a fourth-and-3, Hoosiers quarterback Peyton Ramsey dropped back to pass. His attempt was deflected by junior linebacker Devin Bush Jr. – and Dwumfour happened to be in the right place at the right time.

"That's our rule, that's our motto: Run to the ball and good things will happen," Dwumfour said. "So it was either I would get a big hit or situation like that, (Devin) Bush got a PBU and the ball was in the air, so I just grabbed it. "

It was one of two turnovers Michigan forced on the day. And for Dwumfour, it was certainly meaningful.

"I was yelling while I was on the ground, I could not believe it," he said. "It felt like a movie."

Stueber fills in for Bushell-Beatty

But he left in the first quarter and was replaced by redshirt freshman Andrew Stueber.

"Yeah, Juwann came out of the last game, he was working through something," Harbaugh said. "Trying hard to go, but felt like Stueber would be more effective. Get (Juwann) back to 100 percent next week."

Bushell-Beatty has started every game this season and has emerged as an upper-echelon right tackle.

Stueber replaced Bushell-Beatty after the latter suffered a lower-body injury in the fourth quarter of Michigan's 21-7 win over Michigan State in October. It's unknown whether Bushell-Beatty has re-aggravated that injury or if he is dealing with a new one.

Feature: How did Michigan revive its O-line? Start with a bad basketball player

Download our Wolverines Xtra app for free on Apple and Android devices!