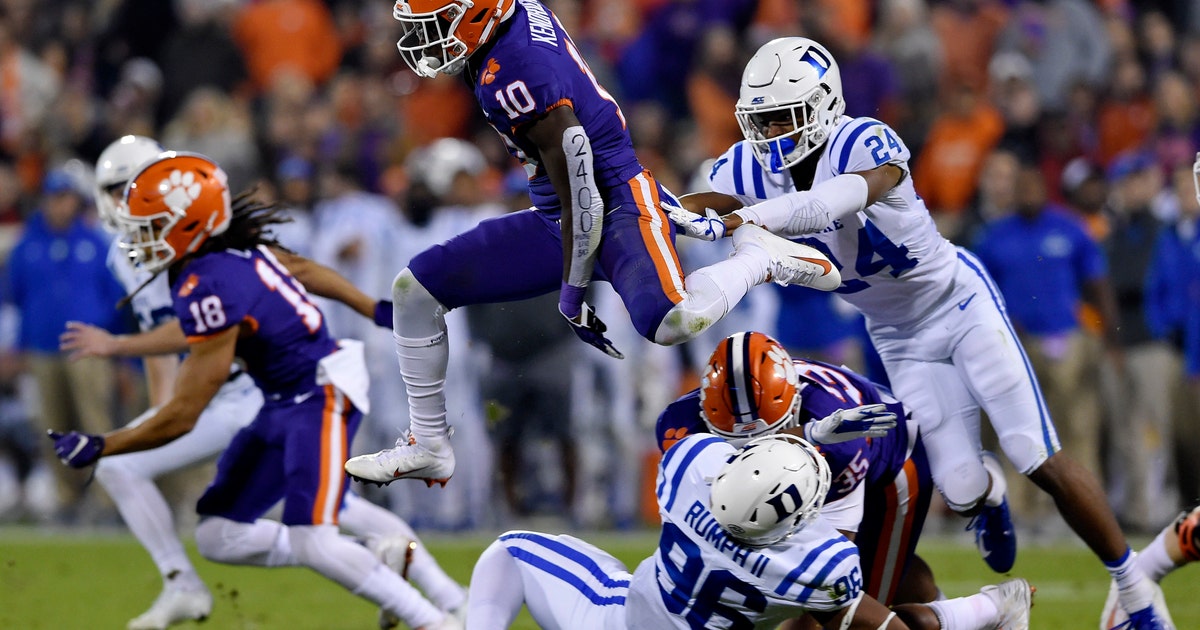 CLEMSON, S.C. (AP) – Clemson finished perfect in the Atlantic Coast Conference with a less than perfect performance that still ended with another blowout.

The No. 2 Tigers (11-0, 8-0, No. 2 CFP) beat Duke 35-6 on Saturday night, rebounding to win their six straight league game by at least 20 points after falling behind 6-0 and getting just one first down on their first three drives.

The early struggles were almost refreshing for Clemson coach Dabo Swinney, who said he appreciated the challenge of making adjustments and motivating his team in the locker room at half.

"You walk in, you win 35-6, and you have some people who are disappointed," Swinney said, smiling after the game.

Clemson finished the ACC season 8-0 for the second time in four seasons, The Tigers lost just one ACC game in 2016 and 2017, and will try to win a fourth straight conference title Dec. 1 against Pitt.

Freshman quarterback Trevor Lawrence was 0 for 7 on third downs in the first half and the Travis Etienne ran for just 4 yards as the Tigers led 14-6 at the break.

But Etienne ran for 77 yards on four carries in the second half with touchdowns runs of 27 and 29 yards, and Lawrence broke it open with a 10-yard TD pass to T.J. Chase early in the fourth quarter – his final play in another Clemson blowout.

"We still won the game big," Lawrence said. "That's what we came out here to do."

The Blue Devils had 127 yards in the first quarter, then only 135 yards the rest of the game.

"We had opportunities there and we did not take advantage of them. With a team of this caliber, it is going to catch up with you, "Duke coach David Cutcliffe said.

Clemson had four sacks, keeping the Tigers among the national leaders.

The Tigers did get an injury scare. Senior Hunter Renfrow, whose catch in 2016 won the national title for Clemson over Alabama, left the game in the first quarter after setting a team record catching a pass in his 39th straight game.

Co-offensive coordinator Jeff Scott said Renfrow hit his head falling and should be back next week. "He still knows when he is getting married," Scott said after the game.

Duke: Those two first-quarter, red-zone drives that ended in field goals kept the Blue Devils from putting real pressure on Clemson for the first time in nearly two months. Duke also struggled, like many teams do, to get big plays on Clemson's defense. The Blue Devils only had two plays go over 20 yards. Duke has never beaten a team in the Top 3 in the AP poll. And for Blue Devils fans, there is perhaps a small bit of revenge on the horizon. The No. 1 men's basketball team hosts No. 19 Clemson on Jan. 5.

Clemson: The no-drama Tigers keep taking care of business after turning the offense over to Lawrence. Since the 27-23 win over Syracuse in Lawrence's first start (and where a blow to the head took him out in the second quarter), Clemson has outscored its opponents by an average of 42 points in the past six games. Clemson also finished 8-0 in the ACC for the second time in four seasons – the only times they've been 8-0 since the league's 1992 expansion. Florida State has done it nine times, but not since the Tigers took control of the league with the first of their three straight ACC titles in 2015.

Clemson should remain second in the AP Top 25 and the College Football Playoff polls, just like the Tigers have since riding out their five-week dip after a 28-26 win at Texas A & M the second week of the season. Maybe No. 1 Alabama's 10-10 halftime score against The Citadel means the Tigers get a first place vote or two?

Lawrence has been sacked just once in the past six games and the freshman quarterback welcomes the protection from an offensive line that gets overshadowed a little by all the likely NFL Draft first round picks on the defensive line.

"It's really, really nice having guys like that," Lawrence said.

Duke: The Blue Devils finishes the regular season Saturday hosting a Wake Forest team that needs a win to be bowl eligible.