Northwestern stays in stride with 24-14 win at Minnesota

November 17, 2018 Sports, unitedstates Comments Off on Northwestern stays in stride with 24-14 win at Minnesota 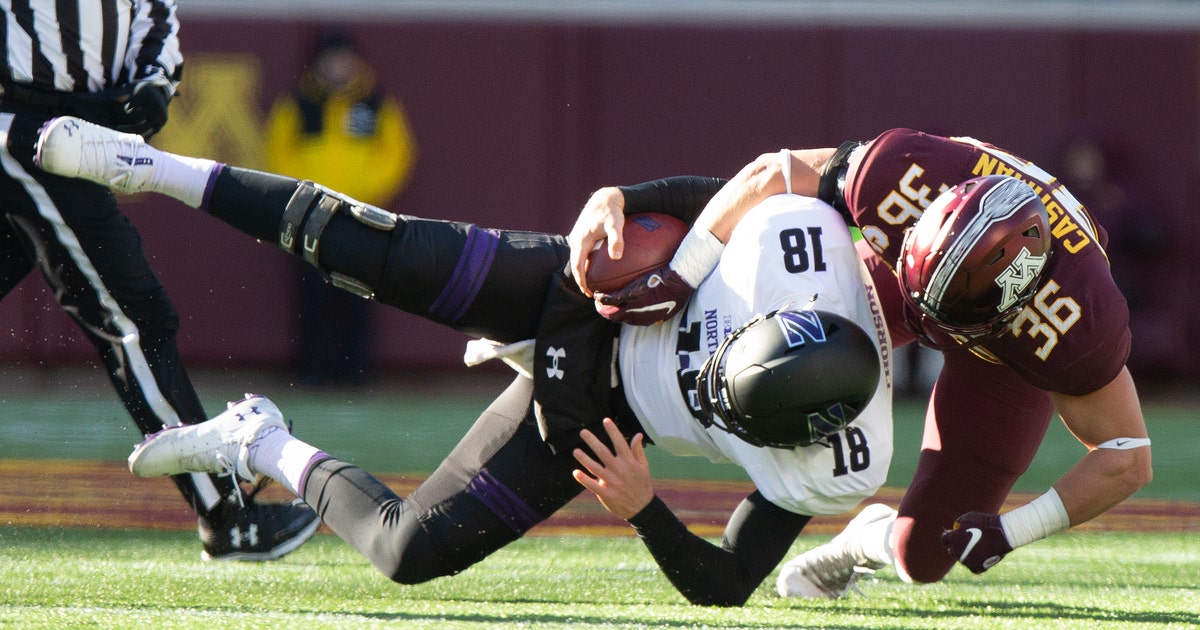 MINNEAPOLIS (AP) – Isaiah Bowser rushed for 85 yards and two touchdowns, and No. 24 Northwestern turned three turnovers by Minnesota quarterback Tanner Morgan into 10 points on the way to a 24-14 victory on Saturday that stretched its program-record road winning streak to eight games.

Clayton Thorson completed 15 of 21 passes for 230 yards without a turnover and had a 13-yard touchdown run in the first half for the Wildcats (7-4, 7-1, No. 22 CFP), who have their best Big Ten record since 1996 when coach Pat Fitzgerald was in his final season as a player.

Nate Hall had two interceptions for the Wildcats, who have won 14 of their last 15 conference contests, including 11 games in a row against opponents within the West Division they clinched the week before. Hall, who also made the tackle on a fourth-and-1 stop of Seth Green at the Northwestern 26 in the second quarter, was ejected for targeting on a helmet-to-helmet hit on Morgan in the fourth quarter.

Mohamed Ibrahim rushed for 98 yards and a touchdown and Blake Cashman had a sack among his career-high 20 tackles for the Gophers (5-6, 2-6), who fell to 4-13 in conference play under coach P.J. Fleck.

With a kickoff temperature of 23 degrees, which was actually slightly warmer than when Minnesota beat Purdue here last week, Thorson and the Wildcats played the field-position game well. The secondary missing three injured starters complemented a strong pass rush led by Joe Gaziano, who forced a fumble by Morgan with a sack in the fourth quarter, setting up a short field goal.

That came right after a 68-yard completion on third down from Thorson to J.J. Jefferson, who slipped past freshman safety Jordan Howden and was tackled at the 2 before Bowser's second score.

Morgan finished 19 for 32 for 197 yards and a late touchdown pass to Tyler Johnson, who topped the 1,000-yard mark for the season. Minnesota's streak of four straight games with 400-plus total yards, the longest for the program in more than 12 years, was stopped.

After cracking The Associated Press Top 25 for the first time this season following last week's win at Iowa, Northwestern will remain a ranked team for now. The Wildcats are not part of the College Football Playoff conversation, but to be headed for the Big Ten championship game in December after losing at home to Akron and starting the season 1-3 in September is quite an accomplishment.

Northwestern: Fitzgerald implored his team to maintain a "pedal-down" mentality despite the outcome of this game having no bearing on the Wildcats' bid to become Big Ten champions and reach the Rose Bowl. Right after the Gophers tied it with 2:18 left in the first half, they responded with authority. Kyric McGowan had a 39-yard kickoff return, and Thorson followed two straight completions with his untouched run into the end zone to take the lead for good.

Minnesota: With a freshman quarterback, limiting turnovers this season was bound to be one of the biggest challenges for the Gophers. They entered the week with a minus-6 margin that was the second-worst in the Big Ten. Both of Morgan's interceptions were risky throws into heavily covered areas. He also fumbled at the 2-yard line in the second quarter that Ibrahim recovered, before he scored three plays later.

Northwestern: Hosts Illinois next Saturday. The Wildcats have won five out of the last six meetings.

Minnesota: Plays next Saturday at Wisconsin, where the Gophers have lost 11 straight times since 1994.