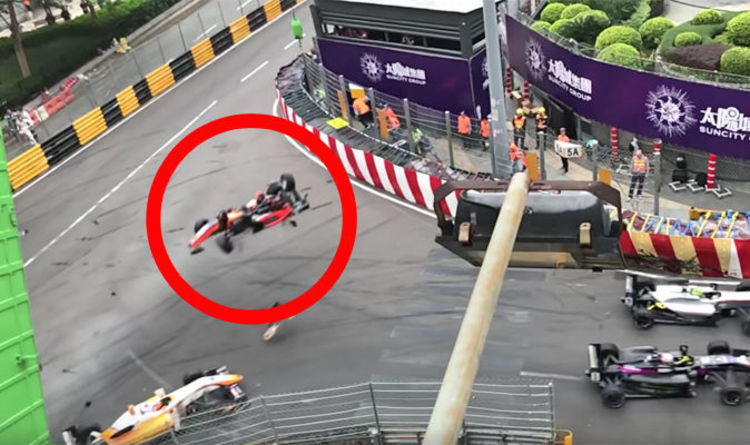 Florsch's car soared over crash barriers on a turn during the Macau Grand Prix and came to a standstill in a photographers' bunker.

The 17-year-old was taken to hospital with a fractured spine but is conscious and has since tweeted about the incident.

Fans were left horrified by the accident, which happened when Florsch's car appeared to drive into a car in front before becoming airborne.

And a fresh video of the incident has been posted online, which shows the impact of the collision.

In the footage, Florsch's car is seen to fly above the crash barrier and through the wire fence above.

The car is caught by the fence, which upends the nose and dramatically reduces the speed of the vehicle.

Her car eventually falls to the floor the right side up, with photographers and race stewards scrambling for cover.

Florsch and three other people were taken to hospital as the race was stopped for an hour.

She has since tweeted: "Just wanted to let everybody know that I am fine but will be going into Surgery tomorrow morning.

"Thanks to the @ fia and @hwaag_official @ MercedesAMGF1 who are taking great care of me.

"Thanks to everybody for the Supporting messages. Update soon. "

Messages of support have come in from across the motorsport world.

"All my thoughts are with Sophia Florsch after the accident at Macau. Let's hope to receive positive news soon! Keep strong, "tweeted Fernando Alonso.

Jenson Button wrote on twitter: "Sorry to hear that @SophiaFloersch has a spinal fracture but looking at the horrific accident she had today in Macau it could have been so much worse. #getwellsoonSophia "