Tennessee football falls to Missouri; Vanderbilt next for bowl

November 18, 2018 Sports, unitedstates Comments Off on Tennessee football falls to Missouri; Vanderbilt next for bowl 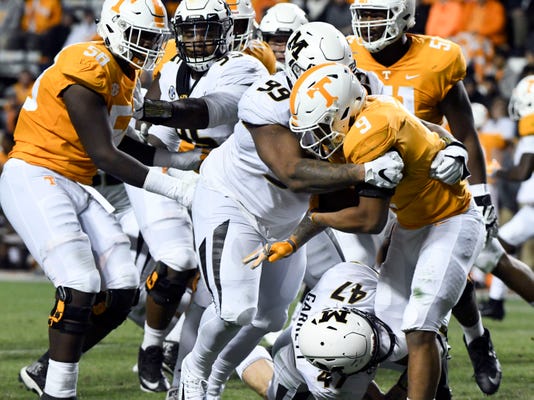 If Tennessee plays against Vanderbilt the way it did last weekend against Kentucky, the Vols should have no trouble qualifying for a bowl game. If the Vols replicate Saturday's effort against Missouri, they'll likely be home for the holidays.

Tennessee continued its season-long Jekyll-and-Hyde act with a 50-17 loss to Missouri (7-4, 3-4 SEC) at Neyland Stadium, meaning the Vols (5-6, 2-5) must beat Vandy on the road in the regular-season finale to reach a bowl.

Saturday's clunker came on the heels of Tennessee's most complete performance – a 24-7 victory over a Kentucky team that rallied to beat Missouri earlier this season.

"We do not have consistency right now, and that's something we need to work on," Vols center Ryan Johnson said. "It's definitely frustrating to lose like this, but we've got to focus on the next game."

The most impressive part of Tennessee's win over Kentucky was how the Vols whipped the Wildcats in the trenches.

That did not carry forward to Saturday.

Missouri has a quarterback that NFL teams covet in fourth-year starter Drew Lock, and its wide receivers are blessed with speed. But the Tigers also had their way with the Vols up front.

"They played harder than us," Tennessee linebacker Daniel Bituli said.

Tennessee had nine plays for a negative yardage. Another four runs were stopped for no gain. Missouri had three plays go for negative yardage and one other run of zero yards.

Missouri's physical play knocked quarterback Jarrett Guarantano out of the game after one quarter. Coach Jeremy Pruitt did not have an update on Guarantano's status after the game.

The Vols' inconsistent performance is becoming a prevailing narrative for this season. They sandwiched a road victory over Auburn between losses to Florida and Georgia and Alabama and South Carolina. One week after an uninspiring 14-3 victory over Charlotte, Tennessee clobbered a Kentucky team that had aspirations of a New Year's Six bowl.

"We've got to sustain that high level every week, every day," Tennessee defensive end Kyle Phillips said. "That's how the great teams are great. That's why the average teams are not. We've got to learn how to sustain. "

Missouri is better than its record suggests. The Tigers squandered fourth-quarter leads in losses to South Carolina and Kentucky.

But the Tigers are not Alabama, even though the scoreboard Saturday suggested that.

With 5:30 left in the fourth quarter at Neyland pic.twitter.com/PwxvjMG75v

That does not mean Tennessee will not go to a bowl. If we've learned anything from this Tennessee season, it's that one game is not a predictor of what will happen the following Saturday.

"Finish this last game the way we're supposed to. Finish this season right, "running back Ty Chandler said. "If we want to go to a bowl game, well, we have to go get it. It's not going to get handed to us. "

More than a bowl bid will be at stake in Nashville.

"Our pride is on the line," Bituli said.