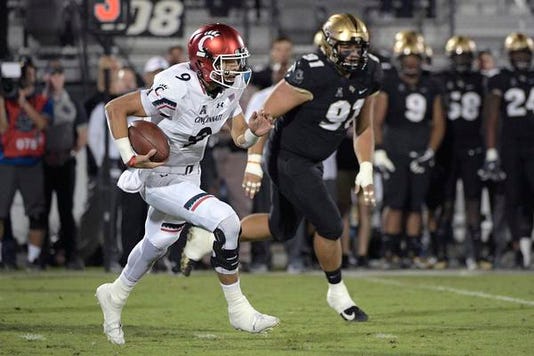 Even with a season that has exceeded expectations, Luke Fickell coach and the Cincinnati University football team were spoiled by truth Saturday night 35-13 at UCF.

"There are still some ways to go," said Fickell. "I was watching tonight. I do not say we can not win it. I do not say that we do not have it but I still believe we have ways to go. I do not know our people. I want them to know that this is what we need to kill. "

UC (9-2, 5-2 Eastern American Athletics Conference) was brought down by UCF (10-0, 7-0 AAC East) in a game that has renowned the Divisional title for the Knights. There was a national television audience featuring ABC, with a total of 47,795 houses at the Spectrum Stadium in Orlando.

Part of the game types, and a preview:

There was a great average speed: Much of the length of UCF woods was rapidly and quickly, and it showed both running and running games. UCF stopped two touchdowns and threw it for three, including 36- and 42-a-y-a-th; Passing TD with quarterback McKenzie Milton. Milton was also on to score.

"I think the edges, the big pictures in the game that went out obviously," said Fickell. "We knew we had to put our people out there, and we knew we had to make plays outside. But it cost us in the long run."

UCF threw for 268 yards, to 127 for UC. The UC defeated the Knights 252-134, but many of the aggressive fires of Bearcats and UCF's rapid crime did not go much.

"It was not too hard to re-create (UCF crime)," said Cortez Broughton, the UC protection responsibility. "In general, things happen there. I feel that our brotherhood as a team helps us to recover from it."

Where did going past game: UC quarterback Desmond Ridder was just 11 now passing, for the last 127 yards. Ridder was ruined four times.

Long-term salesman Kahlil Lewis's five receptions for 75 yards, but he was the only thing; with more than one capture. It was a combination of employers who were not divorced and tightly broadcasting with UCF, issues that raised their heads especially earlier this season.

Ridder in care: Redshirt today ran a lot of Ridder nights. With his team behind in the third quarter, Ridder TV showed his lively monologue delivery to the attacking online seats. All the lines sat quietly, placing ears.

That's a signing point, and Ridder said he's one. And, maybe it's up to another three years.

Best meeting: Fickell knew that UC had met his game.

"There were some situations where we were not able to play the way we wanted to play, and perhaps because of similar situations," he said. "That's where you have to challenge yourself. Those who are better tonight. The best thing we've seen since we played."

"It's a great deal," said Broughton. "UC started, the clearances and the problems that were growing. You'll get tips like this, you need to do more. If this happens, it's about how you will respond."

"Sometimes someone who is doing something wrong is a small idea last year," said Campbell. "Everyone got together to do things. I think we were there tonight. Some of us were rough."

Night before: The game was stopped about fifty times for UC wounds. No any, at least in the first instance.

"These things are a bit harder when the game is like it," said Fickell. "I think that's one of those things that we did not have to go through this year. When you make good hunting, it's harming something else. That picture (helmet helmet) taken by Desmond Ridder, can not tell me that you did not hurt so much and anyone brought into the game.

"To see him recover and continue, he will pay us. If we are honest with ourselves and we can make a real difference between us and what's the best thing, we will be better placed as we move forward. "

On deck: UC will complete a regular season against East Carolina (3-7, 1-6 AAC East) Friday at Nippert Stadium at 3:30 p.m. the CBS Sports Network. In the coming weeks, UC will appear in the first bowling game from the 2015 season.