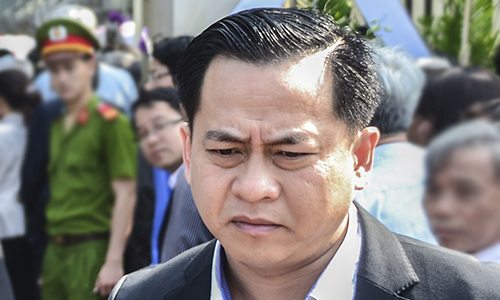 On the morning of November 27, the People's Court in Ho Chi Minh City will open up the test against Phan Van Anh Vu (Vu Nham, 43, Chairman of the Stock Company Stock Company of the North-South) . Misuse of status and authority to adequate assets Article 355 of the Criminal Code 2015, the penalty framework for 20 years to life.

Tran Phuong Binh, 59, who was Chief Executive and vice chairman of the Board of Directors of Dong A Bank (DAB), was arrested with 24 other crimes. Moving to one item against the rules of the State on economic governance, causing adverse effects (Article 165 of the Criminal Code 1999) and Lack of responsibility which adversely affects (Section 285 of the Criminal Code).

According to their conviction, DAB was established in 1992 with a contracted capital of VND5,000 billion. Of what, Mr Binh's family has over 10%; Phu Nhuan Cooperative Stock Company (PNJ) 7.7%; Bac Nam Construction Component Stock Company 79 Near 13%; Office of City HCM Party Committee by 13% …

During its investigation process, the DAB State Bank finds many mistakes to investigate. The authorities pay a total unpaid debt to DAB 20.233 billion. In particular, it is difficult to get VND7, 960 billion, and no more than 5,600 billion back debt.

By August 2015, DAB was placed under a specific control, on its best to carry out financial checks on the system. The result showed that DAB's financial shortage was 2,089 billion dollars, 62,154 tons of gold, a 416 billion dollar tube.

The investigation confirmed that Mr Tran Phuong Binh had been resisting his position and asking his sub-divisions to make a series of serious crime, resulting in the loss of the VND3,608 billion bill. This is the main cause of global DAB loss over 31 trillion dong, a balance of over 25 trillion dong and a total total value of just 47 trillion dong.

Mr Binh directs the low level to make a series of VND1.160 billion bills, and buy 74 million shares of the name DAB and relatives. By the end of 2007, he ordered the Finance Department 23,252 tons of gold (not doubled) to be sold to the gold names in Ho Chi Minh City, Give money to balance the money.

In 2008, the former DAB general director 5.75 million of the DAB from the Viet Viet Fund received 327 billion dollars. The money comes from the short-term collection of more than VND30 billion from Nguyen Hong Anh (DAB gold leavers) and VND122 billion from a & # 39; sold the Richland Hill condo project.

At the same time, Don gave loans from Ninh Thinh and Sao Bhietnam from 197 billion dollars too. After that, he set up the lowest of 20 votes to deal with each principle and the interest of the two companies, resulting in a DAB loss of 234 billion.

By managing the low level for collecting a number of documents, Mr Binh Binh had 2,057 billion and fellow DAB beneficiaries.

For active misconduct actions, Mr Binh defeated DAB over 1,551 billion. Out of that, there were almost 470 billion due to its non-regulatory assets for 219 companies to pay interest outside the capital building; nearly 385 billion historic exchange business; more than 610 gold accounts; More than 53 billion in the census settlement with a customer for 1,900 gold loans …

Vu Dôm DAB did not get over

In 2013, DAB suffered a long deal, much money and gold in the finances. Mr Binh aims to raise a chartered capital from 5,000 to 6,000 billion to attract investment, to be difficult to translate, to improve the situation.

In 2014, Mr Binh agreed to Vu Dôm to sell 60 million DAB shares with his 600 billion price to become the main constituent, the largest DAB power. However, Vu Aluminum only bet 220 land sites in Da Nang worth 400 billion. The remaining VND200 billion was paid by Mr Binh from DAB's compensation property.

DAB should then increase the unsuccessful promotion of the unparalleled business capital value to the Bac Nam Company 79 an original sum of 600 billion and more than 9.5 billion interest. Human Order Survey has been decided, which makes Vu unaccompanied about 203 billion DAB total.

In addition, their survey group collected five written papers by Do Thanh Hung (head of DAB Headquarters) for non-representation. According to Binh's order, from October 2012 to March 2015, Hung has spent $ 293 billion to buy $ 13.9 million. $ 13.4 million is said to support Vu Vu, but did not return to DAB.

In September, Vu Aluminum has paid 13 billion, Mr Binh over 4 billion, 500,000 Nguyen Hong Anh. Authorities also issued over 125 million sections of DAB under the name of the South North Company 79; 5 real buildings and defenses and a great detention of secrets …

Before being prosecuted in this case, on 30 July, Vu Nhom was convicted to 9 years imprisonment with the Hanoi People Court Court Secret disclosure of the State's confidentiality.