November 19, 2018 U.S., unitedstates Comments Off on Vote-Stealing Battle in Florida Portends More Distrust in System for 2020 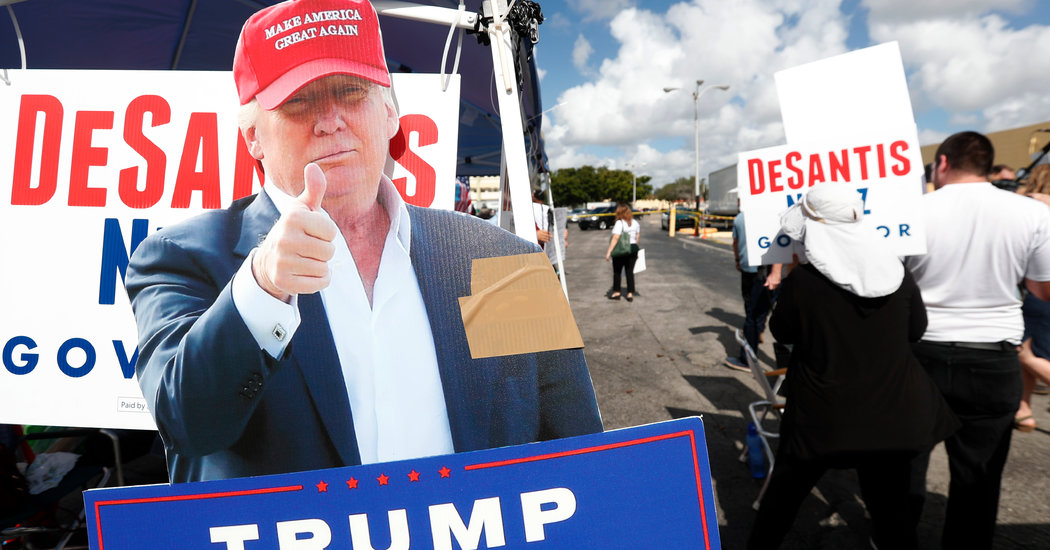 TALLAHASSEE, Fla. – The chaotic images out of Florida's election recount last week – the brigade of Washington lawyers, the déjà vu meltdown of the tallying in Broward County, the vitriolic charges and countercharges – have prompted flashbacks among the electorate of the 2000 presidential election.

Yet to the combatants in both parties fighting over impossibly tight races for governor and senate, the 2018 election was less about revisiting past political traumas than about setting the stage for the bitter 2020 campaign ahead. The legal and political skirmishing in the state, Republicans and Democrats say, has been an ominous dry run for messaging and tactics about fraud and vote-stealing that threaten to further undermine confidence in the electoral system.

Florida emerged from the 2018 midterms with a fortified reputation as the nation's most competitive battleground, a state whose political culture most closely reflects the slashing political style of its adopted son, President Trump – with candidates focused on energizing voters with visceral, at times over- the-top, messages.

That approach is "not a good long-term strategy for the party or for the country," said Miami-area Representative Carlos Curbelo, one of two Republican House members in Florida to lose their seats to Democrats.

"A lot of Republicans are happy because we had successful statewide candidates, but those races were very, very close, and we lost some races too, especially in South Florida," said Mr. Curbelo, 38, who bucked his party by adopting moderate positions on environmental issues and immigration. "As for 2020, I'm really worried that it is going to get a lot worse before it gets better."

It was only this weekend, almost two weeks after the election, that Florida's two biggest races were determined, with Senator Bill Nelson, the Democratic incumbent, conceding to Republican Gov. Rick Scott on Sunday, and Andrew Gillum conceding the governor's race to his G.O.P. rival, Ron DeSantis, the day before.

In the interim, Democrats pursued numerous lawsuits challenging the vote-counting process in the Senate race – though Mr. Nelson's odds of overtaking Mr. Scott were always fairly low – while Republicans lobbed unfounded accusations of voter fraud at the Democrats. The bickering focused even greater scrutiny on an American election system that is straining under human and mechanical error.

The acrimony in Florida followed a contentious, weekslong fight over voter suppression in Georgia, where the Republican secretary of state was overseeing a governor's race in which he was also a participant. Those battles may foreshadow what 2020 will look like in other closely contested states, especially ones with increasingly diverse populations where conservative-dominated legislatures have tried to put more restrictions on voting while stoking paranoia over stolen elections.

"If what's going on now is transposed to a presidential election, it would tax our system in a way that is much greater than what happened in 2000," said Edward Foley, a professor of election law at Ohio State University and one of the country's pre-eminent scholars on recounts. "As much as there was fighting in 2000, the rhetoric did not get as caustic as what we've seen in Florida this year – the allegations of stealing and rigging."

Some longtime battlegrounds, like Indiana, Ohio and Missouri, have mostly tilted to Republicans. Others, especially states in the upper Midwest, are more elastic, veering from party to party depending on the political climate; this year, Democrats made significant gains there.

Florida, by contrast, remains mired in a bitter partisan trench warfare with few last-minute undecided voters open to persuasion, which encourages the use of ever more powerful political artillery during the campaign and bitter fights over the counting of votes after the election.

As the recount proceeded Mr. Scott was exhorting Mr. Trump to post bombastic tweets in an attempt to force Mr. Nelson into conceding, according to Republicans with knowledge of the exchange.

"In a lot of other states, including Texas, you see a big crossover vote, but in Florida it's all about intensity, so it's basically all combat, all the time," said Jeff Roe, who worked on an independent expenditure campaign that supported Mr. DeSantis's run for governor.

"Everybody just straps on their jerseys, tightens their chin straps, and they just run over each other," he said. "That's going to be even more intense next time because this is basically Donald Trump's home state, and he hovers over everything in Florida."

The increasingly sharp tone – evident in accusations of widespread fraud at the polls by Mr. Scott; the state's Republican senator, Marco Rubio; and President Trump himself – has created running room for politicians to act in an ends-justify-the-means way, strategists and political historians said.

Mr. Trump, who made baseless claims of voter fraud after Hillary Clinton surpassed him in the 2016 popular vote, has led the way in denigrating the proceedings in Florida. He tweeted that "large numbers of new ballots showed up out of nowhere" and that "an honest vote count is no longer possible – ballots massively infected."

Mr. Trump also said last week that people in Florida were disguising themselves so they could vote multiple times. "Sometimes they go to their car, put on a different hat, put on a different shirt, come in and vote again," the president said. He offered no support for his account other than to say he had heard "friends talk about it;" whether he was serious or simply being mischievous, it served the purpose of further clouding the vote's legitimacy.

Al Cardenas, who served in Florida's Republican Party during former Governor Jeb Bush's terms in office, said he was struck in particular by Mr. Rubio's willingness to fully engage in the fight over the recount. In the days following the race, Mr. Rubio said that Democrats were sending lawyers to Florida "to steal" the election.

"I do not remember Marco using this tone before, I do not know what triggered him," Mr. Cardenas said. "He was fairly quiet for the election, but now he's revved up his rhetoric to seventh gear."

Mr. Rubio's tone softened on Sunday. He praised Mr. Nelson on Twitter for serving in the Senate "with a decency & dignity that is increasingly rare in politics."

Equally striking is how aggressive Democrats have been in Florida and other states with exceedingly close races. National Democratic Party figures, like Hillary Clinton and Senator Cory Booker of New Jersey, a likely 2020 contender, have helped the party solicit money to pay for the legal battle in Florida.

A number of Democrats have also started to question the legitimacy of the electoral process in much starker terms. In addition to raising the usual questions about voter suppression and sinister motives by G.O. lawmakers, Democrats are flipping the script and using Republicans' tactics against them.

Mr. Booker said last week that the governor's race in Georgia was being "stolen" from Stacey Abrams, an African-American, by Brian Kemp, who as secretary of state pushed for the kind of strict proof-of-identity voting requirements that Democrats say are intended to disproportionately impact poorer and minority voters. Ms. Abrams, trailing Mr. Kemp in the vote count 10 days after the election, said on Friday she was ending her bid for governor.

Senator Sherrod Brown of Ohio made the same claim, albeit more bluntly. "If Stacey Abrams does not win in Georgia, they stole it. It's clear. It's clear, "he said. He further accused Republicans of rigging elections because "there's way more of us than there are them." Suggesting that Mr. Kemp's purge of voter rolls was intended to boost his chances of winning.

As Mr. Nelson and Mr. Gillum ended their campaigns over the weekend, Democrats began regrouping and assessing lessons learned – and began fretting, yet again, that they had failed to match the Republicans' intensity.

While most Democratic campaigns came close to hitting their turnout targets, fired-up Republicans did better, narrowly prevailing in the two marquee races despite having 257,000 fewer registered voters statewide.

Democrats hope that dynamic will change in 2020, thanks in part to passage of a statewide referendum restoring voting rights to an estimated 1.4 million people with felony convictions. But they are haunted by the specter of past defeats.

During the 2000 recount, Al Gore was criticized for not fighting with the same hardnose tactics as Republicans, who employed an aggressive political and public relations component to accompany their legal efforts.

But not all Democrats think that borrowing the Republicans' rhetoric is sound strategy.

"It's not constructive at all, and it's just appealing to our base," said Ed Rendell, the former Democratic governor of Pennsylvania who advised Mr. Gore's campaign in 2000. "It's destructive to the process."

Other Democrats insist that they are simply adjusting to the new reality.

"In a better world, when they go low we go high," said Philippe Reines, the chairman of the Democratic National Committee at the time of the 2000 recount, and a longtime aide to Mrs. Clinton. "In the world we're living in, it's hell no, we're not giving up that seat without a fight."