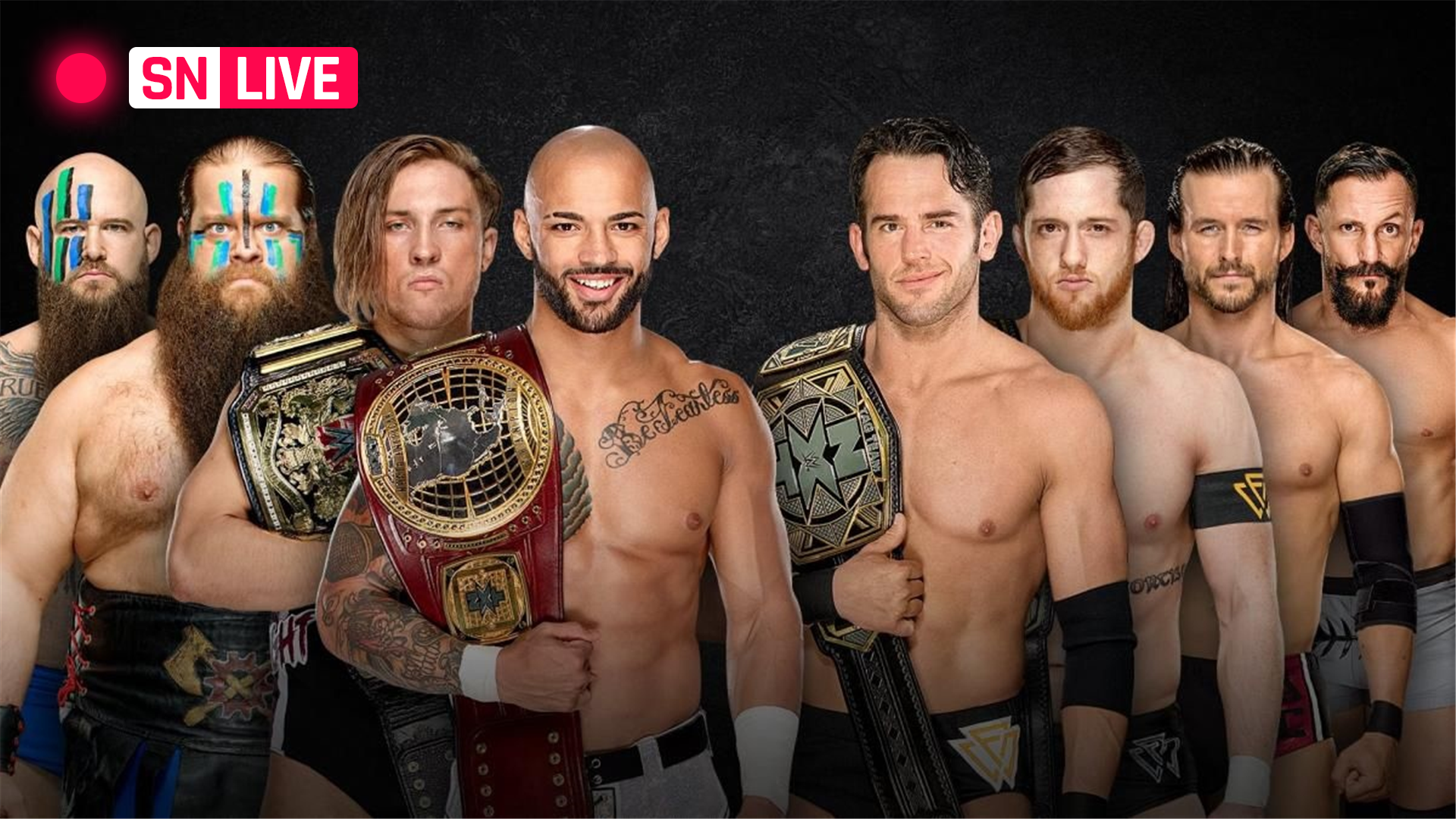 Join DAZN and watch more than 80 fight nights a year

Stay locked in as Sporting News will be providing live coverage of the final WWE NXT Takeover event of 2018.

8:24 p.m.: Dream decides to attack the injured leg of Ciampa and channels Bret Hart by locking in a figure four leglock on the post outside. Ciampa actually tapped but it would not count due to it not being a legal submission hold. Dream then locks in a figure four that nearly elicits the tap from Ciampa. The two call upon a recent 205 Live sequence as Dream suplexes Ciampa from the inside all the way to the floor.

8:20 p.m.: It's poetic that Hulk Hogan was the one who voted Patrick Clark off of Tough Enough and now Clark, as Velveteen Dream, trolls him at every turn. After some back and forth, Dream briefly hulks up, lands the right hands and a trio of leg drops for a near fall. How did he not win Tough Enough?

8:15 p.m.: It's a battle of wits early as Dream and Ciampa look to outsmart each other. Dream channels Hulk Hogan and lands a big boot but is unable to hit the leg drop. Ciampa smashes Dream with a running knee that puts his opponent on Dream street, literally.

8:05 p.m.: It's time for Velveteen Dream to get his chance at the NXT title when he faces Tommaso Ciampa. Dream comes out dressed like Hollywood Hogan with a "Dream Over" shirt in the NWO black & white. Ciampa enters clutching his world title like he's afraid to let it go.

7:54 p.m.: In a wonderful sequence, Gargano appears to beg for Black to finish him off to make amends for his transgressions, but he ducks the Black Mask and sinks in the Gargano Escape. Black manages to escape, crushes Gargano with a knee, lands a Black Mask, but holds Gargano up! Black stares him in the eyes, says he's absolving him of his sins and annihilates him with a Black Mask for the three count. Excellent match.

7:51 p.m..: The sequences are fast, furious and hard hitting. Dueling chants for these two as these two give it their all. Gargano sets up for a superkick and Black invites him to finish him by sitting cross legged. Gargano misses the running knee, but lands a superkick and then a running knee for a near fall.

7:45 p.m.: Black finally gets the upper hand with some vicious strikes, but Gargano eventually takes advantage of Black missing a moonsault off the top rope to the floor and lands a diving spike DDT. Gargano gets caught up talking trash and the two engage in an exchange of strikes. Gargano hits a reverse 'rana and Black pops up and drives a running knee into the face of Gargano.

7:41 p.m.: Gargano does an excellent job being one step ahead of Black from the opening bell. He's using Black's aggression against him and dodges a majority of his strikes while landing some slick counters. But Gargano's arrogance might get the best of him as Johnny Wrestling is not Johnny Striking.

7:34 p.m.: Johnny Gargano and Aleister Black look to settle their differences in a grudge match after it was revealed that Gargano was the one who attacked Black. Gargano enters to some jeers while sporting a new logo that meshes the smiley face with The Punisher. Black is wearing a vest of spikes and absolutely means business. This should be good.

7:25 p.m.: Shafir and Duke interfere again as Sane goes for an In-Sane Elbow, but Dakota Kai comes to the rescue. Duke and Shafir get the upper hand and Io Sharai sprints to the ring and takes the out with a beautiful moonsault from the top rope to the floor. Sane goes for the elbow, but Baszler counters into a pin attempt, gets the 1-2-3 and retains the title. Unbelievable sprint.

7:22 p.m..: Baszler tries to make it a short night by going for another choke, but Sane fends her off. In a vicious spot, Sane reverses a suplex on the edge of the apron and turns it into a spike DDT. Mamma Mia! Sane rolls Baszler back into the ring, nails her with the In-Sane Elbow and takes the second fall. This thing is a sprint.

7:17 p.m.: Sane comes out like a bat out of hell and is all over Baszler. After Baszler fakes an injury, fellow MMA Horsewomen Marina Shafir and Jessamyn Duke head to the ring and attack Sane. Baszler immediately sinks in the choke to earn the first fall in the match.

7:11 p.m.: Now that Riddle and Hero is behind us, it's time to move on to the NXT Women's Championship as Shayna Baszler looks to defend against former champion Kairi Sane in a 2-out-of-3 falls match.

7:08 p.m.: Welp, that was quick. Hero answered Riddle's challenge and was met with a flying knee to the jaw that knocked Hero flat. Matt Riddle takes home the win in less than 10 seconds.

Oh, OKAY! A match that ended just as quickly as it started, @ SuperKingofBros gets the better of @ KassiusOhno! #NXTTakeOver pic.twitter.com/teHE9OoVK7

7:04 p.m. Welcome to Sporting News' coverage of NXT TakeOver: WarGames 2! It appears we have a last minute edition to the card as Matt Riddle is heading to the ring for what appears to be a showdown with Chris Hero!

– Johnny Gargano talks with SN about changing his style, Daniel Bryan and putting pressure on himself in big events.

– What is your favorite War Games match? SN gives you the top seven.