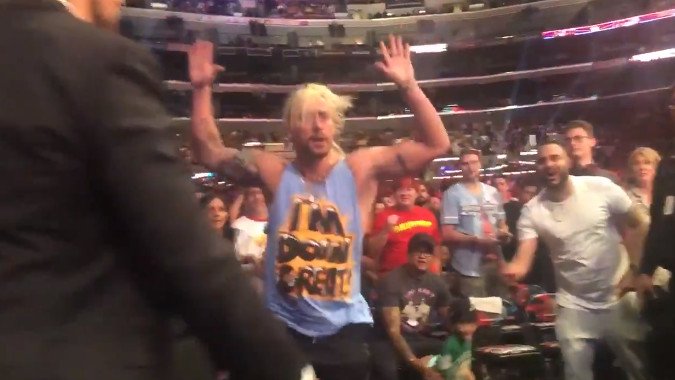 As noted, former WWE Superstar Enzo Amore was sitting in the second row for last night's Survivor Series pay-per-view at the Staples Center in Los Angeles. Attempting to hide with a wig and a hooded sweatshirt, Enzo ended up revealing himself and getting booted by security after word started going around that he was there.

This was not something WWE had planned with Enzo. PWInsider reports that most everyone within the company was down on the stunt by Enzo, and there were said to be some pretty angry wrestlers backstage. Security ended up taking Enzo out through an exit door in the backstage area but he had no interaction with anyone there, and was only backstage for about 10 seconds.

There is talk that a young female fan was injured during the debacle when security quickly swarmed Amore. A stretcher was brought to take her away and it was said that the young woman suffered an arm injury. The fan was holding her arm, clearly in pain, before medical staff tended to her. The woman was reportedly checked out and given an icepack for her arm but she did return to her seat for the rest of the show.

Enzo, who also made headlines this weekend due to being booted from a Delta Airlines flight after he did not listen when the crew told him to stop vaping, took to Twitter after the Survivor Series stunt and commented on it. You can see his tweet below along with more videos from the incident.

Amore is scheduled for his first live concert at Whisky A Go Go in West Hollywood tonight around the time RAW is ending. Enzo or supporters of his placed a bunch of flyers on cars parked at the Staples Center to advertise concert. Reader Ben Gordon sent us a photo of one of the flyers that was found on his friend's car.

You can see Enzo's tweet, the flyer left during Survivor Series and more shots from the ringside incident below:

Apparently you can not vape inside the staples center. #HowYouDoin!

Enzo got kicked out #SurvivorSeries pic.twitter.com/DtPNKFVGEV

How do you doin pic.twitter.com/LYyS9P3Kbx

How YOU doin, #SurvivorSeries?@ real1 pic.twitter.com/DFUi8dJZjF

To be clear, that's Enzo behind Front Row Man of Mystery.

My video of the wrestler formerly known as Enzo Amore trying to interrupt #SurvivorSeries. @WWE security not having any of it. He is taken down quickly. pic.twitter.com/2jdRtOe36z

bruh …… like how salty are you, especially when you're on these streets shouting how great you are without WWE